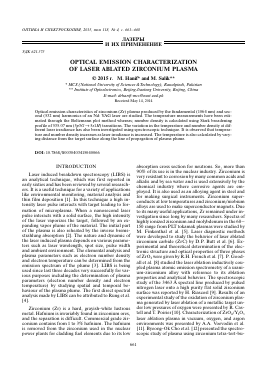 Optical emission characteristics of zirconium (Zr) plasma produced by the fundamental (1064 nm) and second (532 nm) harmonics of an Nd: YAG laser are studied. The temperature measurements have been estimated through the Boltzmann plot method whereas; number density is calculated using Stark broadening profile of 535.07 nm (5p3G^ 5s1H) transitions. The variation in the temperature and number density at different laser irradiance has also been investigated using spectroscopic technique. It is observed that temperature and number density increases as laser irradiance is increased. The temperature is also calculated by varying distance from the target surface along the line of propagation of plasma plume.

Laser induced breakdown spectroscopy (LIBS) is an analytical technique, which was first reported in early sixties and has been reviewed by several researchers. It is a useful technique for a variety of applications like environmental monitoring, material analysis and thin film deposition [1]. In this technique a high intensity laser pulse interacts with target leading to formation of microplasma. When a nanosecond laser pulse interacts with a solid surface, the high intensity of the laser vaporizes the target, followed by an expanding vapor plume of the material. The initial part of the plasma is also reheated by the inverse bremsstrahlung absorption [2]. The nature and dynamic of the laser induced plasma depends on various parameters such as laser wavelength, spot size, pulse width and ambient environment. The elemental analysis and plasma parameters such as electron number density and electron temperature can be determined from the emission spectrum of the plume [3]. LIBS is being used since last three decades very successfully for various purposes including the determination of plasma parameters (electron number density and electron temperature) by studying spatial and temporal behaviour of the plasma plume. The first direct spectral analysis made by LIBS can be attributed to Rung et al. [4].

Zirconium (Zr) is a hard, grayish-white lustrous metal. Hafnium is invariably found in zirconium ores, and the separation is difficult. Commercial grade zirconium contains from 1 to 3% hafnium. The hafnium is removed from the zirconium used in the nuclear power plants for cladding fuel elements due to its low

absorption cross section for neutrons. So, more than 90% of its use is in the nuclear industry. Zirconium is very resistant to corrosion by many common acids and alkalis and by sea water and is used extensively by the chemical industry where corrosive agents are employed. It is also used as an alloying agent in steel and for making surgical instruments. Zirconium super-conducts at low temperatures and zirconium/niobium alloys are used to make superconductor magnets. Due to its many useful applications, Zr remained under investigation since long by many researchers. Spectra of highly ionized zirconium and molybdenum in the 60— 150 range from PLT tokamak plasmas were studied by M. Finkenthal et al. [5]. Laser diagnostic methods were developed to study the behavior of laser ablated zirconium carbide (ZrC) by D.P. Butt et al. [6]. Experimental and theoretical determination of the electronic structure and optical properties of three phases of ZrO2 were given by R.H. French et al. [7]. P. Good-all et al. [8] studied the laser ablation inductively coupled plasma atomic emission spectrometry of a uranium-zirconium alloy with reference to its ablation properties and analytical behavior. The spectroscopic study of the 3463 A spectral line produced by pulsed nitrogen laser onto a high purity flat solid zirconium surface was reported by H. Riascosl [9]. Results of an experimental study of the oxidation of zirconium plasma generated by laser ablation of a metallic target under low pressures of oxygen were presented by R. Cas-tell and T. Poirier [10]. Characterization of ZrO2/Y2O3 laser ablation plasma in vacuum, oxygen, and argon environments was presented by A.A. Voevodin et al. [11]. Byeong-Ok Cho et al. [12] presented the spectroscopic study of plasma using zirconium tetra-tert-bu-

In the present work, we have investigated the Zr plasma produced by the fundamental (1064 nm) and second (532 nm) harmonics of a nanosecond pulsed Nd:YAG laser beam focused on the Zr target in air. The optical emission has been spatially resolved by adjusting the delay and scanning the plume along its length in the direction of its propagation. We have calculated the electron temperature using Boltzmann plot method and number densities using the Stark line broadening parameter at different points of the plume. Further we have studied the variation of the electron temperature and the electron number density with the laser irradiance as well.

The experimental setup is shown in Fig. 1, and is the same as that described in our previous work [18— 20]. Briefly we used a Q-switched Nd:YAG (Quantel Brilliant) pulsed laser having pulse duration of 5 ns

and 10 Hz repetition rate which is capable of delivering 400 mJ at its first (1064 nm) and 200 mJ at second (532 nm) harmonics of the Nd:YAG laser. The laser pulse energy was varied by the flash lamp Q-switch delay through the laser controller, and the pulse energy was measured by a joulemeter (Nova-Quantel 01507). The laser beam was focused on the target surface using convex lens of 20 cm focal length. The target material was mounted on a three dimensional sample stage, which was rotated to avoid the non-uniform pitting of the target. The spectra were obtained by averaging 10 data of single shot under identical experimental conditions. The radiation emitted by the plasma was collected by a fiber optics (high-OH, core diameter 600 ^m) having a collimating lens (0—45° field of view) placed at right angle to the direction of the laser beam. The optical fiber was connected with the LIBS-2000 detection system (Ocean Optics Inc.) to measure the plasma emission. The LIBS-2000 detection system is equipped with five spectrometers each having slit width of 5 ^m, covering the range between 220 to 720 nm. The uncertainty in the measurements is ~0.02 nm. In the experiments, the time delay between the laser pulses and the start of the data acquisition is about 3.5 ^s, whereas the system integration time is 2.1 ms. In order to record the emission spectrum, the LIBS-2000 detection system was synchronized with the Q-switch of the Nd:YAG laser. The flash lamp out of the Nd:YAG laser triggered detection system through a four-channel digital delay/pulse generator (SRS DG 535).The LIBS-2000 detection system triggered the Q-switch of the Nd:YAG laser. All five spectrometers installed in the LIBS-2000 are manufactured calibrated in efficiency using the DH-2000-CAL standard light source. The data acquired simultaneously by all five spectrometers were stored on a PC through the OOILIBS software for subsequent analysis.

In the present work we have studied the zirconium plasma generated by the fundamental (1064 nm) and second (532 nm) harmonics of a nanosecond pulsed Q-switched Nd:YAG laser by placing the target in air. Zirconium is a transition metal and its ground state is 4d 25s2. Figure 2a shows the window of emission spectrum of zirconium plasma covering the spectral region from 514 to 540 nm. All the lines in this region belong to neutral zirconium (Zr I). Assignment of these lines is done using reference data [13] as listed in Table and their transitions are shown in the Fig. 2b.

Temperature is one of the most important properties of any excitation source. Determination of elec-

Spectroscopic parameters of Zr I lines