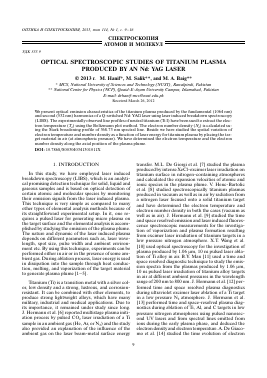 In this study, we have employed laser induced breakdown spectroscopy (LIBS), which is an analytical promising detection technique for solid, liquid and gaseous samples and is based on optical detection of certain atomic and molecular species by monitoring their emission signals from the laser induced plasma. This technique is very simple as compared to many other types of elemental analysis methods because of its straightforward experimental setup. In it, one requires a pulsed laser for generating micro plasma on the target surface and the elemental analysis is accomplished by studying the emission of the plasma plume. The nature and dynamic of the laser induced plasma depends on different parameters such as, laser wavelength, spot size, pulse width and ambient environment etc. By using this technique, experiments can be performed either in air or in the presence of some ambient gas. During ablation process, laser energy is used in dissipation into the sample through heat conduction, melting, and vaporization of the target material to generate plasma plume [1—5].

Titanium (Ti) is a transition metal with a silver color, low density and a strong, lustrous, and corrosion-resistant. It can be combined with other elements, to produce strong lightweight alloys, which have many military, industrial and medical applications. Due to its importance, it remained under study since long. J. Hermann et al. [6] reported multistage plasma initiation process by pulsed CO2 laser irradiation of a Ti sample in an ambient gas (He, Ar, or N2) and the study also provided an explanation of the influence of the ambient gas on the laser beam-metal surface energy

number density, of electron, atom, and ion temperatures, of plasma produced by KrF excimer laser ablation of titanium dioxide and monoxide targets, using temporally and spatially resolved optical emission spectroscopy. A. De Giacomo et al. [15] presented spectroscopic investigation of the technique of plasma assisted pulsed laser deposition of titanium dioxide using KrF excimer laser. A. De Giacomo [16] studied time and space resolved optical emission spectroscopy to investigate the evolution of the plasma produced by the interaction of UV laser beam with a metallic target of titanium at different pressures and at distances up to 3 mm from the target. E. Restrepo and A. Devia [17] carried out spectroscopic analysis of plasma properties produced in a new type of pulsed-vacuum arc system, to produce TiN coatings using a vacuum chamber filled with nitrogen and calculated electron and excitation temperatures by means of titanium atomic lines. D. Grojo and J. Hermann [18] investigated the femtosecond laser ablation of Ti, Zr, and Hf by means of in situ plasma diagnostics using Ti-sapphire laser by placing the target material in vacuum chamber. A. De Giacomo et al. [19] presented laser induced plasma obtained in air at atmospheric pressure by the interaction of fs (femtosecond) or a ns (nanosecond) laser pulse with a metallic titanium target which has been investigated by optical emission spectroscopy. V.J. Dann et al. [20] analyzed optical emission from TiO2 plasma, generated by a nanosecond laser and the spatio-temporal distribution of the plasma parameters such as electron temperature and density were characterized based on the study of spectral distribution of the line intensities and their broadening characteristics. A.A.I. Khalil et al. [21] applied LIBS technique for parametric studies of titanium plasma generated by Nd: YAG on the surface of a solid Ti target at ambient pressure. M. Cirisan et al. [22] investigated the expansion of the plasma plume induced by the impact of a nanosecond laser beam (k = 1064 nm) on the surface of metallic samples (Al, Fe, and Ti) in the open air by means of fast photography.

The experimental system is the same as described in our previous work [23—25]. Briefly we used a Q-switched Nd: YAG (Quantel Brilliant) pulsed laser having pulse duration of 5 ns and 10 Hz repetition rate which is capable of delivering 400 mJ at 1064 nm and 200 mJ at 532 nm. The laser pulse energy was varied by the flash lamp Q-switch delay through the laser controller, and the pulse energy was measured by a Joule meter (No-va-Quantel 01507). The laser beam was focused on the titanium target by placing it in air (at atmospheric pressure) using convex lens of 20 cm focal length. The sample was mounted on a three dimensional sample stage, which was rotated to avoid the non-uniform pitting of the target. The distance between the focusing lens and the sample was kept less than the focal length of the lens to prevent any breakdown of the ambient air in front of the target. The spectra were obtained by averaging 10 data of single shot under identical experimental conditions. The radiation emitted by the plasma were collected by a fiber optics (high-OH, core diameter: 600 ^m) having a collimating lens (0—45° field of view) placed at right angle to the direction of the laser beam. The optical fiber was connected with the LIBS-2000 detection system (Ocean Optics Inc.) to measure the plasma emission. The emission signal was corrected by subtracting the dark signal of the detector through the LIBS software. The LIBS-2000 detection system is equipped with five spectrometers each having slit width of 5 ^m, covering the range between 220 to 720 nm. The uncertainty in the measurements is ~0.02 nm. All the five spectrometers installed in the LIBS2000 are manufactured calibrated in efficiency using the DH-2000-CAL standard light source. The data acquired simultaneously by all the five spectrometers were stored on a PC through the OOILIBS software for subsequent analysis. In the experiments, the time delay between the laser pulses and the start of the data acquisition is about 3.5 ^s, whereas the system integration time is 2.1 ms. In order to record the emission spectrum, the LIBS-2000 detection system was synchronized with the Q-switch of the Nd: YAG laser. The flash lamp out of the Nd: YA