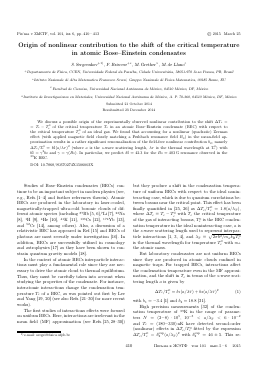 Origin of nonlinear contribution to the shift of the critical temperature

We discuss a possible origin oí the experimentally observed nonlinear contribution to the shift ATc = = Tc — Tc° ol the critical temperature Tc in an atomic Bose-Einstein condensate (BEC) with respect to the critical temperature T° ol an ideal gas. We found that accounting for a nonlinear (quadratic) Zeeman effect (with applied magnetic field closely matching a Feshbach resonance field Bo) in the mean-field approximation results in a rather significant renormalization ol the field-iree nonlinear contribution 62, namely ATc/T° ~ b*2(a/\Tf (where a is the s-wave scattering length, At is the thermal wavelength at Tc°) with &2 = 72&2 and 7 = 7(£>o). In particular, we predict 62 — 42.3 for the Bo — 403G resonance observed in the 39K BEC.

In the context of atomic BECs interparticle interactions must play a fundamental role since they are necessary to drive the atomic cloud to thermal equilibrium. Thus, they must be carefully taken into account when studying the properties of the condensate. For instance, interatomic interactions change the condensation temperature Tc of a BEC, as was pointed out first by Lee and Yang [19, 20] (see also Refs. [21-30] for more recent works).

The first studies of interactions effects were focused on uniform BECs. Here, interactions are irrelevant in the mean field (MF) approximation (see Refs. [25,28-30])

but they produce a shift in the condensation temperature of uniform BECs with respect to the ideal nonin-teracting case, which is due to quantum correlations between bosons near the critical point. This effect has been finally quantified in [25, 26] as ATc/T° ~ 1.8(a/AT), where ATc = Tc — Tc° with Tc the critical temperature of the gas of interacting bosons, Tc° is the BEC condensation temperature in the ideal noninteracting case, a is the s-wave scattering length used to represent interparticle interactions [1, 3, 4], and At = \J'2irh2/mak^,T® is the thermal wavelength for temperature Tc° with ma the atomic mass.

But laboratory condensates are not uniform BECs since they are produced in atomic clouds confined in magnetic traps. For trapped BECs, interactions affect the condensation temperature even in the MF approximation, and the shift in Tc in terms of the s-wave scattering length a is given by

suit has been achieved exploiting the high-field 403 G Feshbach resonance in the \F,mp) = |1,1) hyperfine (HF) state of a 39 K condensate where F = S + I is the total spin of the atom with S and I being electron and nuclear spin, respectively, and mp is the projection quantum number. Thus, the theoretically predicted [31] quadratic-amplitude coefficient 62 turned out to be in a rather strong disagreement with the available experimental data. There have also been some efforts to theoretically estimate the correct value of 62 in the MF approximation by considering anharmonic and even temperature-dependent traps [33], which however have not been too successful. Therefore one could expect that a more realistic prediction of the experimental value of &2Xp should take into account some other so far unaccounted effects.

The main goal of this paper is to show that, taking into account the nonlinear (quadratic) Zeeman effect and using the MF approximation, it is quite possible to explain the experimentally observed [32] value of 62 for the 403 G resonance of the hyperfine \F,mp) = |1,1} state of 39 K with no need to go beyond-MF approximation.

Recall that experimentally the s-wave scattering length parameter a is tuned via the Feshbach-resonance technique based on Zeeman splitting of bosonic atom levels in an applied magnetic field. This means that the interaction constant g = (A-Kfr?a/ma) is actually always field-dependent. More explicitly, according to the interpretation of the Feshbach resonance [34, 35]

where abg is a so-called background value of a, Bo is the resonance peak field, and A, the width of the resonance.

Thus, in order to properly address the problem of condensation-temperature shifts (which are always observed under application of a nonzero magnetic field B), one must account for a Zeeman-like contribution. It should be emphasized, however, that a single (free) atom Zeeman effect (induced by either electronic or nuclear spin) fj,aB is not important for the problem at hand simply because it can be accounted for by an appropriate modification of the chemical potential.

Recall that in the presence of a linear Zeeman effect, the basic properties of an atomic BEC can be understood within the so-called "condensate wave function" approximation [2]

defined wave function of macroscopic condensate), and Ez = i^bB the Zeeman energy (with ¡jl-q being the Bohr magneton).

Following Bogoliubov's recipe [36], let us consider small deviation of the condensate fraction from the ground state no (the number) by assuming that n(x) ~ ~ no + 5n(x) with 5n(x) <C no- Treating, as usually, no and 5n(x) independently, we obtain from Eq. (3) that in the presence of the linear Zeeman effect gno = Ez (meaning that Ez is playing a role of the chemical potential [37]) and, as a result, the BEC favors the following energy minimum:

Thus, we come to the conclusion that at low magnetic fields (where the linear Zeeman effect is valid), in accordance with the available experimental results [37], there is no any tangible change of the BEC properties (including g modification). On the other hand, there is a clear-cut experimental evidence [38, 39] in favor of the so-called Breit-Rabi nonlinear (quadratic) HF-mediated Zeeman effect [40] in BEC. We are going to demonstrate now how this nonlinear phenomenon (which is not a trivial generalization of the linear Zeeman effect) affects the BEC properties (including a feasible condensation temperature shift). Recall that in strong magnetic fields, the magnetic-field energy shift of the sublevel mp of an alkali-metal-atom ground state can be approximated (with a rather good accuracy) by the following expression [38]

and 5vhf is the so-called hyperfine splitting frequency between two ground states.

Now, by repeating the above-mentioned Bogoliubov's procedure, we obtain a rather nontrivial result for BEC modification. Namely, it can be easily verified that HF-mediated nonlinear Zeeman effect gives rise to the following two equivalent options for the energy minimization (based on the previously defined ground state with Ez = gno)- (a) ¿?nlz oc g2n2 or (b) Enlz oc Ezgno = (i^BB)gno. As a matter of fact, the choice between these two options is quite simple. We have to choose (b) simply because (a) introduces the second order interaction effects (oc g2) which are neglected in the initial Hamiltonian (3). As a result, the high-field nonlinear Zeeman effect produces the following modification of the local BEC energy:

Therefore, accounting for nonlinear Zeeman contribution will directly result in a renormalization of the high-field scattering length

Now, by inverting (2) and expanding the resulting B(a) dependence into the Taylor series (under the experimentally satisfied conditions <C a and A<Bo)

To find the change in 62 in the presence of the quadratic Zeeman effect one simply replaces the original (Zeeman-free) scattering length a in (1) with its renormalized form a* given by (9), which results in a nonlinear contribution to the shift of the critical temperature, specifically

Furthermore, by using (9), one can rewrite (11) in terms of the origina