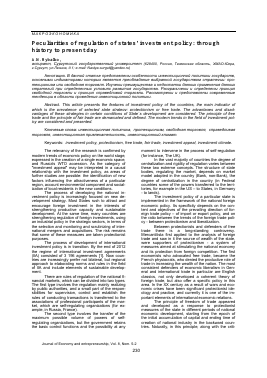 ﻿Peculiarities of regulation of states' investment policy: through history to present day

Abstract. This article presents the features of investment policy of the countries, the main indicator of which is the prevalence of selected state strategy: protectionism or free trade. The advantages and disadvantages of these strategies in certain conditions of State's development are considered. The principle of free trade and the principle of fair trade are demarcated and defined. The modern trends in the field of investment policy are considered and presented.

The relevancy of the research is confirmed by modern trends of economic policy on the world stage, expressed in the creation of a single economic space, and Russia's WTO accession. As the category of "investment appeal" may be interpreted in a causal relationship with the investment policy, as areas of further studies are possible: the identification of new factors influencing the attractiveness of a particular region, account environmental component and socialization of local residents in the new conditions.

The process of developing the national investment policy is increasingly focused on new development strategy. Most States rush to attract and encourage foreign investment in the interests of strengthening productive capacity and sustainable development. At the same time, many countries are strengthening regulation of foreign investments, using an industrial policy in the strategic sectors, in terms of the selection and monitoring and scrutinizing of international mergers and acquisitions. The risk remains that some of these measures are taken protectionist purposes.

There are rules of regulation of the national financial markets, which can be divided into two types. The first type involves the regulation mainly realizing by public authorities, and a small part of the responsibilities for supervision, control and establish the rules of conducting transactions is transferred to the associations of professional participants of the market, which are self-regulating organizations (for example, in Russia, France).

The second type involves the transfer of the maximum possible volume of powers of self-regulating organizations, but the government retains the basic control functions and the possibility at any

moment to intervene in the process of self-regulation (for instance, The UK).

In the vast majority of countries the degree of centralization and rigidity of regulation varies between these two extreme concepts. The structure of state bodies, regulating the market, depends on market model adopted in the country (Bank, non-Bank), the degree of centralization in the country (in Federal countries some of the powers transferred to the territories, for example in the US - to States, in Germany - to lands).

The investment policy of a particular state is implemented in the framework of the national foreign economic policy. Its specificity depends on the content and objectives of the prevailing direction of foreign trade policy - of import or export policy, and on the ratio between the trends of the foreign trade policy - between protectionism and liberalization.

Between protectionists and defenders of free trade there is a long-standing controversy. Mercantilista first applied to the analysis of foreign trade and saw in it the source of wealth of the state, were supporters of protectionism - a system of measures aimed at stimulating the national economy and its protection from foreign competition. The first economists who advocated free trade, became the French physiocrats, who denied the productive role of trade in increasing the wealth of the nation. The most consistent defenders of economic liberalism in General and international trade in particular are English classics, not only developed a coherent theory of foreign trade, but also offer a specific policy in this area. In the XX century as a result of wars and economic crises have been significant protectionist ideology and practice, and currently it is one of the important elements of international economic relations.

The principle of freedom of trade appeared and developed as a response to protectionist measures of the state in different periods of national economic development, starting from the epoch of the initial accumulation of capital and ending time of creation of national industry in the backward countries. Naturally, in this principle, along with the criti-

cism of protectionism provides evidence of the benefits of free trade.

Recommendations of supporters of "free trade" contributed to the economic growth and prosperity of many countries embarked on the path to an open economy.

The movement of Paradero originated in England in the last third of the XVIIIth C. and was connected with the events there the industrial revolution. The struggle of the English Paradero was directed against agricultural duties, supported by high prices for agricultural products, which has hampered the development of factory production, and also to the reduction of customs duties in mutual trade with other countries, which would increase the export of British goods abroad. Under the pressure of Paradero in 20's XIX century in England was realized the reform of the customs system, which have been abolished or significantly reduced customs duties for many goods. In the middle of the XIX century freetraders swept to victory in England, which greatly helped to make it to this time in the most developed country of the world. In the second half of the XIX century trends freetraders began to appear in the trade policy of France (1852 - 1870), Russia (1850 - 1860) and other countries [2].

In the XX century after the second world war, the removal of obstacles to free exchange contributed to an unprecedented economic and social development of most countries, and particularly those, which went towards the liberalization of foreign trade (creation of free trade areas, customs unions, regional markets). Conversely, countries that embarked on the path of autarky, protect its economy from the influence of foreign competition, had time to change course and spend more or less profound reform of the foreign economic relations aimed at the release of external trade from excessive state interference [3].

One should distinguish between the principle of "free trade" and the principle of "fair trade". According to the principle of free trade, public policy is the opposite of protectionism policy, i.e. market is opened to foreign goods, as well as foreign capital in the country. However, this policy and the uncontrolled influx of foreign goods, especially at a lower price, i.e. goods which compete with national products, retreating either quality or price, or, according to these two criteria simultaneously, which can certainly cause undermining of national production and the national economy as a whole. The policy of fair trade means that the state, through the measures of the customs regulation, establishing quotas, tariffs, and the introduction of legislative restrictions supports necessary for the country "balance" between the quantity of imported and produced production in the country. Through these measures, so-called "Golden mean" is achieved, and the market of the country does not suffer from import and overabundance of foreign goods. But this position is considered by the manufacturer, how a complex of these measures influences the market of goods and services of a particular country.

From the position of the buyer the opposite trend is observed: the limitation of the import of foreign goods, stimulating firms-manufacturers of a country to create products of appropriate quality at the best price, leads to strengthening of the monopolies and the lack of competition, and, as a result, the buyer has to buy the goods of a certain quality (sometimes second to foreign analogues) at higher prices. Protectionism in the long run undermines the

foundations of the national production, because it weakens the pressure of the global market, necessary for the development of entrepreneurial initiative. As a result, routine prevails than innovation and progress, reluctance to part with the acquired privileges and revenues. Also protectionism raises the risk of a "chain reaction", because after protection of certain industries from the adverse effects of the competitive environment of the market, soon there might be a necessity to protect others.

The benefits of free trade is quite versatile and are proved both theory and practice [2].

First, free trade can improve the welfare of trading Nations