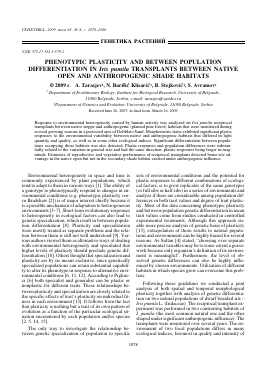 Response to environmental heterogeneity caused by human activity was analyzed on Iris pumila reciprocal transplants between native steppe and anthropogenic (planted pine forest) habitats that were monitored during several growing seasons in a protected area of Deliblato Sand. Morphometric traits exhibited significant plastic responses to the environmental variability between native and anthropogenic habitats that differed in light quantity and quality, as well as in some other ecological indices. Significant differentiation between populations occupying those habitats was also detected. Plastic responses and population differences were substantially related to the variation in general size and had the same direction, plastic responses being larger in magnitude. Estimates of reproductive and vegetative performance of reciprocal transplants detected home site advantage in the native open but not in the secondary shade habitat created under anthropogenic influence.

Environmental heterogeneity in space and time is commonly experienced by plant populations, which tend to adapt to them in various ways [1]. The ability of a genotype to phenotypically respond to changes in environmental conditions (e.g. phenotypic plasticity sensu Bradshaw [2]) is of major interest chiefly because it is a possible mechanism of adaptation to heterogeneous environments [3-7]. Short-term evolutionary responses to heterogeneity in ecological factors can also lead to genetic specialization, which result in between population differentiation [8]. Plasticity and specialization were mostly treated as separate problems and the relation between them is still not well understood [9]. Various authors viewed them as alternative ways of dealing with environmental heterogeneity and speculated that higher levels of plasticity should preclude genetic differentiation [10]. Others thought that specialization and plasticity are by no means exclusive, since genetically specialized populations can retain substantial capability to alter its phenotype in response to alternative environmental conditions [6, 11, 12]. According to Pigliuc-ci [6] both specialist and generalist can be plastic or nonplastic for different traits. These relationships between plasticity and specialization are closely related to the specific effects of trait's plasticity on individual fitness in each environment [13]. It follows from the fact that plasticity is nothing but a trait of its own pattern of evolution as a function of the particular ecological situation encountered by each population and/or species [2, 5, 14, 15].

sets of environmental conditions and the potential for plastic responses to different combinations of ecological factors, is to grow replicates of the same genotypes (or full sibs or half sibs) in a series of environments and analyze if there are considerable among population differences in both trait values and degree of trait plasticity. Most of the data concerning phenotypic plasticity and between-population genetic differentiation in mean trait values come from studies conducted in controlled experimental treatments. Although this approach enable more precise analysis of genetic basis of plasticity [13], extrapolation of those results to natural populations and environments can be highly biased for several reasons. As Sultan [4] stated, "choosing over separate environmental variables may be to some extent a guesswork because only organism's definition of its environment is meaningful". Furthermore, the level of observed genetic differences can also be highly influenced by chosen environments. Utilization of different habitats in which species grow can overcome this problem.

Following those guidelines we conducted a joint analysis of both spatial and temporal morphological plasticity together with analysis of genetic differentiation on two natural populations of dwarf bearded iris -Iris pumila L. (Iridaceae). The reciprocal transplant experiment was performed in two contrasting habitats of I. pumila (the most common natural one and the other shaped under significant anthropogenic influence). The transplants were monitored over several years. The environment of two focal populations differs in many ecological indices, foremost in quality and intensity of

light. First one is open habitat with plants exposed to direct sunlight, while the second is shaded habitat (forest) created under anthropogenic influence (details in Materials and Methods). It was hypothesized that populations adapted to more heterogeneous (open) environments should be more plastic in relevant characters (i.e. responding to light alteration) than populations in shaded environment [16].

I. pumila is a very suitable object for studies of spatial and temporal phenotypic plasticity as well as between population differentiations. It can reproduce vegetatively and the presence of rhizomes enables easy replication of the chosen clones. Due to their perennity clones of I. pumila can be studied for many years. Moreover, flower color polymorphism enables detection of genetically distinct clones even on very small distances [17].

This study was conducted in Deliblato Sand, a protected sandy area 40 km NE from Belgrade, Serbia (44°48'N, 20°58'E), on two I. pumila populations. The first population inhabits the Hillock site, an open habitat with sand-steppe type of vegetation. During the flowering time of I. pumila (usually mid-April, - for between year variation in flowering phenology see Tarasjev [18]) in sand-steppe habitat, radiation intensity was 666.1 ^mol m-2 s-1 and red/far red ratio (R/FR) was 1.16 estimated with LiCor 1000 (D) datalogger and Li190SA and Skye SKR110 sensors. The second population was taken from the Woodland site occupied by a planted forest of Pinus nigra at least 50 years old. On this site, clones of I. pumila grow in the shade (radiation intensity of 170.9 ^mol m-2 s-1 and R/FR ratio of 0.96). The Woodland site therefore represents the most common habitat created under anthropogenic influence. Open habitats with a sand-steppe type of vegetation and shaded habitats (forests) in Deliblato Sand differ greatly not only in the amount and quality of available light but also in other ecological indices (soil moisture, chemical reaction of the soil, nutrient content, and temperature - Kojic et al. [19]). The Hillock and the Woodland sites are located in the northwestern part of Deliblato Sand and the distance between them is approximately 5 km (estimated by GPS Personal Navigator eTrex Vista™ , Garmin Ltd.).

During the 1991 flowering season, 30 genetically distinct clones were chosen in each population. Clones

were identified on the basis of flower color. Four samples (each consisting of two connected ramets were taken from each clone. Two samples (replicates) were separately replanted on an experimental plot within the same habitat, and the other two samples were transplanted to similar a experimental plot in the other habitat (reciprocal transplantation). That lead to 120 plants in each experimental plot (2 populations with 30 genotypes each, each genotype having two replicas). Plant positions within each experimental plot (20 x 6 plants) were randomized. The morphometric data were taken during 1992, 1993 and 1994 flowering seasons on up to two flowering ramets from each of the four samples from a genet (two at Hillock and two in Woodland). All measurements on vegetative and floral (Fig. 1) parts were made to the nearest millimeter using fresh material, with the exception of floral and vegetative weights, which were taken with the precision of 0.001 g using oven-dried material. Morphometric data were transformed to natural logarithm as the appropriate transformation determined by the method given by Box et al. [20]. Prior to that, flower and vegetative weights (FLW and VW) were transformed by the cubic root in order to correct for dimensionality [21]. All analyses were performed on replicate means. Traits were analyzed jointly by the multivariate analysis of variance (MANOVA) and separately by the partial hierarchical ANOVA's with Site, Year and Population as main fixed factors and Clone as random factor nested within populations [22]. The structure of performed tests is presented in Table 1. Since some clones failed to flower in every site/year combination, the Type IV Sums of squares were used. Since 22 traits were utilized in single analysis and the Type I statistical error can be inflated, the sequential Bonferroni test was applied. Canonical Discriminant Analysis - CDA on site/year/population combinations as the groups was performed in order to reveal magnitude and direction of differences between analyzed groups.

The experimental procedure utilized in this survey included flower ha