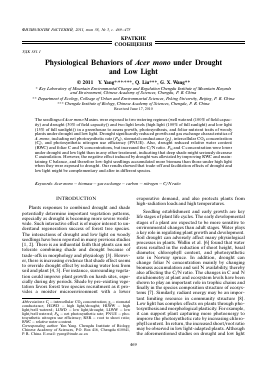 The seedlings of Acer mono Maxim. were exposed to two watering regimes (well watered (100% of field capacity) and drought (30% of field capacity)) and two light levels (high light (100% of full sunlight) and low light (15% of full sunlight)) in a greenhouse to assess growth, photosynthesis, and foliar nutrient traits of woody plants under drought and low light. Drought significantly reduced growth and gas exchange characteristics of A. mono, including net photosynthetic rate (PN), stomatal conductance (gs), intercellular CO2 concentration (Ci), and photosynthetic nitrogen use efficiency (PNUE). Also, drought reduced relative water content (RWC) and foliar C and N concentrations, but increased the C/N ratio. PN and C concentration were lower under drought and low light than in any other treatment, indicating that deep shade might seriously decrease C assimilation. However, the negative effect induced by drought was alleviated by improving RWC and maintaining C balance, and therefore low-light seedlings accumulated more biomass than those under high light when they were exposed to drought. Our results showed that trade-off and facilitation effects of drought and low light might be complementary and alter in different species.

Plants responses to combined drought and shade potentially determine important vegetation patterns, especially as drought is becoming more severe worldwide. Such interactive effect is of major interest to understand regeneration success of forest tree species. The interactions of drought and low light on woody seedlings have been reported in many previous studies [1, 2]. There is an influential faith that plants can not tolerate combining shade and drought because of trade-offs in morphology and physiology [3]. However, there is increasing evidence that shade effect seems to override drought effect by reducing water loss from soil and plant [4, 5]. For instance, surrounding vegetation could improve plant growth on harsh sites, especially during dry periods. Shade by pre-existing vegetation favors forest tree species recruitment as it provides a moister microenvironment with a lower

Seedling establishment and early growth are key life stages of plant life cycles. The early developmental stages of a plant are expected to be more sensitive to environmental changes than adult stages. Water plays a key role in regulating plant growth and development. Soil drought can adversely affect many physiological processes in plants. Wallin et al. [6] found that water stress resulted in the reduction of shoot height, basal diameter, chlorophyll content, and photosynthetic rate in Norway spruce. In addition, drought can change foliar N concentration mainly by changing biomass accumulation and soil N availability, thereby also affecting the C/N ratio. The changes in C and N stoichiometry at plant and ecosystem levels have been shown to play an important role in trophic chains and finally in the species composition structure of ecosystems [7]. Similarly, radiant energy may be an important limiting resource in community structure [8]. Low light has complex effects on plants through photosynthesis and morphological plasticity. For example, it can support plant capturing more photoenergy to improve the photosynthetic rate by increasing chlorophyll content. In return, the increased shoot/root ratio may be observed in low light-adapted plants. Although the aforementioned studies on drought and low light

effects have been extensively developed in these years [9], the combined effects of low light and drought on the content of mineral nutrients, especially on their stoichiometry, have been studied relatively little in broad-leaved plants.

Mono maple (Acer mono Maxim.) is a common species in reforestation processes in the southeast of the Qinghai-Tibetan Plateau of China. The present work was conducted in order to contribute to a better understanding of the short-term effect of drought on the response of plants to low light. With that purpose, a greenhouse experiment was carried out to test the changes in growth, photosynthetic capacities, and nutrients traits of A. mono seedlings subjected to drought under low or high light. We hypothesized that an interaction between drought and low light could occur since seedlings in the understory face to drought with climate change. Further, we aimed: (1) to determine whether and how C and N concentrations and stoichi-ometry of A. mono leaves are affected by combined drought and low light and (2) to estimate the potential effect of low light on seedlings subjected to drought.

Plant materials and experimental design. One-year-old and healthy Acer mono Maxim. seedlings of uniform size from local nursery (102°50'E, 31°50'N, 2800 m above sea level) in Miyaluo area, Aba Tibetan, and Qiang People Autonomous Prefecture, China, were selected. The plant height and stem basal diameter were 20.07 ± 0.87 cm and 2.05 ± 0.17 mm, respectively. Each seedling was transplanted to 4-l plastic pot filled with homogenized soil. The seedlings (one per pot) were grown in a naturally lit greenhouse under the semi-controlled environment (only shelter from rainfall) with a day temperature of 18—32°C and a night temperature of 10—16°C at local forest farm from April 20, 2007 to September 20, 2007.

The experimental layout was completely randomized with two fixed factors: two watering regimes (WW- well watered, 100% of field capacity; WD -drought, 30% of field capacity) and two light levels (HL - high light, 100% of full sunlight; LL - low light, 15% of full sunlight). The photon flux density was measured simultaneously at 50 cm above the ground under the 6 5-year Picea asperata plantation and its clear-cut sites at 10:00-10:30 a.m. for five days in June 2006, respectively. The mean irradiance under the 65-year plantation was nearly 15% of its clear-cut (15% of full sunlight). Thus 100% (the extreme light availability) and 15% (partial shade) of full sunlight were designed to simulate in situ irradiance in the clear-cut and understory of the sub-alpine conifer forest in Miyaluo area, respectively. Transpiration water loss was measured gravimetrically by weighing all pots and re-watering every two days artificially. The watering amount for each pot was determined according to the difference between the weight of a re-watered pot

and the weight of the pot 48 h later. In such a case, the soil water content in WW and WD treatments was always maintained at 38.49 and 11.55% during the experiment with HL and LL seedlings, respectively. A figure with the evolution of water availability showed that the water availability was the same for seedlings grown under low and high light (figure). All pots were rotated weekly to provide for random distribution in a greenhouse. For each of the four treatments, we used 4 replicates of 10 seedlings, i.e., a total of 40 seedlings per treatment and 160 seedlings in all. All foliage morphological, physiological, and biochemical measurements were undertaken on fully expanded non-senescent third or fourth leaf from the top of the plant.

Growth measurements. Six seedlings from each treatment were sampled randomly. Leaves, shoots, and roots were separated. Shoot height, basal diameter, and root length were measured. For dry weight determination, samples were oven-dried (65°C for 48 h) to a constant weight and then weighed. The root/shoot ratio (RSR) was then calculated.

Measurements of leaf carbon and nitrogen concentrations. In those oven-dried leaf samples that were collected from seedlings in four replicates, the total contents of nitrogen (N) and organic carbon (C) were analyzed by the Kjeldahl method and the rapid bichromate oxidation technique, respectively.

Leaf gas exchange and RWC. During the growth season, the net photosynthetic rate (PN, |mol CO2/(m2 s)), stomatal conductance to water vapor (gs, mmol/(m2 s)), and intercellular CO2 concentration (Ci, |imol/mol) were taken at about 10:00 to 12:00 a.m. on cloudless day with a portable photosynthesis system (LI-6400, "LI-COR", United States) in the open-circuit mode. Photosynthetic photon flux density and leaf temperature were maintained at 1000 ± 50 |mol/(m2 s) and 25 ± 1.5°C, respectively. Measurements were performed on the fully-opened leaf and terminal leaflets of the uppermost from two randomly selected seedlings per replication, total eight seedlings for each treatment. The ratio of PN to N content in the leaves was regarded as the photosynthetic nitrogen use efficiency (PNUE).

Leaf relative water content (RWC) was investigated as followed: 0.2 g of leaves from the first whirl of branches was chosen, cleaned, and then their fresh weight (FW) was