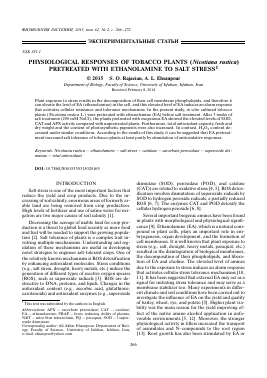 Plant exposure to stress results in the decomposition of their cell membrane phospholipids, and therefore it can elevate the level of EA (ethanolamine) in the cell, and this elevated level of EA induces an alarm response that activates cellular resistance and tolerance mechanisms. In the present study, in vitro cultured tobacco plants (Nicotiana rustica L.) were pretreated with ethanolamine (EA) before salt treatment. After 3 weeks of salt treatment (200 mM NaCl), the plants pretreated with exogenous EA showed the elevated levels of SOD, CAT and APX activity compared with unpretreated plants. Furthermore, total antioxidant capacity, fresh and dry weight and the content of photosynthetic pigments were also increased. In contrast, H2O2 content decreased under similar conditions. According to the results of this study, it can be suggested that EA pretreat-ment increased salt tolerance of tobacco plants at least partly by stimulation of antioxidative responses.

Salt stress is one of the most important factors that reduce the yield and crop products. Due to the increasing of soil salinity, enormous areas of formerly arable land are being removed from crop production. High levels of fertilizer and use of saline water for irrigation are two major causes of soil salinity [1].

Decreasing the acreage of usable land for crop production is a threat to global food security as more food and fuel will be needed to support the growing population [2]. Salt tolerance of plants is a complex trait involving multiple mechanisms. Understanding and regulation of these mechanisms are useful in developing novel strategies to engineer salt-tolerant crops. One of the relatively known mechanisms is ROS detoxification by enhancing antioxidant molecules. Stress conditions (e.g., salt stress, drought, heavy metals, etc.) induce the generation of different types of reactive oxygen species (ROS), such as superoxide radicals [3]. ROS are destructive to DNA, proteins, and lipids. Changes in the antioxidant content (e.g., ascorbic acid, glutathione, carotenoids) and antioxidant enzymes (e.g., superoxide

Several important biogenic amines have been found in plants with morphological and physiological significance [9]. Ethanolamine (EA), which is a natural compound in plant cells, plays an important role in embryogenesis, organ development, and the formation of cell membranes. It is well known that plant exposure to stress (e.g., salt, drought, heavy metals, paraquat, etc.) resulted in the disintegration of biological membranes, the decomposition of their phospholipids, and liberation of EA and choline. The elevated level of amines due to the exposure to stress induces an alarm response that activates cellular stress tolerance mechanisms [10, 11]. It has been suggested that external EA may act as a signal for initiating stress tolerance and may serve as a membrane stabilizer too. Many experiments in different climate and soil conditions have been carried out to investigate the influence of EA on the yield and quality of barley, wheat, rye, and potato [5]. Higher plant viability was the main reason for the yield improving effect of the native amino alcohol application in unfavorable environments [5, 12]. Moreover, the stronger physiological activity in tillers increased the transport of assimilates and N-compounds to the root region [13]. Root growth has also been stimulated by EA or

choline [14]. The effects of EA pretreatment on Zea mays under oxidative stress of paraquat (PQ) has also been reported [15]. Since the mechanism of EA action in plants has not been fully known, the present study was aimed to understand whether EA pretreatment can induce antioxidative defense against salt stress in tobacco as a model plant.

Plant material. Four-week-old tobacco plants (Nic-otiana rustica L.) were transferred to MS medium [16] supplemented with 0, 70, 130, 270, and 530 |M of EA as pretreatment; cultures were then kept in the growth chamber (16 h light/8 h dark) at 25°C. After two days plants were transferred for three weeks to MS medium with 200 mM NaCl or without NaCl as control. Preliminary experiments showed that 200 mM NaCl induced sever stress, but it was not destructive for N. rusrtica plants. After three weeks of salt treatment, plants were harvested and fresh and dry weights, chlorophyll, caro-tenoids, H2O2 contents, and total antioxidant, ascor-bate peroxidase (APX), CAT, and SOD activities were measured in the leaves. In each experiment at least five replicates were used per treatment.

Determination of chlorophyll and carotenoid content. To measure the photosynthetic pigments, plant material (300 mg) was ground in chilled 80% acetone in the dark. After centrifugation at 10000 g for 10 min at 4°C, the absorbance of the supernatant was measured at 470, 645, and 663 nm based on Lichtenthaler calculations [17].

Determination of total antioxidant capacity. Leaves (1 g) were cut into small pieces and homogenized with a cool mortar and pestle using quartz sand and 9 mL of cool 0.1 M phosphate buffer (pH 7.6, containing 0.1 mM EDTA). This mixture was filtered through a filter paper and centrifuged at 23 000 g for 10 min. The supernatant was used for the determination of total antioxidant activity by ferric reducing antioxidant power (FRAP) method. At low pH, when a ferric -tripyridyltriazine (FeIII-TPTZ) complex is reduced to ferrous (Fen) form, an intense blue color with an absorption maximum at 593 nm develops [18]. FRAP working solution contains 25 mL of acetate buffer (300 mM, pH 3.6), 2.5 mL of TPTZ solution (10 mM 2,4, 6-tripyridyl-s-triazine (TPTZ) in 40 mM HCl) and 2.5 mL of FeCl3 (20 mM) solution. The working solution always was freshly prepared. Aqueous solution of known Fe (II) concentration was used for calibration (in a range of 100—1000 |M). Sample included FRAP reagent — 1.5 mL and plant extract — 50 |L, and was monitored up to 5 min at 593 nm, 1 cm lights path and 25°C. Calculation was carried out using the calibration curve [19].

Determination of H2O2 concentration. Samples (leaves) were homogenized in 0.1% w/v TCA on ice.

The homogenate was centrifuged at 15000 g for 15 min at 4°C. From each supernatant, 0.5 mL was added to 0.5 mL of 10 mM phosphate buffer (pH 7.0) and 1.0 mL of 1 M KI and mixed gently. Absorbance of probes was measured for 1 min at 390 nm. H2O2 was quantified taking into account a calibration curve using solutions with known H2O2 concentrations. Results were expressed as |mol H2O2/g fr wt. The blank probe consisted of 0.1% TCA in the absence of leaf extracts [20].

SOD activity. The activity of SOD was assayed by measuring its ability to inhibit the photochemical reduction of nitro blue tetrazolium according to the method ofBeauchamp and Fridovich [22]. 3 mL of reaction mixture contained 40 mM phosphate buffer (pH 7.8), 13 mM methionine, 75 |M nitro blue tetra-zolium, 2 |M riboflavin, 0.1 mM EDTA, and a suitable aliquot of the enzyme extract. Riboflavin was added last. The test tubes were shaken and placed at 30 cm below light source (15 W fluorescent lamp). The reaction was started by switching on the light, and after 30 min the reaction was stopped by switching off the light. A tube containing protein and kept in darkness served as a blank, while the control tube was without the enzyme and kept in the light. The absorbance of the solution was measured at 560 nm. The activity of SOD is the measure of NBT reduction in light without protein minus NBT reduction with protein. One unit of activity is the amount of protein required to inhibit 50% of initial reduction of NBT under light.