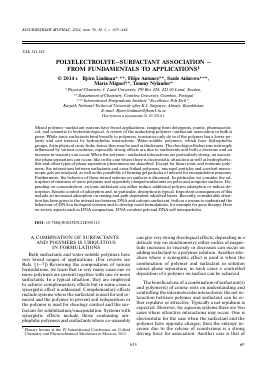 POLYELECTROLYTE—SURFACTANT ASSOCIATION -FROM FUNDAMENTALS TO APPLICATIONS1

Mixed polymer—surfactant systems have broad applications, ranging from detergents, paints, pharmaceutical, and cosmetic to biotechnological. A review of the underlying polymer—surfactant association in bulk is given. While ionic surfactants bind broadly to polymers, nonionics only do so if the polymer has a lower polarity and can interact by hydrophobic interactions. Water-soluble polymers, which have hydrophobic groups, form physical cross-links, hence they may be used as thickeners. The rheological behaviour is strongly influenced by various cosolutes; especially strong effects are due to surfactants and both a decrease and an increase in viscosity can occur. When the polymer—surfactant interactions are particularly strong, an associative phase separation can occur, like in the case where there is electrostatic attraction as well as hydrophobic; this and other types of phase separation phenomena are described. Except for linear ionic and nonionic polymers, the interactions between surfactants and cross-linked polymers, microgel particles and covalent macroscopic gels are analyzed, as well as the possibility of forming gel particles of interest for encapsulation purposes. Furthermore, the behavior of these mixed systems on surfaces is discussed. In particular, we consider the adsorption of mixtures of ionic polymers and oppositely charged surfactants on polar and nonpolar surfaces. Depending on concentration, an ionic surfactant can either induce additional polyion adsorption or induce desorption. Kinetic control of adsorption and, in particular, desorption is typical. Important consequences of this include an increased adsorption on rinsing and path dependent adsorbed layers. Recently, considerable attention has been given to the interaction between DNA and cationic surfactant, both as a means to understand the behaviour of DNA in biological systems and to develop novel formulations, for example for gene therapy. Here we review aspects such as DNA compaction, DNA covalent gels and DNA soft nanoparticles.

A COMBINATION OF SURFACTANTS AND POLYMERS IS UBIQUITOUS IN FORMULATIONS

Both surfactants and water-soluble polymers have very broad ranges of applications. (For reviews see Refs. [1—7]) Reviewing the compositions of various formulations, we learn that in very many cases one or more polymers are present together with one or more surfactants. In a typical situation, they are employed to achieve complementary effects but in some cases a synergistic effect is addressed. Complementary effects include systems where the surfactant is used for soil removal and the polymer to prevent soil redeposition or the polymer is used for rheology control and the surfactant for solubilisation/encapsulation. Systems with synergistic effects include those containing am-phiphilic polymers and surfactants where co-assembly

1 Plenary lecture at the IV International Conference on Colloid Chemistry and Physicochemical Mechanics in Moscow, 2013.

can give very strong rheological effects; depending in a delicate way on stoichiometry either orders of magnitude increases in viscosity or decreases can occur on adding surfactant to a polymer solution. Another situation where a synergistic effect is used is when the combination of polymer and surfactant in solution causes phase separation; in such cases a controlled deposition of a polymer on surface can be achieved.

The beneficial use of a combination of surfactant(s) and polymer(s) of course rests on understanding and controlling the intermolecular interactions; the net interaction between polymer and surfactant can be either repulsive or attractive. Typically a net repulsion is expected. However, for aqueous systems there are two cases where attractive interactions may occur. One is electrostatic for the case when the surfactant and the polymer have opposite charges; then the entropy increase due to the release of counterions is a strong driving force for association. Another case is that of

Fig. 1. A mixture of an ionic surfactant and an oppositely charged polyelectrolyte typically gives an associative phase separation, as here exemplified by tetradecyltrimethyl ammonium bromide and sodium hyaluronate. (From Ref. 15).

hydrophobic interactions, where there will be strong attractive interactions for amphiphilic polymers, for example for hydrophobically modified water-soluble polymers.

For polymers the translational entropy of mixing is small leading to limited solubility, as well as immisci-bility effects in mixed solutions. Surfactants generally occur in solution in the form of self-assemblies with large aggregation numbers and therefore surfactant solutions are also characterized by low translational entropy. Therefore, in the absence of an attractive polymer— surfactant interaction, mixed solutions are expected to have the tendency to segregative phase separation. This is, for example, often found in mixed solutions of a non-ionic polymer and a non-ionic surfactant and for a mixture of two similarly charge co-solutes.

An attractive interaction can lead to complex formation and, if strong enough, to associative phase separation. The association between ionic surfactants and oppositely charged polymers is strong and the critical association concentration (CAC) is low and decreases considerably with polymer charge density. Phase separation phenomena are common and are, for example, the basis for the deposition of conditioning polymers in hair-care formulations. In this treatise we will be concerned mainly with the situation of phase separation. We will review our early studies as well as present some recent results.

A mixture of two oppositely charged polyelectro-lytes shows a strongly associative behaviour, as demonstrated by a strong tendency to phase separation. A mixture of a polyelectrolyte and an oppositely charged surfactant will also associate strongly. This is exemplified by a lowering of the CMC by orders of magnitude for long-chain surfactants [8—14]. In addition, phase separation takes place in a broad range of concentrations [15—21]. For example, if an ionic surfactant is progressively added to a solution of an oppositely charged polymer, turbidity is encountered for certain concentrations. As surfactant starts to bind to the polymer, at the CAC, neutral insoluble complexes come out of solution. In many cases there is a redissolution, as seen from the solutions becoming clear at higher surfactant concentrations. This will occur if the polymer has certain hydrophobicity and thus can bind the surfactant above charge stoichiometry; when the complexes become increasingly charged, their solubility increases [22]. This redissolution and charge reversal will not occur for entirely hydrophilic polymers.

The strong associative phase separation of such systems can be characterized in the conventional phase diagram for three-component systems as exemplified in Fig. 1. As shown, an aqueous mixture of a polyelec-trolyte and an oppositely charged surfactant phase separates into one dilute phase and one, typically highly viscous, phase, concentrated in both polymer and surfactant.

The extent of phase separation in the system of Fig. 1 increases strongly with the surfactant alkyl chain length and with the polymer molecular weight. On addition of an electrolyte, the phase separation is reduced and then eliminated, but at higher electrolyte content there is a phase separation again. However, as we can see in Fig. 2, this is of a different nature. This behaviour, which is very similar to what is observed for mixtures of two oppositely charged polymers, can best be understood from a combination of polymer incompatibility and electrostatic effects. We note that the concentration of counterions is very high and, therefore, unlike for the non-ionic polymers, phase separation with a polyelectrolyte in one phase leads to confinement of the counterions and a very significant entropy loss. At high electrolyte concentrations, this entropy contribution is eliminated and the phase separation will be similar to that of uncharged polymer systems. In the case of Fig. 2, we have an intrinsically segregating system, as can be seen from the phase diagram at high electrolyte concentrations.

The associative phase separation, occurring for mixtures of both anionic and cationic polymers with oppositely charged surfactants, at low salt contents is thus understood from the entropy of the counterion distribution. The highly charged micelles and poly-

electrolyte molecules are enriched with counterions at their surface due to the Coulombic attraction. On association, counterions of both cosolutes are transferred into the bulk with a concomitant entropy gain; therefore, there is a strong tendency to associative phase separation in the absence of added salt.

When the surfactant and the polymer have similar charges, the entropic loss is absent and