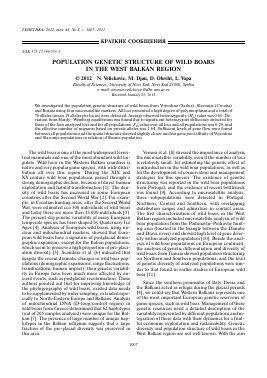 We investigated the population genetic structure of wild boars from Vojvodina (Serbia), Slavonija (Croatia) and Bosnia using four microsatellite markers. All loci presented a high degree of polymorphism and a total of 76 alleles (mean 19 alleles per locus) were detected. Average observed heterozygosity (Ho) value was 0.60. Deviation from Hardy—Weinberg equilibrium was found due to significant heterozygote deficiency detected for three of the four analyzed loci and for all populations. FIS value over all loci and all populations was 0.29, and the effective number of migrants based on private alleles was 1.64. Sufficient levels of gene flow were found between all populations and the spatial structure showed slightly closer nuclear gene pool affinity of Vojvodina and Slavonija populations in relation of Bosnia population.

The wild boar is one of the most widespread terrestrial mammals and one of the most abundant wild ungulate. Wild boar in the Western Balkan countries is native and very popular game species, with wide distribution all over this region. During the XIX and XX century wild boar populations passed through a strong demographic decline, because of direct human exploitation and habitat transformation [1]. The density of wild boars has increased in some European countries after the Second World War [2]. For example, in Croatian hunting areas, after the Second World War, were estimated cca 300 individuals of wild boars and today there are more then 15.000 individuals [3]. The present-day genetic variability of many European temperate species has been shaped by Quaternary Ice Ages [4]. Analyses of European wild boars, using nuclear and mitochondrial markers, showed that European wild boars have a signature of postglacial demographic expansion, except for the Italian populations, which seem to preserve a high proportion of pre-glaciation diversity [5]. Scandura et al. [6] indicated that despite the recent dramatic changes in wild boar populations (demographic expansions, range fluctuations, translocations, human impact), their genetic variability in Europe have been much more affected by ancient events, such as postglacial recolonisation. These authors pointed out that for improving knowledge of the phylogeography of wild boars, existed data needs to be supplemented by wider sampling, extended especially to North-Eastern Europe and Balkans. Analysis of mitochondrial DNA (D-loop/control region) in wild boars from Greece determined that 62 haplotypes (out of205 samples analysed) were unique for the Balkan [7]. The presence of large number of unique hap-lotypes in the Balkan refugium suggests that a large fraction of the pre-glacial diversity was preserved in this area.

Since the southern peninsulas of Italy, Iberia and the Balkans acted as refugia during the glacial periods [4], we could say that Western Balkans represents one of the most important European genetic reservoirs of game species, such as wild boar. Management of these genetic resources need a detailed description of the variability represented by different populations and integration of these data with their dynamics for a fruitful economic exploitation and sustainability. Genetic diversity and population structure of wild boars in the West Balkan region are not well known. With the aim

In order to estimate population genetic structure of wild boars in the West Balkan region, number of alleles per locus, allele frequencies, expected and observed heterozygosity, inbreeding coefficients (FIS), and genetic differentiation between groups (FST) were calculated for all loci, based on overall set of samples, using GENTIX version 4.05 [14]. The data were tested for linkage disequilibrium using an exact test based on Markov chain method and the exact Hardy-Weinberg equilibrium test was carried out using GENEPOP version 3.4 [15]. The Boniferroni correction was used to eliminate significance by chance [16]. GENEPOP version 3.4 was also used to calculate effective number of migrants based on private alleles and genetic distance of analyzed populations. Obtained matrix of genetic distance was used in PHYLIP version 3.66 [17] to construct a neighbor-joining tree. The validation of the previously defined groups was evaluated using factorial correspondence analysis in the program GE-NETIX version 4.05. ARLEQUIN 3.0 [18] was used to investigate the amount of partitioning of genetic variability and simple AMOVA was applied in the analysis of three populations defined on geographical criterion.

Amplification of four analysed microsatellite loci was successful in 92.5% to 95.5%. Statistical analysis included all four analysed loci since linkage disequilib-

rium test indicated independent segregation of loci. All loci presented a high degree of polymorphism and a total of 76 alleles were detected, with a mean of19 al-leles per locus (original data would be possible to obtain by request). The highest number of alleles per locus was found at S0068 (31), while the lowest number of 12 alleles was present at locus SW251 (Table 1). The highest number of alleles was found in the wild boar from Slavonija (Croatia), and the lowest in the Bosnia wild boar population. Deviation from Hardy-Wein-berg equilibrium was found due to significant heterozygote deficiency detected for three of the four analyzed loci and for all populations.

Overall inbreeding coefficients were positive, with an average FIS = 0.29. The effective number of migrants based on private alleles was 1.64. The spatial structure derived from statistical analyses of genetic data showed slightly closer nuclear gene pool affinity of Vojvodina and Slavonija populations in relation of Bosnia population, which are shown as independent branch (Fig. 1). Factorial correspondence analysis (FCA) was also performed in order to determine the degree of structuring populations. Samples were plotted in 3D diagram (Fig. 2), showing that Vojvodina (Serbia) and Slavonija (Croatia) are genetically closer, with admixture in contact areas. Bosnia samples show a more scattered distribution, and it is differenced from Vojvodina and Slavonija populations, as it was shown in neighbour-joining tree.