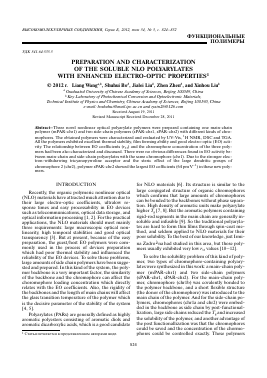 Abstract—Three novel nonlinear optical polyarylate polymers were prepared containing one main-chain polymer (mPAR-chr1) and two side-chain polymers (sPAR-chr1, sPAR-chr2) with different kinds of chro-mophores. The obtained polymers were characterized and evaluated by UV-Vis, XH NMR, DSC and TGA. All the polymers exhibited excellent thermal stability, film forming ability and good electro-optic (EO) activity. The relationship between EO coefficients (r33) and the chromophore concentration of the three polymers had been also characterized and discussed. There were no obvious differences found in EO activity between main-chain and side-chain polyarylates with the same chromophore (chr1). Due to the stronger electron-withdrawing tricyanopyrroline acceptor and the steric effect of the large dendritic groups of chromophore 2 (chr2), polymer sPAR-chr2 showed the largest EO cofficients (64 pm V-1) in these new polymers.

Recently, the organic polymeric nonlinear optical (NLO) materials have attracted much attention due to their large electro-optic coefficients, ultralow response times and easy processability in EO devices such as telecommunications, optical data storage, and optical information processing [1, 2]. For the practical applications, the NLO materials should meet mainly three requirements: large macroscopic optical non-linearity, high temporal stabilities and good optical transparency [3]. But at present, because of the easy preparation, the guest/host EO polymers were commonly used in the process of devices preparation which had poor thermal stability and influenced the reliability of the EO devices. To solve these problems, large amounts of side chain polymers have been suggested and prepared. In this kind of the system, the polymer backbone is a very important factor, the similarity of the backbone and the chromophore can affect the choromophore loading concentration which directly relates with the EO coefficients. Also, the rigidity of the backbones and the length of main chains will affect the glass transition temperature of the polymer which is the decisive parameter of the stability of the system [4, 5].

Polyarylates (PARs) are generally defined as highly aromatic polyesters consisting of aromatic diols and aromatic dicarboxylic acids, which is a good candidate

for NLO materials [6]. Its structure is similar to the large conjugated structure of organic chromophores which confirms that large amounts of chromophores can be bonded to the backbones without phase separation. High density of aromatic units make polyarylate higher Tg [7, 8]. But the aromatic polymers containing rigid-rod segments in the main chain are generally insoluble and infusible [9]. So the traditional polyarylates are hard to form thin films through spin-coat method, and seldom applied to NLO materials for their poor solubility. To the best of our knowledge, just Irmina Zadrozna had studied in this area, but those polymers usually exhibited very low ^3 values [10-12].

To solve the solubility problem of this kind of polymer, two types of chromophore-containing polyarylates were synthesized in this work: a main-chain polymer (mPAR-chrl) and two side-chain polymers (sPAR-chrl, sPAR-chr2). For the main-chain polymer, chromophore (chrlb) was covalently bonded to the polymer backbone, and a short flexible structure (the donor of the chromophore) was introduced to the main chain of the polymer. And for the side-chain polymers, chromophores (chrla and chr2) were embedded in the backbone as side chain by post-functional-lization, large side chains reduced the Tg and increased the solubility of the polymer, and another advantage of the post functionallization was that the chromophores could be saved and the concentration of the chormo-phores could be controlled exactly. These polymers

not only maintained the advantages of traditional po-lyarylates, such as good thermal and optical properties, but also improved the solubility and film-forming capability. It is noted that sPAR-chr2 afforded exceptionally high r33 values, up to 64 pm V-1 at 1315 nm. So it is reasonable to believe that these new kinds of chro-mophore-containing polyarylates can be a serial of promising organic electro-optic materials.

1H NMR spectra were measured on a AVANCE 400 (Bruker) spectrometer using tetramethylsilane (TMS; 5 = 0 ppm) as the internal standard. The Fourier transform infrared (FTIR) spectra were recorded on a Varian 3100 FTIR Excalibur Series. UV-Vis spectra were obtained using a HITACHI U-2001 spectrometer. The TGA and DSC curves were recorded with a TA-instrument Q50 and Q10 analyzers, respectively, with a heat rate of 10°C min-1 under nitrogen atmosphere. The thickness of the films was measured with an Ambios Technology XP-1 profilometer. The weight average molecular weight (Mw) of the polyarylates were measured by a GPC. Tricyanofuran (TCF) acceptor, tricyanopyrroline (TCP) acceptor and 3,5-bis(2-eth-ylhexyloxy) benzyl bromide were synthesized according to references [13-15], respectively.

Synthesis of the Chromophores

Chromophore la and 1b: The two chromophores were synthesized according to the reference [16].

Synthesis of the Polymers

sPAR: Polycondensation was carried out in an aqueous/organic two-phase system, using tetrabutyl ammonium bromide as the phase transfer catalyst [17-19]. Isophthaloyl dichloride (4.06 g, 20 mmol) in 50 ml of dichloroethane was added to 5.72 g (20 mmol) of diphenolicacid in 100 ml of aqueous NaOH solution (including 30 mmol NaOH) in the presence of 0.1 g of tetrabutyl ammonium bromide. The reaction was continued for 1 h at room tempreture, and then the pH of the solution was controlled to about 3 by 2 N hydrochloric acid. After that, the polymer was filtered, and washed by deionized water and acetone, then dried for 24 h at 50°C in vacuum.

sPAR-chr2: The process of the synthesis of sPAR-chr2 was the same as that of sPAR-chr1. Blue-green polyarylate branched with chromophore 2 was obtained. GPC: Mw 13200, Mw/Mn 2.26 (polystyrene cal-