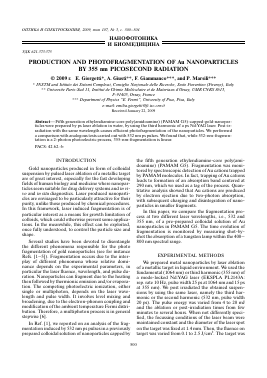 PRODUCTION AND PHOTOFRAGMENTATION OF Au NANOPARTICLES

Abstract—Fifth generation ethylendiamine-core poly(amidoamine) (PAMAM G5)-capped-gold-nanopar-ticles were prepared by ps laser ablation in water, by using the third harmonic of a ps Nd:YAG laser. Post-irradiation with the same wavelength causes efficient photofragmentation of the nanoparticles. We performed a comparison with analogous tests carried out with 532 nm ps pulses. We found that, while 532-nm-fragmen-tation is a 2-photon photoelectric process, 355-nm-fragmentation is linear.

Gold nanoparticles produced in form of colloidal suspension by pulsed laser ablation of a metallic target are of great interest, especially for the fast developing fields of human biology and medicine where nanoparticles seem suitable for drug delivery systems and in vivo and in situ diagnostics. Laser produced nanoparti-cles are envisaged to be particularly attractive for their purity, unlike those produced by chemical procedures. In this framework, laser induced fragmentation is of particular interest as a means for growth limitation of colloids, which could otherwise prevent some applications. In the meanwhile, this effect can be exploited, once fully understood, to control the particle size and shape.

Several studies have been devoted to disentangle the different phenomena responsible for the photo fragmentation of gold nanoparticles (see for instance Refs. [1—5]). Fragmentation occurs due to the interplay of different phenomena whose relative dominance depends on the experimental parameters, in particular the laser fluence, wavelength, and pulse duration. Nanoparticles can fragment due to the heating then followed by thermionic emission and/or evaporation. The competing photoelectric ionization, either single or multiphoton, depends on the laser wavelength and pulse width. It involves level mixing and broadening, due to the electron-phonon coupling and modification of the ambient temperature Fermi distribution. Therefore, a multiphoton process is in general stepwise [6].

In Ref. [1], we reported on an analysis of the fragmentation induced by 532 nm ps pulses in a previously prepared colloidal solution of nanoparticles capped by

the fifth generation ethylendiamine-core poly(ami-doamine) (PAMAM G5). Fragmentation was monitored by spectroscopic detection ofAu cations trapped by PAMAM molecules. In fact, trapping of Au cations leads to formation of an absorption band centered at 290 nm, which we used as a tag of the process. Quantitative analysis showed that Au cations are produced by electron ejection due to two-photon absorption, with subsequent charging and disintegration of nanoparticles in smaller fragments.

In this paper, we compare the fragmentation process at two different laser wavelengths, i.e., 532 and 355 nm, of a pre-prepared colloidal solution of Au nanoparticles in PAMAM G5. The time evolution of fragmentation is monitored by measuring shot-by-shot the absorption of a tungsten lamp within the 400— 800 nm spectral range.

We prepared metal nanoparticles by laser ablation of a metallic target in liquid environment. We used the fundamental (1064 nm) or third harmonic (355 nm) of a mode-locked Nd:YAG laser (EKSPLA PL2143A: rep. rate 10 Hz, pulse width 25 ps at 1064 nm and 15 ps at 355 nm). We post irradiated the obtained suspensions by using the same laser, namely the third harmonic or the second harmonic (532 nm, pulse width 20 ps). The pulse energy was varied from 4 to 20 mJ and the ablation or post-irradiation times from few minutes to several hours. When not differently specified, the focussing conditions of the laser beam were maintained constant and the diameter of the laser spot on the target was fixed at 1.4 mm. Then, the fluence on target was varied from 0.1 to 2.5 J/cm2. The target was

Fig. 1. TEM image and statistical distribution of dimensions of a suspension of AuNPs obtained with 355 nm, 5 mJ, 16 min, 0.1 J/cm2 fluence on target.

placed in a 1 cm x 1 cm quartz cuvette and was kept 2 cm in front of the focal plane of the laser beam. We used 2 mL of stabilizing solution for ablation and 1 or 2 mL for post-irradiation tests.

The ablation process and the subsequent photo -fragmentation of nanoparticles were monitored by measuring on-line the visible spectra with an Ocean Optics fiber spectrophotometer and a tungsten lamp and the one-wavelength transmission of the suspensions with an Ar laser at 514.5 nm. The sampling beams were perpendicular to the ps laser beam and crossed the quartz cuvette 0.5 cm above the bottom of the cell.

We prepared AuNPs suspensions in solutions of PAMAM G5 in water. The solutions were 3.8 mM referred to superficial amino groups and were obtained by dilution of 22.2% aqueous solution of PAMAM G5 from Dendritech® with ultrapure water (18.2 MQ cm, 25°C). According to tabulated values provided by the producer, PAMAM G5 is a monodisperse compound, having a molecular diameter of 5.4 nm. The gold target was purchased from Goodfellow.

We recorded UV-Vis spectra one day after the preparation of the suspensions with a double beam spectrophotometer (Perkin Elmer mod. Lambda 19).

The particle mean diameter and dispersivity were determined by TEM analysis. TEM samples were obtained by dipping copper grids in the suspensions and the images were recorded with a HRTEM JEOL2010, 200KV.

ABLATION AND PHOTOFRAGMENTATION WITH 355 nm LIGHT

We prepared AuNPs by ablating the gold target with 355 nm pulses. The formation of AuNPs after 16 min ablation with 5 mJ per pulse is demonstrated by the light pink colour of the resulting suspension and by TEM analysis, as reported in Fig. 1. Small AuNPs are clearly visible. They are mostly spherical and with average diameter of 2.7 nm. The statistical distribution is strongly asymmetrical, with ct+ and ct_ equal to 1.4 nm and 0.4 nm, respectively. The average particle diameter is substantially lower than that obtained by ablation with 1064 and 532 nm and in the same conditions [1]. In particular, most nanoparticles are smaller than 5 nm and no particle having diameter larger than 8 nm is visible in the TEM images. After irradiation with 355 nm, 5 mJ, 16 min, but without target, the suspension of Fig. 1 became completely transparent and TEM detection of AuNPs was impossible. This suggests that, analogously to the 532 nm wavelength, also the third harmonic of the Nd:YAG causes photofrag-metation ofAuNPs. Even with a small value of the energy per pulse (5 mJ), the process is very efficient and reduces the particle diameter down to values below ~1 nm, consitent with the observed thorough bleaching of the plasmon band.

This point is further elucidated by the UV-Vis spectra reported in Fig. 2a. The continuous line refers to the suspension of Fig. 1 and shows a plasmon band around 520 nm: its poor visibility is related to the small

particle diameter [6]. Instead, an intense band in the UV is clearly visible. Post irradiation with 355 nm, 5 mJ and 16 min led to a complete bleaching of the plasmon and to an increase of the UV band (dashed line in Fig. 2a). In the case of 532 nm ablation, we observed an analogous band peaked at 290 nm, which we attributed to a ligand-to-metal-charge-transfer (LMCT) among PAMAM G5 and Au cations generated by photofragmentation of existing nanoparticles [1]. Figure 2b shows that, contrary to the behaviour observed with 532 nm irradiation, the UV band results from the overlap of two contributions: one around 280 nm which, according to [3], can be attributed to some photodegradation of PAMAM G5 and one around 300 nm, that can be still attributed to a LMCT.

Indeed, as observed in [1], the LMCT band shifts from 290 nm towards the red with increasing concentration of Au cations. The existence of some photodegradation of PAMAM G5 under UV irradiation is confirmed by the dotted spectrum in Fig. 2a, corresponding to a PAMAM G5 solution irradiated with 355 nm, 5 mJ, 16 min without target, and by the inset of Fig. 2a, which compares the spectrum of a 3.8 mM PAMAM G5/water solution (continous line), and of the same solution after irradiation with 532 nm, 5 mJ, 16 min (dashed line) or with 355 nm, 5 mJ, 16 min (dotted line). While the spectral changes are negligible under green light irradiation, UV light causes a considerable increase of the UV absorption of PAMAM and the growth of an intense band centered at 285 nm.

We studied the dependence of the 355 nm-photo-fragmentation process on pulse energy. When very concentrated suspensions of AuNPs in PAMAM G5 are used, the bleaching proceeds layer by layer, due to the strong absor