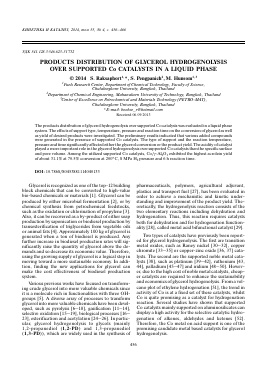 Glycerol is recognized as one of the top-12 building block chemicals that can be converted to high-value bio-based chemicals or materials [1]. Glycerol can be produced by either microbial fermentation [2], or by chemical synthesis from petrochemical feedstocks, such as the oxidation or chlorination of propylene [3]. Also, it can be recovered as a by-product of either soap production by saponication or biodiesel production by transesterification of triglycerides from vegetable oils or animal fats [4]. Approximately 100 kg of glycerol is generated when a ton of biodiesel is produced. Any further increase in biodiesel production rates will significantly raise the quantity of glycerol above the demands and so decrease its economic value. Therefore, using the growing supply of glycerol is a logical step in moving toward a more sustainable economy. In addition, finding the new applications for glycerol can make the cost effectiveness of biodiesel production system.

Various previous works have focused on transforming crude glycerol into more valuable chemicals since it is a molecule rich in functionalities with three OH-groups [5]. A diverse array of processes to transform glycerol into more valuable chemicals have been developed, such as pyrolysis [6—10], gasification [11—14], selective oxidation [15—19], biological processes [16— 23], esterification and acetylation [24—26]. In particular, glycerol hydrogenolysis to glycols (mainly 1,2-propanediol (1,2-PD) and 1,3-propanediol (1,3-PD)), which are widely used in the synthesis of

pharmaceuticals, polymers, agricultural adjuvant, plastics and transport fuel [27], has been evaluated in order to achieve a mechanistic and kinetic understanding and improvement of the product yield. Theoretically, the hydrogenolysis reaction consists of the two elementary reactions including dehydration and hydrogenation. Thus, this reaction requires catalysts both for dehydration and for hydrogenation functionality [28], called metal acid bifunctional catalyst [29].

Two types of catalysts have previously been reported for glycerol hydrogenolysis. The first are transition metal oxides, such as Raney nickel [30—32], copper chromite [33—35] or copper-zinc oxide [36, 37] catalysts. The second are the supported noble metal catalysts [38], such as platinum [39—42], ruthenium [43, 44], palladium [45-47] and iridium [48-50]. However, due to the high cost of noble metal catalysts, cheaper catalysts are required to enhance the sustainability and economics of glycerol hydrogenolysis. From a volcano plot of ethylene hydrogenation [51], the trend in activity of Co is at a fixed set of these catalysts, whilst Co is quite promising as a catalyst for hydrogenation reaction. Several studies have shown that supported Co catalysts mainly supported on aluminosilicates can display a high activity for the selective catalytic hydrogenation of alkenes, aldehydes and ketenes [52]. Therefore, the Co metal on acid support is one of the promising candidate metal based catalysts for glycerol hydrogenolysis.

In this study, the products distribution of glycerol hydrogenolysis to added compounds over supported Co catalysts in a liquid phase was explored. The influence of the catalyst morphology and acidity as well as the operating conditions on the glycerol conversion and product yield was investigated. The pathway of glycerol hydrogenolysis in the presence of supported Co catalysts was also proposed.

Supported Co catalysts were prepared by an incipient wetness impregnation method on the three different types of support including y-Al2O3 ("Sumitomo Chemical Co., Ltd."), HZSM-5 ("Zibo Xinhong Chemical Trade Co., Ltd.") and an as-prepared AlMCM-41 with a molar ratio of SiO2 : Al2O3 of 25 [53, 54], at an equal catalyst loading of 5 wt %. Prior to use, all supports were ground and sieved to pass 125- ^m sieve (No. 120). For the catalyst preparation stage, 4.034, 2.017 and 0.504 g of CoCl2 • 6H2O (Carlo Erba reagent) was dissolved in 10 mL de-ionized water and dropped slowly on the y-Al2O3, HZSM-5 and AlMCM-41 supports, respectively. The ready-to-use supported Co catalysts were obtained after drying at 110°C overnight and calcination at 400°C for 2 h. The specific surface area, pore volume and average pore diameter of the support or supported Co catalysts were measured by N2 adsorption—desorption on a surface area analyzer ("Quantachrome", Autosorb-1). The surface area was calculated from BET method and the pore size distribution was calculated by BJH analysis for Y-Al2O3 and AlMCM-41 and by NL-DFT method for HZSM-5. The phase structures of the catalysts were determined by X-ray diffraction (XRD) with a Bruker AXS D8 Advance X-Ray Diffractometer with Cu (k = 0.15406 nm). All catalysts were analyzed for

their microstructure and elemental compositions by scanning electron microscopy with energy dispersive X-ray analysis (SEM-EDX) on a JEOL JSM-5800 LV instrument. The acidities of these catalysts were estimated by NH3-temperature programmed desorption (NH3-TPD) on a BELCAT-M instrument.

Prior to evaluate the catalytic activity, the as-prepared supported catalysts were reduced under a H2 atmosphere at constant flow rate of 50 mL/min in a fixed-bed reactor at 350°C for 4 h [53]. Subsequential-ly, the activity of supported Co catalysts for glycerol hydrogenolysis was carried out in a 250 mL pressure reactor (PARR reactor) at different H2 pressures (4—8 MPa), reaction temperatures (120—200°C) and reaction times (1—10 h). In each reaction, 150 mg supported Co catalyst was mixed with 10 g glycerol solution (20 wt %, "Fisher Scientific") and purged with pure H2 several times at a constant flow rate of 50 mL/min to eliminate the residual air in the reactor. The reactor pressure was then increased to the required H2 pressure, heated to the desired reaction temperature and maintained at that condition for the given reaction period to allow the hydrogenation reaction of glycerol to proceed. After the reaction period, the pressure and temperature ofthe reactor were relieved slowly. The liquid product was analyzed by high performance liquid chromatograph (HPLC, Agilent 1100 Series) equipped with a Pinnacle II C-18 5 ^m (250 x 4.6 mm) column and refractive index detector. Products were confirmed by GC-mass spectrometry (GC-MS, "Agilent", GC 7890A, Mass 5975C) using a DB-5ms (30 m x 250 ^m x 0.25 ^m) column for products separation. The net glycerol conversion and the product yield of selected products were calculated on the basis of Eqs. (1) and (2), respectively:

Table 1. Textural parameters of the used supports and their corresponding supported Co catalysts at a nominal 5 wt % loading