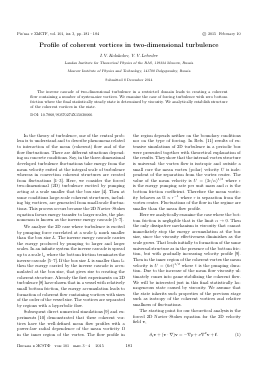 The inverse cascade of two-dimensional turbulence in a restricted domain leads to creating a coherent flow containing a number of system-size vortices. We examine the case of forcing turbulence with zero bottom friction where the final statistically steady state is determined by viscosity. We analytically establish structure of the coherent vortices in the state.

In the theory of turbulence, one of the central problem is to understand and to describe phenomena related to interaction of the mean (coherent) flow and of the flow fluctuations. There are different situations depending on concrete conditions. Say, in the three-dimensional developed turbulence fluctuations take energy from the mean velocity exited at the integral scale of turbulence whereas in convection coherent structures are created from fluctuations [1-3]. Here, we consider the forced two-dimensional (2D) turbulence excited by pumping acting at a scale smaller that the box size [4]. Then at some conditions large-scale coherent structures, including big vortices, are generated from small-scale fluctuations. This process occurs because the 2D Navier-Stokes equation favors energy transfer to larger scales, the phenomenon is known as the inverse energy cascade [5-7].

We analyze the 2D case where turbulence is excited by pumping force correlated at a scale lp much smaller than the box size L. The inverse energy cascade carries the energy produced by pumping to larger and larger scales. In an infinite system the inverse cascade is spread up to a scale la where the bottom friction terminates the inverse cascade [5-7]. If the box size L is smaller than la then the energy carried by the inverse cascade is accumulated at the box size, that gives rise to creating the coherent structure. Already the first experiments on 2D turbulence [8] have shown that in a vessel with relatively small bottom friction, the energy accumulation leads to formation of coherent flow containing vortices with sizes of the order of the vessel size. The vortices are separated by regions with a hyperbolic flow.

Subsequent direct numerical simulations [9] and experiments [10] demonstrated that these coherent vortices have the well-defined mean flow profiles with a power-law radial dependence of the mean vorticity Q in the inner region of the vortex. The flow profile in

the region depends neither on the boundary conditions nor on the type of forcing. In Refs. [11] results of extensive simulations of 2D turbulence in a periodic box were presented together with theoretical explanation of the results. They show that the internal vortex structure is universal: the vortex flow is isotropic and outside a small core the mean vortex (polar) velocity U is independent of the separation from the vortex center. The value of the mean velocity is U = (3e/a)1/2 where e is the energy pumping rate per unit mass and a is the bottom friction coefficient. Therefore the mean vorticity behaves as Q <x where r is separation from the vortex center. Fluctuations of the flow in the regime are smaller than the mean flow profile.

Here we analytically examine the case where the bottom friction is negligible that is the limit a —> 0. Then the only dissipative mechanism is viscosity that cannot immediately stop the energy accumulation at the box size, since the viscosity effectiveness diminishes as the scale grows. That leads initially to formation of the same universal structure as in the presence of the bottom friction, but with gradually increasing velocity profile [9]. Then in the inner region of the coherent vortex the mean velocity is U = {Qet)1/2 where t is the pumping duration. Due to the increase of the mean flow viscosity ultimately comes into game stabilizing the coherent flow. We will be interested just in this final statistically homogeneous state caused by viscosity. We assume that the state inherits such properties of the previous stage such as isotropy of the coherent vortices and relative smallness of fluctuations.

The starting point for our theoretical analysis is the forced 2D Navier-Stokes equation for the 2D velocity field v,

Here p is pressure (per unit mass), v is the kinematic viscosity coefficient, and f is an external force (per unit mass) exciting the turbulence. The Navier-Stokes equation (1) has to be supplemented by the incompressibility condition V v = 0. The pumping force f is also assumed to be divergentless, V • f = 0. Then the pressure p is determined by the equation

relating the pressure to the velocity gradients.

The pumping force f is assumed to be a random function of time and space with homogeneous statistics, with a correlation length lp much less than the system size L. The energy production rate per unit mass e is then expressed as e = (f • v). Here and below angular brackets mean temporal averaging. For a short-correlated in time forcing the average (f • v) is independent of the velocity profile. The inverse cascade and, further, the coherent flow are formed provided the Reynolds number is large. Estimating the flow velocity at the pumping length as vp ~ (elp)x/3 we find that the Reynolds number vplp/v is large provided lp ^ where is the viscous length

The inequality lp ^ is assumed to be satisfied below.

The estimation is correct outside the coherent vortices, in the hyperbolic region.

The mean (coherent) flow produces stretching the flow fluctuations making their life time of the order of | W"| 1 where | W| is the characteristic velocity gradient of coherent flow. That leads to the estimation

for typical velocity fluctuations. The estimation (5) implies that the fluctuation correlation length is less than the characteristic scale of the coherent motion. Note that due to the assumed inequality lp lv viscosity does play no role in forming the fluctuation life time

and the estimation (5) can be obtained simply by dimension reasoning. It follows from Eqs. (4), (5) that in the hyperbolic region

Thus, the inequality lv L guarantees smallness of the velocity fluctuations in comparison with the mean velocity there.

We now pass to analyzing the flow characteristics inside the vortex. The main goal of the analysis is to establish the profile of the mean flow there. As in the case of finite bottom friction [10, 11], the vortex interior can be separated into the vortex core and the region outside the core where the average velocity profile reveals universal scaling properties. To describe the vortex, we introduce polar coordinates in the reference system with the origin at the vortex center: r is the distance from the vortex center and y is the corresponding polar angle. An isotropic vortex can be described in terms of the mean polar velocity U, which is a function solely of r. Then the mean vorticity il = U/r + drU is a function solely of r as well. We designate the radial component of the fluctuating velocity as v and its polar component as u.

We now start deriving equations for the mean velocity. Averaging the Navier-Stokes equation (1) and taking its radial component, one obtains

In deriving the equation (7) we exploited the time homogeneity, the vortex isotropy and the incompressibility condition dvu + dr(rv) = 0. Note that the viscosity is dropped from Eq. (7). Taking the polar component of the averaged equation (1), one finds

where, again, we exploited the vortex isotropy and the flow incompressibility.

We now turn to the energy balance. By taking a scalar product of v with the Navier-Stokes equation (1) and averaging the result, one gets the energy budget

We consider the case where fluctuations are much smaller than the average flow. Then it is possible to neglect in Eq. (9) the third order term over fluctuations. We obtain from Eq. (2) an equation for the only possibly relevant cont