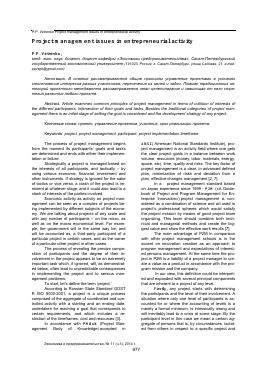 Abstract. Article examines common principles of project management in terms of collision of interests of the different participants, intersection of their goals and tasks. Besides the traditional categories of project management there is an initial stage of setting the goal is considered and the development strategy of any project.

The process of project management begins from the moment its participants' goals and tasks are determined and ends with either their implementation or failure.

Strategically a project is managed based on the interests of all participants, and tactically - by using various economic, financial, investment and other instruments. If strategy is ignored for the sake of tactics or vice versa, a crash of the project is imminent at whatever stage, and it could also lead to a clash of interests of the parties involved.

Economic activity as activity on project management can be seen as a complex of projects being implemented by different subjects of the economy. We are talking about projects of any scale and with any number of participants - on the micro, as well as on the macro economical level. For example, the government will in the same way be, and will be accounted as, a third-party participant of a particular project in certain cases, and as the owner of a particular other project in other cases.

The process of revealing the precise composition of participants and the degree of their involvement in the project appears to be an extremely important task which, if ignored, will, as demonstrated below, often lead to unpredictable consequences in implementing the project and to serious management problems.

According to Russian State Standard GOST R ISO 9000-2001, a project is a unique process comprised of the aggregate of coordinated and controlled activity with a starting and an ending date, undertaken for reaching a goal that corresponds to certain requirements, and which includes a restriction of the timeframes, cost and resources [3].

In accordance with PMBoK (Project Management Body of Knowledge) accepted in

ANSI ( American National Standards Institute), project management is an activity field where one gets the clear project goals in a balance between work volume, resources (money, labor, materials, energy, space, etc), time, quality and risks. The key factor of project management is a clear, in advanced defined plan, minimization of risks and deviation from a plan, effective changes management [2, 7].

In a project management standard based on Japan experience since 1999 - P2M («A Guidebook of Project and Program Management for Enterprise Innovation») project management is considered as a combination of science and art used in project's professional spheres which would satisfy the project mission by means of good project team organizing. This team should combine both technical and managerial methods and create the biggest value and show the effective work results [7].

The main advantage of P2M in comparison with other project management schools is in the accent on innovation creation as an approach to program management and expectations of interested persons management. At the same time the project in P2M is a liability of a project manager to create a value as a product in accordance with the program mission and the company.

In our view, this definition could be interpreted and expanded with several principal components that are inherent to a project of any level.

Firstly, any project starts with determining the participants and the level of their involvement. A situation where only one level of participants is accounted for or where the accounting of levels is a merely a formal minimum, is intrinsically wrong and will inevitably lead to a crisis at some stage. By the participant level in this case we mean a certain aggregate of persons that is, by circumstances, isolated from others in respect to a specific project and

that has in it its own goals, tasks and interests. In the event the project owner either consciously or unconsciously ignores the existence of such levels and, accordingly, of the different interests of the participants of different levels, a conflict among them is inevitable.

For example, a project on creating a small business involves, at minimum, 3 interconnected levels: the founder, the company staff, and the partners (contracting parties). The mentioned levels can be considered more widely: the company staff can be divided into the chief executive officer as a main executive unit in the company and other employee. At each level its own tasks are resolved, and mixing them can lead to a partial loss of control by participants of a different level. As a business grows, inev-

itably the state also becomes involved as another participant. We should note that so-called 'big business' is obliged in its activity to account for interests of the government and to measure its own interests against those of the nation.

Secondly, any project has its ideologist - a person who initially "nurtures" the project idea, forms its goals and tasks, and expects to receive a certain result. The important fact here is that only this participant knows in reality what the project itself is. The other participants cannot in principle grasp and comprehend the goals and expectations of the project that the ideologist has put into it. In order to attain this they would at minimum need to become the ideologist himself, to have his experience, to participate in all events that have in any way taken place at the stage when the project ideas and goals were formed.

Often the misunderstanding of these principles leads to various conflicts, when an employee cannot understand some steps and decisions made

by the CEO, considering them as useless, unde-manded.

The situation is made more difficult by the fact that any project, in addition to the declared goals, as a rule also contains many hidden ones. In this connection, for example, the broadly used statement that a company's main goal is to derive profit, can be accepted only in part: any company is created by specific persons, with rather definite human goals, and profit serves as a facilitating mechanism for implementing them. One should also keep in mind that part of the decisions on a project are made intuitively and irrationally, accordingly, part of the tasks is also resolved on an intuitive basis, based on past experience and expectations. Irrationality and the non-conscious nature of a large

scope of adopted decisions was confirmed in the works of Nobel Laureates George Akerlof and Joseph Stiglitz (2001) and Daniel Kahneman and Vernon Smith (2002). The research done by these scientists, including laboratory work, have given convincing evidence that "the greater part of our knowledge and ability to make decisions is of a non-conscious nature" (V. Smith) [5].

Therefore, the goals, tasks and results with which the participants are involved in a project are different. And that means that they should be accounted for differently, considering the points of mutual influence and conflict.

Thirdly, participants involved in a project as executives will inevitably experience shortage of information and understanding of the full picture of the project.

The executive, due to the reasons indicated above, does not know the essence of the project's goals and tasks. The degree of asymmetry of information and understanding depends on each specific case, but will never be equal to zero. In this connection clear evidence can be shown by the mechanism researched by Nobel Laureate in economics George Akerlof. The issues he spoke of concerning the trust factor in economic models, occurring conditions of uncertainty and asymmetry among market subjects can easily be traced in respect of market participants as well [1].

Often the lack of understanding of the essence of a project is accompanied by evident or hidden rejection by the executive due to the fact that he needs to resolve tasks that in the executive's mind are not objectively needed, though they are fully in line with the results that the ideologist expects in the future.

Fourthly, any project has an implementation timeframe. Thi