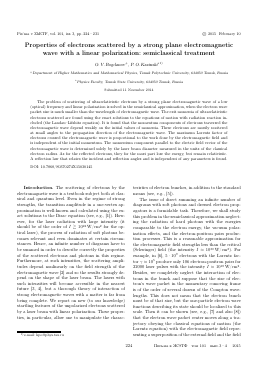 Properties of electrons scattered by a strong plane electromagnetic wave with a linear polarization: semiclassical treatment

Introduction. The scattering of electrons by the electromagnetic wave is a textbook subject both at classical and quantum level. Even in the regime of strong strengths, the transition amplitude in a one-vertex approximation is well-known and calculated using the exact solutions to the Dirac equation (see, e.g., [1]). However, for the laser radiation with large intensity (it should be of the order of I > 1024W/cm2 for the optical laser), the process of radiation of soft photons becomes relevant and even dominates at certain circumstances. Hence, an infinite number of diagrams have to be summed in order to describe correctly the properties of the scattered electrons and photons in this regime. Furthermore, at such intensities, the scattering amplitudes depend nonlinearly on the field strength of the electromagnetic wave [2] and so the results strongly depend on the shape of the laser beam. The lasers with such intensities will become accessible in the nearest future [3, 4], but a thorough theory of interaction of strong electromagnetic waves with a matter is far from being complete. We report on new (to our knowledge) startling features of the unpolarized electrons scattered by a laser beam with linear polarization. These properties, in particular, allow one to manipulate the charac-

teristics of electron bunches, in addition to the standard means (see, e.g., [5]).

The issue of direct summing an infinite number of diagrams with soft photons and dressed electron propagators is a formidable task. Therefore, we shall study this problem in the semiclassical approximation neglecting the radiation of hard photons with the energies comparable to the electron energy, the vacuum polarization effects, and the electron-positron pairs production processes. This is a reasonable approximation for the electromagnetic field strengths less than the critical (Schwinger) field (the intensity I « 1030W/cm2). For example, in [6], 5 • 109 electrons with the Lorentz factor 7 « 105 produce only 106 electron-positron pairs for 22000 laser pulses with the intensity I « 1018W/cm2. Besides, we completely neglect the interaction of electrons in the bunch and suppose that the size of electron's wave packet in the momentary comoving frame is of the order of several dozens of the Compton wavelengths. This does not mean that the electron bunch must be of that size, but the one-particle electron wave functions describing its state should be localized to this scale. Then it can be shown (see, e.g., [7] and also [8]) that the electron wave packet center moves along a trajectory obeying the classical equations of motion (the Lorentz equation) with the electromagnetic field representing a superposition of the external field and the field

created by an electron wave packet. If the wave packet is localized enough, the standard arguments used in deriving the Lorentz-Dirac (LD) equation (see, e.g., [9-16]) transform this Lorentz equation into the LD equation in the leading nontrivial order in the size of the wave packet. So, in fact, we have to investigate the solutions to the LD equation. This equation is the leading order approximation to the evolutionary equation for the average electron coordinate in the in-in formalism (see, e.g., [8]). In the standard S matrix approach, we need to sum an infinite number of diagrams with soft photons in order to describe such dynamics of the electron wave packet.

The quantum corrections due to radiation of hard photons can be approximately taken into account introducing an additional stochastic force to the equations of motion of the wave packet center [17]. This results in a broadening of the wave packet, but the dynamics of its center are still described by the classical equations of motion under the assumptions made. Usually, the relevance of quantum effects is characterized by the parameter x of [2]: if x > 1, the quantum effects are relevant. This estimation is based on a one-vertex amplitude with the initial Volkov state for the electron. The Volkov states are not localized in space. So these estimations are not immediately applicable to the case when the electrons are described by localized wave-packets and/or the radiation process becomes essentially non-perturbative. Nevertheless, on dimensional grounds, one may expect that for x ^ 1 the quantum corrections become relevant. However, as discussed thoroughly in [18], the electrons in a strong electromagnetic wave are rapidly de-excited to the state with a minimum radiation (the late time asymptotics), i.e., x becomes small since the electrons will move along the electromagnetic wave with the velocity close to the speed of light. The late time asymptotics, we shall use in analyzing the properties of the scattered electrons, are attractors for the set of physical solutions to the LD equation [19, 18]. Having emitted a hard photon and suffered a recoil, the electron tends to return to the initial trajectory. The correction to the LD equation due to spin can be also neglected for the unpolarized wave packets of electrons with a vanishing average spin. The effect of radiative polarization is negligibly small in the ultrarelativistic case we consider (see [20] and for a recent discussion, e.g., [21]).

So, if we apply the LD equation to describe the electron dynamics in the field of a plane linearly polarized electromagnetic wave with the intensity I > 1024W/cm2 and the energy of photons il « leV, we shall see that, in the ultrarelativistic limit 7 > 102, the electrons scattered by this wave can cross the laser

beam or be reflected from it. We consider a planar problem when the electron bunch moves in the polarization plane of the electromagnetic wave. A general problem can be reduced to this one by an appropriate Lorentz transform [18]. In the initial frame, the problem is essentially planar so long as the momentum component normal to the polarization plane is much lesser than the component lying in it. In the case of a planar motion, the momentum of an electron passed the electromagnetic wave depends weakly on the initial momentum and is determined by the laser beam parameters and the phase of electromagnetic wave at the electron entrance point. In particular, such electrons possess the identical momentum projections to the axis normal to the laser beam. This projection is specified solely by the laser beam diameter measured in the classical electron radii. As for the reflected electrons, there is a reflection law that relates the reflection and incidence angles. This law is independent of any parameters. The penetration depth of the reflected electrons to the laser beam is much smaller than the wavelength of the electromagnetic wave. Of course, these results are valid in a certain approximation that will be described in detail.

Practically speaking, we study the properties of the exact solutions of the so-called Landau-Lifshitz (LL) equation [22] since the exact physical solutions of the LD equation cannot be found for the field configurations we discuss. It was shown in [18] that, for such field configurations, the solutions of the LL equation provide a good approximation to the physical solutions of the LD equation even for the strong field strengths. Moreover, the solutions of the LL and LD equations tend asymptotically to each other at large times. The LL equation now becomes a standard tool in describing the evolution of electrons in a laser field with radiation reaction taken into account (see, e.g., [23-29]). The results of these papers also demonstrate that the behavior of electron's dynamics changes qualitatively for large field strengths of the laser wave. However, these investigations are mostly numerical and cannot give a clear insight what happens in this radiation dominated regime. In many of these papers, to simplify the numerical simulations, some terms of the LL equation are thrown away (see, e.g., [30, 31]) without a rigorous justification, or even one dimensional simulations are only given (see, e.g., [32, 33]). Therefore, it is of importance to analyze the exact solutions in the case when they can be found. Note that the exact solutions we shall study do not display the radiat