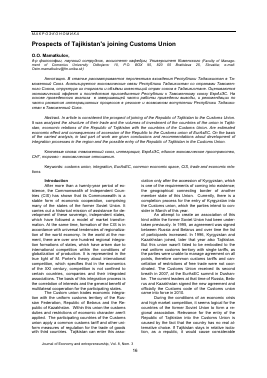 After more than a twenty-year period of existence, the Commonwealth of Independent Countries (CIS) has shown that its Commonwealth is a stable form of economic cooperation, comprising many of the states of the former Soviet Union. It carries out a historical mission of assistance for development of these sovereign, independent states, which have followed a model of market transformation. At the same time, formation of the CIS is in accordance with universal tendencies of regionaliza-tion of the world economy. In the world at the moment, there are over one hundred regional integration formations of states, which have arisen due to international competition within the conditions of globalization of production. It is represented in the true light of M. Porter's theory about international competition, which specifies that in the economics of the XXI century, competition is not confined to certain countries, companies and their integrated associations. The basis of this integration process is the correlation of interests and the general benefit of multilateral cooperation for the participating states.

The Custom union trades economic integration with the uniform customs territory of the Russian Federation, Republic of Belarus and the Republic of Kazakhstan. Within this union the customs duties and restrictions of economic character aren't applied. The participating countries of the Customs union apply a common customs tariff and other uniform measures of regulation for the trade of goods with third countries. Tajikistan can enter this asso-

ciation only after the accession of Kyrgyzstan, which is one of the requirements of coming into existence; the geographical connecting border of another member state of this Union. Currently, there is a completion process for the entry of Kyrgyzstan into the Customs union, which the parties intend to consider in March of this year.

An attempt to create an association of this kind within the former Soviet Union had been undertaken previously. In 1995, an agreement was signed between Russia and Belarus and over time the list of participants increased. In 1996, Kyrgyzstan and Kazakhstan joined, later that year also Tajikistan. But this union wasn't fated to be embodied to the real uniform customs territory with single tariffs, as the parties were unable to manage agreement on all points, therefore common customs tariffs and cancellation of restrictions of free trade were not coordinated. The Customs Union received its second breath in 2007, at the EurAsEC summit in Dushanbe. The current leaders at that time of Russia, Belarus and Kazakhstan signed the new agreement and officially the Customs code of the Customs union came into force in 2010.

During the conditions of an economic crisis and high market competition, it seems logical for the countries of the former Soviet Union to form a regional association. Relevance for the entry of the Republic of Tajikistan into the Customs Union is caused by the fact that the country has no real alternative choice. If Tajikistan stays in relative isolation, as a republic, it would cause considerable

problems with power security. External investments are currently not great, the only source of economic development is money transfers from migrants, who are typically from the countries of the Customs Union anyway. All this allows us to assume that the only correct decision, would be to join the Customs Union, which allows a resolution to all these issues.

It is logical to assume that interstate economic integration becomes more effective when levels of social and economic development of the states are higher, ethnic, religious and sociocultural elements of mentality within the people of the uniting countries become closer. However, a similar thesis hasn't yet received unambiguous empirical confirmation. At the same time, the theory of the international economic situation is reflected in the work of Russian and foreign economists A.P. Kireev, P. Krugman, J. Salvatore, etc., based on a number of the prerequisites favouring integration. Firstly, if trade barriers of member countries before entering a union are higher, the higher probability that union will lead to trade development between its members and not reorient it onto third countries. Secondly, lower trade barriers within the union, reduces the financial impact of reorientation with these third countries. Thirdly, increasing the number of member countries will make the union stronger, which leads to a decrease in the importation of goods from other producing countries with cheaper, low quality products. Fourthly, the economics of member countries has to remain competitive within the union and therefore not be too similar to each other. Fifthly, the geographical proximity and the development of transport infrastructure follows a favorable practice for all the members. Finally, the considerable volume of trade turnover before creation of the union and the economic interrelation between its potential members conduces to growth of opportunities for a considerable gain of welfare as the result of association. It seems that problems of integration of RT in the structures which are forming out of the former Soviet Union, are caused, by insufficient maturity of historical representations.

The economic integration which develops over many years, progresses to a historically developed community for the integrating countries. It represents broad interstate association, which possesses its own organizational structure, this can lead to a deeper diversity of labor and the exchanging of services, capitals, goods and labor for its participants.

functions of a system, an organism as a whole, secondly, integration — is the process conducing to such a state. From the point of view of its universal general scientific contents, it is impossible to disagree with this understanding of the nature of integration.

The greatest distribution has been gained through the definition where economic integration is considered as an objective, adjustable process of a mutual adaptation of national farms of two or more states, with uniform social and economic systems. Introductions of their economic structure in the corresponding international economic complexes leading to, eventually, a saving of time and an increase in public labor productivity. So, economic integration should be regarded as a rather high extent of internationalization of economic life when a certain degree of maturity of this process is reached. Regional association should be regarded as a set of institutional, legal, political and economic systems, a difficult whole, due to being in the process of evolution. Economic integration, according to the Tajik economist professor of S. D. Komilov, means rapprochement of national farms on the basis of mutual trade, a cultural exchange, joint and more effective use of economic resources, specializations and cooperation, creation of target movement of goods, the capitals, labor and other objects of economic relationship between the countries. It is difficult to disagree with such statements, after all at each stage within development of productive forces there are certain changes, including external economic relations between the countries, which conduces to economic integration. It should be noted that economic integration of Tajikistan within the CIS has several objective prerequisites to become effective, but it will demand a huge political will of the country leaders and considerable efforts for the development of a constructive program of integration actions, and also through creation of adequate institutional infrastructure on a large-scale cooperation. In the Republic of T