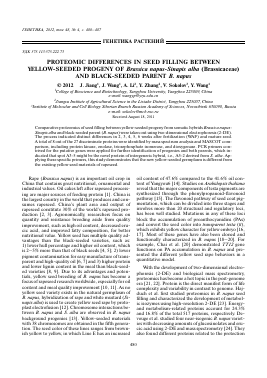 Comparative proteomics of seed filling between yellow-seeded progeny from somatic hybrids Brassica napus-Sinapis alba and black-seeded parent (B. napus) were taken out using two-dimensional electrophoresis (2-DE). The process indicated distinct differences in 2, 3, 4, 5, 6 weeks after fertilization (WAF) and mature seed. A total of 8 out of the 27 discriminate proteins were identified by mass spectrum analysis and MASCOT comparison, including protein kinase, enolase, triosephosphate isomerase, and dioxygenase. PCR primers contrived for the putative genes were applied for further identification of progenies and both parents, which indicated that spot A3-5 might be the novel protein of intergeneric hybrid, i.e., A5-2 derived from S. alba. Applying these specific primers, this study demonstrates that the new yellow-seeded germplasm is different from the existing yellow seed materials of rapeseed.

Rape (Brassica napus) is an important oil crop in China that contains great nutritional, ornamental and industrial values. Oil cakes left after rapeseed processing are major sources of feeding protein [1]. China is the largest country in the world that produces and consumes rapeseed. China's plant area and output of rapeseed constitute 30% of the world's rapeseed production [2, 3]. Agronomically, researchers focus on quantity and resistance breeding aside from quality improvement, such as high oil content, decreased eru-cic acid, and improved fatty composition, for better nutritional value. Yellow seed has multiple quality advantages than the black-seeded varieties, such as: 1) lower hull percentage and higher oil content, which is 2—5% more than that of black seeds [4, 5]; 2) lower pigment contamination for easy manufacture of transparent and high-quality oil [6, 7] and 3) higher protein and lower lignin content in the meal than black-seeded varieties [8, 9]. Due to its advantages and potentials, yellow seed breeding of B. napus has become a focus of rapeseed research worldwide, especially for oil content and meal quality improvement [10, 11]. As no yellow seed variety exists in the natural germplasm of B. napus, hybridization of rape and white mustard (Si-napis alba) is used to create yellow seed rape by protoplast electrofusion [12]. Chromosome interactions between B. napus and S. alba are observed in B. napus background progenies [13]. Yellow-seeded materials with 38 chromosomes are obtained in the fifth generation. The seed color of these lines ranges from brownish yellow to yellow, in which Line E has an increased

oil content of 47.6% compared to the 41.6% oil content of Yangyou6 [14]. Studies on Arabidopsis thaliana reveal that the major components of testa pigments are synthesized through the phenylpropanoid-flavonoid pathway [15]. The flavonoid pathway of seed coat pigmentation, which can be divided into three stages and involves more than 20 structural and regulatory loci, has been well studied. Mutations in any of these loci block the accumulation of proanthocyanidins (PAs) and convert the seed color into transparent testa (tt), which exhibits yellow character for yellow embryo [16, 17]. Most of these genes have also been cloned and functionally characterized in B. napus [18—20]. For example, Chai et al. [20] demonstrated TT12 gene functions on PA accumulation in B. napus and presented the different yellow seed rape behaviors in a quantitative model.

With the development of two-dimensional electrophoresis (2-DE) and biological mass spectrometry, proteomics has become a hot topic in the post-genome era [21, 22]. Protein is the direct manifest form of life complexity and variability in contrast to genome. Haj-duch et al. first studied proteomics in B. napus seed filling and characterized the development of metabolic isozymes using high-resolution 2-DE [23]. Energy-and metabolism-related proteins account for 24.3% and 16.8% of the total 517 proteins, respectively. De-vouge et al. studied four near-isogenic B. napus varieties with decreasing amounts of glucosinolates and eru-cic acid using 2-DE and mass spectrometry [24]. They also found different proteins related to the protection

system and metabolism of carbohydrates. Albertin et al. [25] applied comparative proteomics to study the leaf, stem, and root of B. napus and found that 43% of the protein was common to all three organs. Large-scale analysis of the proteome from the leaves of B. napus was performed and compared with the homozygous diploid progenitors, B. rapa and B. oleracea, and among the proteomic changes in B. napus in the early generations (F1—F4) [26, 27]. A comparative proteom-ic analysis of different yellow and black seed rape to detect pigment synthetic genes has never been reported. The objective of the current research is to study the different expressed proteins between yellow seed progeny from B. napus-S. alba and black seed parent of B. napus that may contribute to the exploration of yellow seed formation.

Plant Materials. Yellow seed line D244-18 (2n = 38) with 38 chromosomes are obtained in the fifth generation of somatic hybrids of B. napus-S. alba [14]. Black seed B. napus (cv. Yangyou6) parent was used as control. Seeds obtained 2 weeks after fertilization (WAF), 3WAF, 4WAF, 5WAF, 6WAF, and mature seed (Fig. 1) were frozen in liquid nitrogen and stored at —80°C for use. Lines D244-52, D244-6, D255-3, D246-5, and D211 were different yellow seed lines from B. napus-S. alba progenies [14]. Other yellow seed rape varieties or lines from interspecific hybridization, such as Yu-huang 1, K142, and B351 were bred by the South Agricultural University, Zhejiang Academy of Agricultural Sciences, and Shanxi Hybrid Rape Center, respectively.

Seed Protein Extraction and 2-DE. Total protein was isolated from the developing seeds according to the phenol-based procedure of Hajduch et al. [28]. Seeds (0.5 g) were grounded to fine powder with liquid nitrogen and resuspended in 10 ml homogenization solution (50% (v/v) phenol, 0.45 M Sucrose, 5 mM EDTA, 0.2% (v/v) p-mercaptoethanol (50 mM Tris-HCl, pH 8.8). The phenol phase was removed, and proteins were precipitated with 0.1 M ammonium acetate in 100% methanol, followed by washes with 80% acetone and 70% ethanol. The protein pellet was then dried and finally stored at —70°C for use.

DTT, 0.2% bioampholyte, and 0.001% bromophenol blue) by vortex for 1 h. After centrifugation at 8000 g for 5 min at 4°C, protein quantification was measured by the Coomassie brilliant blue method. The protein solution (containing 800 ^g protein) was carefully loaded onto an isoelectric focusing (IEF) tray. An immobilized pH gradient (IPG) gel strip (pH 4—7, 11 cm in length, Bio-Rad) was placed onto the protein and rehydrated for 12 h at 16°C. This procedure was followed by incubation in equilibration buffer A (1.5 M Tris-HCl, 6 M urea, 2% SDS, 20% glycerol, 2% DTT, pH 8.8) and then in equilibration solution B (1.5 M Tris-HCl, 6 M urea, 2% SDS, 20% glycerol, 2% io-doacetamide, pH 8.8) for 15 min at room temperature. Ultimately, strips were placed onto 12% acrylamide gels for second-dimension separation at 50 mA/gel for 5 h. Gels were washed in deionized water and stained with a Bio-Rad silver staining kit (Bio-Rad, Catalog 161-0449) according to the manufacturer's instructions. Image acquisition was conducted using a Gel Doc XR System, and protein spots were analyzed by PDQuest 2-D analysis software. Specific spots were excised and rinsed by distilled water and finally stored at —70°C for MS analysis.

Protein Identification by Mass Spectrometry. After rehydration of gel fragments in digestion buffer (5 mM DTT, 5 mM n-octyl glucopyranoside, 20 mM Tris, pH 7.8) at 4°C for 30—45 min, the remnant supernatant was removed, and 5—25 ^l of the digestion buffer (without trypsin) was added. Subsequently, the samples were digested with trypsin overnight at 37°C. Gel fragments were then covered with 50 mM NH4HCO3 (pH 7.8) and incubated at 37°C for 15 min. An equal volume of acetonitrile was added, and the samples were incubated at 37°C for another 15 min. After spinning the gel particles, the supernatant was collected. The extraction was repeated twice with formic acid-acetonitrile (1 : 1, v/v) solution, and all supernatants were collected and combined. Finally, extracts were dried in a vacuum centrifuge. Peptide masses were measured by Matrix-Assisted Laser Desorption/Ion-ization Time-of-Flight Mass Spectrometry (MALDI-TOF MS, Applied Biosystem, Framingham, MA, USA). Proteins were identified by searching the MSDB, NCBInr, and SwissProt databases using the MASCOT software search engine (http://www.matrix-science.com) [29].