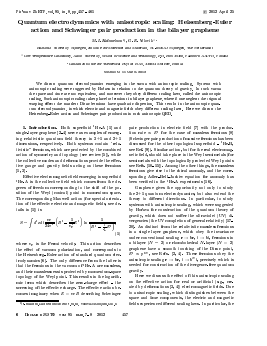 1. Introduction. Both superfluid 3He-A [1] and single-layer graphene [2-4] serve as examples of emerging relativistic quantum field theory in 3+1 and 2+1 dimensions, respectively. Both systems contain "relativistic" fermions, which are protected by the combined action of symmetry and topology (see review [5]), while the collective modes and deformations provide the effective gauge and gravity fields acting on these fermions [1, 3].

where vf is the Fermi velocity. This action describes the effect of vacuum polarization, and corresponds to the Heisenberg-Euler action of standard quantum electrodynamics [6]. The only difference from the latter is that the fermions in the vacuum of 3He-A are massless, and their masslessness is protected by momentum-space topology of the Weyl point. This results in the logarithmic term which describes the zero-charge effect - the screening of the effective charge. The effective action becomes imaginary when E > vpB describing Schwinger

pair production in electric field [7] with the production rate oc E2 for the case of massless fermions [8] (Schwinger pair production of massive fermions has been discussed for the other topological superfluid - 3He-B, see Ref. [9]). Similar action, but for the real electromagnetic field, should take place in the Weyl semimetals (for semimetals with the topologically protected Weyl points see Refs. [10-15]). Among the other things, the massless fermions give rise to the chiral anomaly, and the corresponding Adler-Bell-Jackiw equation for anomaly has been verified in the 3He-A experiments [16].

Graphene gives the opportunity not only to study the 2+1 quantum electrodynamics, but also extend the theory to different directions. In particular, to study systems with anisotropic scaling, which were suggested by Hofava for construction of the quantum theory of gravity, which does not suffer the ultraviolet (UV) divergencies (the UV completion of general relativity) [1720]. As distinct from the relativistic massless fermions in a single layer graphene, which obey the invariance under conventional scaling r —> br, I —t bt, fermions in a bilayer (N = 2) or rhombohedral iV-layer (N > 2) graphene have a smooth touching of the Dirac point, E2 oc p2N, see Refs. [2, 4]. These fermions obey the anisotropic scaling r —> br, I —t bNt, precisely which is needed for construction of the divergence-free quantum gravity.

one-loop action for the magnetic field is oc B2pg^4+D, where D is the space dimension and po is the infrared cut-off. This demonstrates that superfluid 3He-A with its D = 3 and N = 1 and the bilayer graphene with its D = N = 2 both correspond to the critical dimension Dc = 4 — N and thus they both give rise to the logarithmically divergent action for the magnetic field (which manifests itself as a logarithmic divergence of diamag-netic susceptibility in undoped bilayer graphene with the trigonal warping effects being neglected [21, 22]). However, for the electric field the action is oc E2p®^2^N. While for the superfluid 3He-A this again gives the logarithmic divergence as it happens in the relativistic systems with massless fermions, in the multiple-layered graphene with its D = 2 the action diverges in the infrared for any N > 1, giving rise to the power-law action oc E<-N+ 2)/(JV+1).

2.1. Anisotropic scaling for electromagnetic Held. The effective Hamiltonian for the bilayer graphene in the simplest approximation is [2, 4]

where a are Pauli matrices and to is the mass entering the quadratic band touching. Experimentally, to « 0.03to6, where me is the free-electron mass [23]. Here we neglect the degrees of freedom related to the tetrad gravity and concentrate on the degrees of freedom corresponding to the electromagnetic field (in principle the vector potential A may include not only the real electromagnetic field, but also the collective field which come from the degrees of freedom corresponding to the shift of the position of the Dirac point in momentum space, as in 3He-A). We shall use the natural units in which % = 1; electric charge e = 1; the vector field A has dimension of momentum, [A] = [£]-1; electric and magnetic fields have dimensions [£J] = [LTand [-B] = [L]-2, respectively.

For standard quantum electrodynamics emerging in the vacuum with massive electrons, the Lorentz invariance combined with the dimensional analysis gives the general form (B2 — E2)f(x,y) for the Heisenberg-Euler action [6] in terms of dimensionless quantities x = (B2 - E2)/M4, y = B • E/ikf4. Here M is the rest energy of electron, which violates the scale invariance in the infrared. Extension of the Born-Infeld electrodynamics to the anisotropic scaling has been considered in Ref. [25]. We consider the electrodynamics with

anisotropic scaling, which is induced by fermions obeying the Hamiltonian (2).

General effective action. In Eq. (2) there is only one dimensional parameter, the mass to. Combining the dimensional analysis with the anisotropic scaling, one obtains that the effective action for the constant in space and time electromagnetic field, which is obtained by the integration over the 2+1 fermions with quadratic dispersion, is the function of the dimensionless combination /i of electric and magnetic field

The change of the regime from electric-like to magnetic-like behavior of the action occurs at ß « 1. The asymptotical behavior in two limit cases, g(ß 0) = a and g(p —^ oo) = (b + ic)ß2/3, gives the effective actions for the constant in space and time magnetic and electric fields:

This should be contrasted with the single layer graphene, where the corresponding effective action for the 2+1 relativistic quantum electrodynamics is

Action for magnetic Held. First, let us consider the case E = 0. The action is

where a is undefined yet numerical coefficient. The simplest way to find a is the following. First, let us consider the case of uniform magnetic field and the sample of unit area, than, / d2x 1. Second, let us go to the imaginary time, exp (iS) exp (—/3F), where F is the free energy, ¡3 = 1/T is the inverse temperature. The change of the free energy in magnetic field is F =

where x is the magnetic susceptibility (per unit area). Thus, we have

The susceptibility for the case of bilayer within the model of purely parabolic spectrum has been calculated in Refs. [21, 22]. As we know, the D = 2 vacuum of fermions with quadratic touching, N = 2, corresponds to the critical dimension for the magnetic field action: it is logarithmically divergent for the case of zero doping. This logarithm should be cut at the energy of the reconstruction of the spectrum due to the farther hopping effects ("trigonal warping") and/or interelectron interaction (for the most recent discussion, see Ref. [23]). The answer is