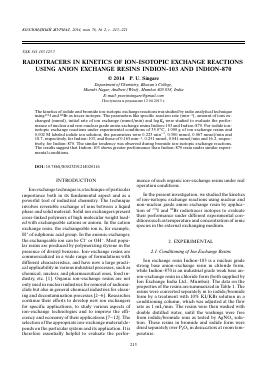 The kinetics of iodide and bromide ion-isotopic exchange reactions was studied by radio analytical technique using131I and 82Br as tracer isotopes. The parameters like specific reaction rate (min-1), amount of ions exchanged (mmol), initial rate of ion exchange (mmol/min) and logKd were studied to evaluate the performance of nuclear and non-nuclear grade anion exchange resins Indion-103 and Indion-870. For iodide ion-isotopic exchange reactions under experimental conditions of 35.0°C, 1.000 g of ion exchange resins and 0.002 M labeled iodide ion solution, the parameters were 0.223 min-1, 0.300 mmol, 0.067 mmol/min and 18.7, respectively, for Indion-103, and those of 0.165 min-1, 0.251 mmol, 0.041 mmol/min and 16.2, respectively, for Indion-870. The similar tendency was observed during bromide ion-isotopic exchange reactions. The results suggest that Indion-103 shows greater performance than Indion-870 resin under similar experimental conditions.

Ion exchange technique is a technique of particular importance both in its fundamental aspect and as a powerful tool of industrial chemistry. The technique involves reversible exchange of ions between a liquid phase and solid material. Solid ion exchangers present cross-linked polymers of high molecular weight loaded with exchangeable cations or anions. In the cation exchange resin, the exchangeable ion is, for example, H+ of sulphonic acid group. In the anionic exchanger, the exchangeable ion can be Cl- or OH-. Most popular resins are produced by polymerizing styrene in the presence of divinyl benzene. Ion-exchange resins are commercialized in a wide range of formulations with different characteristics, and have now a large practical applicability in various industrial processes, such as chemical, nuclear, and pharmaceutical ones, food industry, etc. [1]. Organic ion-exchange resins are not only used in nuclear industries for removal of radionu-clide but also in general chemical industries for cleaning and decontamination processes [2-6]. Researches continue their efforts to develop new ion exchangers for specific applications, to study various aspects of ion-exchange technologies and to improve the efficiency and economy of their applications [7-12]. The selection of the appropriate ion-exchange material depends on the particular system and its application. It is therefore essentially helpful to evaluate the perfor-

mance of such organic ion-exchange resins under real operation conditions.

In the present investigation, we studied the kinetics of ion-isotopic exchange reactions using nuclear and non-nuclear grade anion exchange resin by application of 131I and 82Br radiotracer isotopes to evaluate their performance under different experimental conditions such as temperature and concentration of ionic species in the external exchanging medium.

Ion exchange resin Indion-103 is a nuclear grade strong base anion-exchange resin in chloride form, while Indion-870 is an industrial grade weak base an-ion-exchange resin in chloride form (both supplied by Ion Exchange India Ltd., Mumbai). The data on the properties of the resins are summarized in Table 1. The resins were converted separately in to iodide/bromide form by a treatment with 10% KI/KBr solution in a conditioning column, which was adjusted at the flow rate as 1 mL/min. The resins were then washed with double distilled water, until the washings were free from iodide/bromide ions as tested by AgNO3 solution. These resins in bromide and iodide form were dried separately over P2O5 in desiccators at room temperature.

The radioisotopes 131I and 82Br used in the present experimental work were obtained from Board of Radiation and Isotope Technology (BRIT), Mumbai. The properties of the isotopes are described by Table 2.

In a stoppered bottle 250 mL of 0.001 M iodide ion solution was labeled with diluted 131I radioactive solution using a micro syringe, to achieve a radioactivity of around 15,000 cpm (counts per minute) for 1.0 mL of labeled solution when measured with y-ray spectrometer having NaI(Tl) scintillation detector. Since only about 50—100 ^L of the radioactive iodide ion solution was required for labeling the solution, its concentration remains constant, which was further confirmed by potentiometric titration against AgNO3 solution. The labeled solution of known initial activity (Aj) was kept in a thermostat at 30.0°C. The portion of 1.000 g of swelled and conditioned dry ion-exchange resin in the iodide form was transferred quickly into labeled solution, which was vigorously stirred, and the activity in cpm of1.0 mL of solution was measured. The solution was re-transferred to the same bottle containing labeled solution after measuring activity.

The iodide ion-isotopic exchange reaction can be described as:

form; I*q.) is an aqueous iodide ion solution labeled with 131I radiotracer isotope.

The activity of solution was measured subsequently within every 2.0 min during the experiment. The re-

sulting activity (Af) of the solution was also measured after 3 h after the equilibrium established [14—19]. The activity measured at various time intervals was corrected for background counts.

Similar experiments were carried out by equilibrating separately 1.000 g of ion exchange resin in iodide form with the labeled iodide ion solution of four different concentrations ranging up to 0.004 M at a constant temperature of 30.0°C. The same experimental sets were reproduced for higher temperatures up to 45.0°C.

where R-Br is an ion exchange resin in bromide form;

In a course of our experiments, we observed that the activity of measured solutions decreased rapidly

during the initial period of the reaction due to the ion-isotopic exchange, and then it changed slowly because of the decrease in the exchange rate and remained nearly constant afterward. Preliminary studies showed that the exchange reactions were of first order [1419]. The initial portion of the plot of the logarithm of activity vs. time changed sharply; whereas the rest of the curve changed slightly giving nearly a straight line (Fig. 1). Such kinetic behavior suggests that both the rapid and slow ion-isotopic exchange reactions occurred simultaneously [14-19]. The portion of the curve extrapolated to a zero time represents the contribution of slow process to the total activity. The activity values due the slow process were subtracted from those of total activity at various time intervals. The difference gives the activity obtained through the rapid process, from which the specific reaction rates (k) of rapid ion-isotopic exchange reaction were calculated. The amounts of iodide/bromide ions exchanged (mmol) on the resin were obtained from the initial and resulting activities of solution and the amount of exchangeable ions in 250 mL of solution. From the amount of ions exchanged on the resin (mmol) and the specific reaction rates (min-1), the initial rate of ion exchange (mmol/min) was calculated.

Because of larger solvated size of bromide ion as compared to that of iodide one, the exchange of bromide ions occurred at the slower rate than that of iodide. Under similar experimental conditions, the calculated values of specific reaction rate (min-1), amount of exchanged ion (mmol) and initial rate of ion exchange (mmol/min) were lower for bromide ion-isotopic exchange reaction than that with iodide ions (the data are summarized in Tables 3 and 4). For both bromide and iodide ion-isotopic exchange reactions, the values of specific reaction rate increased with an increase in concentration of ionic solution from 0.001 to 0.004 M (Table 3).