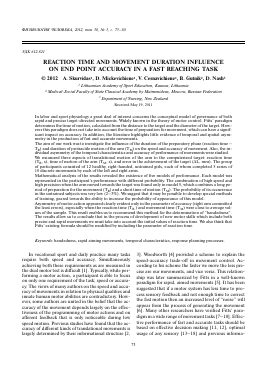 In labor and sport physiology a great deal of interest concerns the conceptual model of governance of both rapid and precise target-directed movements. Widely known in the theory of motor control, Fitts' paradigm determines the time of motion, calculated from the distance to the target and the diameter of the target. However this paradigm does not take into account the time of preparation for movement, which can have a significant impact on accuracy. In addition, the literature highlights little evidence of temporal and spatial asymmetry in the production of fast and accurate movements.

The aim of our work was to investigate the influence of the duration of the preparatory phase (reaction time — TR) and duration of protractile motion of the arm (TM) on the speed and accuracy of movement. Also, the individual asymmetry of the temporal characteristics and accuracy of performance of movements were studied. We measured three aspects of translational motion of the arm to the computerized target: reaction time (TR, s), time of motion of the arm (TM, s), and error in the achievement of the target (AL, mm). The group of participants consisted of 12 healthy, right-handed, untrained girls, each of whom completed 5 series of 10 discrete movements by each of the left and right arms.

Mathematical analysis of the results revealed the existence of five models of performance. Each model was represented in the participant's performance with different probability. The combination of high speed and high precision when the arm moved towards the target was found only in model 5, which combines a long period of preparation for the movement (TR) and a short time of motion (TM). The probability of its occurrence in the untrained subjects was very low (2—3%). We suggest that it may be possible to develop special methods of training, geared towards the ability to increase the probability of appearance of this model. Asymmetry of motor action appeared clearly evident only in the parameter of accuracy (right arm committed the least errors), especially when the reaction time (TR ) and movement time (TM) were close to average values of the sample. This result enables us to recommend this method for the determination of "handedness". The results allow us to conclude that in the process of development of new motor skills which include both precise and rapid movements we must take into account the initial values of reaction time. We also think that Fitts' existing formula should be modified by including the parameter of reaction time.

In vocational sport and daily practice many tasks require both speed and accuracy. Simultaneously achieving both these requirements as are measured in the dual motor test is difficult [1]. Typically, while performing a motor action, a participant is able to focus on only one requirement of the task; speed or accuracy. The views of many authors on the speed and accuracy of movements in relation to physical qualities and innate human motor abilities are contradictory. However, some authors are united in the belief that the accuracy of the movement depends largely on the effectiveness of the programming of motor actions and on afferent feedback that is only noticeable during low speed motion. Previous studies have found that the accuracy of different kinds of translational movements is largely determined by their informational structure [2,

3]. Woodworth [4] provided a scheme to explain the speed-accuracy trade-off in movement control. According to his scheme the faster we move the less precise are our movements, and vice versa. This relationship was later summarized by Fitts in a well-known paradigm for rapid, aimed movements [5]. It has been suggested that if a motor system has less time to process sensory feedback and not enough time to correct the fast motion then an increased level of "noise" will appear from the process of generating the movement [6]. Many other researchers have verified Fitts' paradigm in a wide range ofmovement tasks [7—10]. Effective performance of fast and accurate tasks should be based on effective decision making [11, 12], optimal usage of any sensory [13—18] and previous informa-

Preliminary corrections and preprogramming are also related to general principles of management of rapid and precise movements [27]. The role of reaction time during fast and precise movement is not clear. Fitts and Peterson [8] reported that reaction time increased when movement amplitude was lengthened. Klapp [28] reported the effect of target diameter on reaction time: for small targets; reaction time decreased with increasing movement length but reaction time remained unchanged (or increased modestly) when target diameter was large. Mohagheghi and Anson [29] identified several potential variables that influenced reaction time: limb posture at the start of a response, number of limb segments required to perform the task; and the effect of pooling reaction time data from targets located left and right of the start point, and from near and far targets. Also, there has been a lack of research regarding movement duration for target-directed movements [30] and time to plan movements [31]. It has been suggested that end-point accuracy is affected by manipulation of both time to plan movements and response difficulty [31].

Battaglia and Schrater [32] reported the influence of viewing time on the accuracy of goal-directed movement. People can utilize their individual visual and motor variability as functions of time and can combine these components to optimize their performance in a task to minimize reaching errors. Sometimes, individual ability to execute fast and accurate movements is amazing [33]. The question arises, how often such motions may be produced by non-trained people and what the temporal structure of these motions is in terms of reaction and movement times? There is also a lacuna in the literature in terms of which arm (left or right) reacts faster and more accurately when it is performing a dual goal-directed task (fast speed and high end point accuracy at the same time).

The purpose of this study was to determine the conditions for the most effective temporal structure of target-directed motion with which the arm can reach its maximum accuracy and speed, as well as to determine any possible differences in the characteristics of this structure for movements of the right and left hands in right-handed people.

Participants. Participants involved in the experiment consisted of 12 healthy, right-handed, untrained women, 18—25 years-old. Their body mass indexes were mainly of the mesomorphic type. Gender of the participants was selected because of a documented lower level of effectiveness of motor performance in females than in males in complex motor tasks [34—

36]. The research was approved by the Local Research Committee of the Lithuanian State Academy of Physical Education and informed consent was obtained from each participant before their entry into the study. The degree of right-handedness was determined using the method of Sainburg and Kalakanis [37], and confirmed by a laterality level of more than +8 on the 10-point Edinburgh Inventory [38]. All participants had normal or corrected-to-normal visual acuity and had no significant neurological history. Left and right arms were tested in separate sessions on the same day. The first arm tested was alternated across participants.

Experimental set-up and procedures. The latest certified model of the 'Analyzer of dynamic parameters of human movement' (patent number 5251, 200508-25, Lithuania) was used for the experiment. The set-up consisted of an armchair in front of a computer monitor on a table. Two vertically oriented joysticks (one for each hand) were placed on the table in front of the monitor. The position of the joysticks and the target was standardized and permanent throughout the experiment. Participants could move the joysticks, but not the target. Only one hand was used at a time. There was an electronically based monitoring system which constantly registered and recorded the distance between the point on the computer screen indicated by the joysticks and the target, the onset of each movement, the maximal speed of protraction in the sagittal plane, the time period for achievement of this speed, and the total time of protraction. Each participant sat comfortably in an armchair 0.70 m away from, and in front of the computer screen which displayed a gray target with a diameter of 6 mm. The target was located at the same height as the eyes of the participant. The initial joystick start position was indicated on the computer screen directly below the target. A movement of 30 cm of the joystick corresponded to the distance between the start position and the target on the computer screen. A change of color of the target from grey to red conveyed the need to be prepared for the start of motion (the "ready" signal).