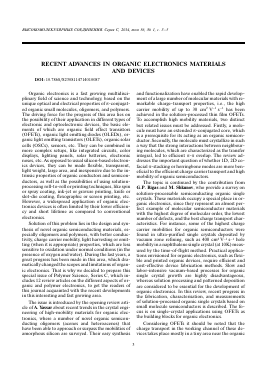 Organic electronics is a fast growing multidisci-plinary field of science and technology, based on the unique optical and electrical properties of n-conjugat-ed organic small molecules, oligomers, and polymers. The driving force for the progress of this area lies on the possibility of their application in different types of electronic and optoelectronic devices, the basic elements of which are organic field effect transistors (OFETs), organic light emitting diodes (OLEDs), organic light emitting transistors (OLETs), organic solar cells (OSCs), sensors, etc. They can be combined in more complex setups, like integrated circuits, color displays, lighting panels, solar batteries, electronic noses, etc. As opposed to usual silicon-based electronics devices, they can be made flexible, transparent, light weight, large area, and inexpensive due to the intrinsic properties of organic conductors and semiconductors, as well as the possibilities of using solution-processing roll-to-roll or printing techniques, like spin or spray coating, ink-jet or gravure printing, knife or slot-die coating, flexographic or screen printing, etc. However, a widespread application of organic electronics devices is often limited by their lower efficiency and short lifetime as compared to conventional electronics.

Solution of this problem lies in the design and synthesis of novel organic semiconducting materials, especially oligomers and polymers, with better conductivity, charge carrier mobility, light harvesting or emitting (when it is appropriate) properties, which are less sensitive to oxidation under normal conditions (in the presence of oxygen and water). During the last years, a great progress has been made in this area, which dramatically changed the scopes and limitations of organic electronics. That is why we decided to prepare this special issue of Polymer Science, Series C, which includes 12 review articles on the different aspects of organic and polymer electronics, to get the readers of this journal acquainted with the recent developments in this interesting and fast growing area.

The issue is introduced by the opening review article of A. Yassar about recent trends in the crystal engineering of high-mobility materials for organic electronics, where a number of novel organic semiconducting oligomers (acenes and heteroacenes) that have been able to approach or surpass the mobilities of amorphous silicon are surveyed. Their easy synthesis

and functionalization have enabled the rapid development of a large number of molecular materials with remarkable charge-transport properties, i.e., the high carrier mobility of up to 30 cm2 V-1 s-1 has been achieved in the solution-processed thin film OFETs. To accomplish high mobility materials, two distinct but related issues must be addressed. Firstly, a molecule must have an extended n-conjugated core, which is a prerequisite for its acting as an organic semiconductor. Secondly, the molecule must crystallize in such a way that the strong interactions between neighbouring molecules, which are characterized as the transfer integral, led to efficient n-n overlap. The review addresses the important question of whether 1D, 2D co-facial n-stacking or herringbone modes are more beneficial to the efficient charge carrier transport and high mobility of organic semiconductors.

The topic is continued by the contribution from G.P. Rigas and M. Shkunov, who provide a survey on solution-processable semiconducting organic single crystals. These materials occupy a special place in organic electronics, since they represent an almost perfect example of molecular semiconductor materials with the highest degree of molecular order, the lowest number of defects, and the best charge transport characteristics. For instance, some of the highest charge carrier mobilities for organic semiconductors were found in ultra-purified single crystals deposited by vacuum zone refining, such as 400 cm2 V-1 s-1 hole mobility in a naphthalene single crystal (at 10K) measured by the time-of-flight method. Practical applications envisioned for organic electronics, such as flexible and printed organic devices, require efficient and cost-effective device fabrication methods. Slow and labor-intensive vacuum-based processes for organic single crystal growth are highly disadvantageous, whereas solution processing and patterned deposition are considered to be essential for the development of organic electronics. In this review, recent progress in the fabrication, characterisation, and measurements of solution-processed organic single crystals based on small molecule semiconductors is described. The focus is on single-crystal applications using OFETs as the building blocks for organic electronics.

One of the recent trends in organic transistors is their usage for light emitting in OLETs, which combine switching properties of OFETs with lighting properties of OLEDs. It is covered in this issue in the contribution of A.N. Aleshin, describing OLETs based on the nanocomposites of semiconducting polymers (PFO, MEH-PPV) with inorganic nanoparticles ZnO. Asymmetrical electrodes (Au and Al) were used for the injection of electrons and holes into ZnO and PFO or MEH-PPV, respectively. The data obtained show that these nanocomposites can work both in unipolar and ambipolar modes. OLETs based on PFO:ZnO and MEH-PPV:ZnO emit in green and orange spectral ranges, while the emission intensity increases at higher voltages at source-drain and gate, both in positive and negative bias, as well as at higher concentrations of the nanoparticles. These findings indicate a huge potential for solution processable organic semiconductors and ZnO nanocomposites for modern printed technologies of organic electronics.

Another example of organic light emitting devices and material used thereof is surveyed in the review article by L.N. Bochkarev, A.V. Rozhkov, and M.N. Bo-chkarev, which is devoted to electroluminescent lan-thanide-containing polymers. It summarizes recent progress on the synthesis, optical and electroluminescent properties of carbon-chain polymers, containing ions of rear-earth elements, like Eu3+ and Tb3+, chemically bonded via coordination with ligands to a polymer chain. The main emphasis of this contribution is the influence of ligand surroundings of the lanthanide atoms and of the polymer structure on their emission properties. Possible ways of increasing the electroluminescence efficiency of the lanthanide-containing polymers are discussed.

D.M. Il'gach, and A.V. Yakimansky,1 devoted to the spontaneous and stimulated emission of copolyfluo-renes at photo and electrical excitation. This article surveys recent literature and original authors' data on peculiarities of the excitation energy deactivation in a widely researched class of organic semiconducting polymers — copolyfluorenes. It is nicely exemplified by a lot of spectral-luminescent, electroluminescent, and laser properties of a number of copolyfluorenes synthesized. The advantages and drawbacks of this interesting class of organic semiconductors are discussed and the ways of creation of different organic electronic devices on their base are described.

Conjugated polymers are one of the most important classes of organic semiconducting materials, which can be used for creating functional layers in any type of the organic electronics devices. Perhaps, the most intensive progress in the last years was achieved for their application in OSCs, the efficiency of which reached 10—12% that is comparable to those of widely used silicon devices. A contribution by A.V. Akkuratov and P.A. TToshin1 presents a comprehensive review on one of the most prospective classes of conjugated co-polymers, containing electron deficient monomer units based on benzothiadiazole, benzooxadiazole, or benzotriazole in the main chain. It contains a nice introduction into organic solar cells, considers basic working principles of the so-called "bulk heterojunc-tion" OSCs, their main characteristics, and possible ways for their optimization. Different synthetic methods used for the synthesis of n-conjugated copolymers, like Stille and Suzuki reactions, as well as a direct arylation reaction, are briefly described. However, the main attention of this contribution is devoted to the electro-optical and photovoltaic characteristics of n-conjugated copolymers, containing different monomer units in their molecular structure.

For efficient charge recombination in OSCs, their functional layer con