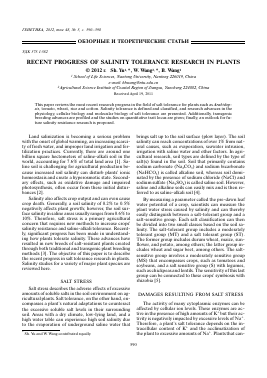 This paper reviews the most recent research progress in the field of salt tolerance for plants such as Arabidop-sis, tomato, wheat, rice and cotton. Salinity tolerance is defined and classified, and research advances in the physiology, cellular biology and molecular biology of salt tolerance are presented. Additionally, transgenic breeding advances are profiled and the studies on quantitative trait locus are given; finally, an outlook for future salinity resistance research is proposed.

Land salinization is becoming a serious problem with the onset of global warming, an increasing scarcity of fresh water, and improper land irrigation and fertilization practices. Currently, there are around one billion square hectometers of saline-alkali soil in the world, accounting for 7.6% of total land area [1]. Saline soil is challenging for agricultural production because increased soil salinity can disturb plants' ionic homeostasis and create a hyperosmotic state. Secondary effects, such as oxidative damage and impaired photosynthesis, often occur from these initial disturbances [2].

Salinity also affects crop output and can even cause crop death. Generally, a soil salinity of 0.2% to 0.5% negatively affects plant growth; however, the soil surface salinity in saline areas usually ranges from 0.6% to 10%. Therefore, salt stress is a primary agricultural concern that requires new methods to increase crops' salinity resistance and saline-alkali tolerance. Recently, significant progress has been made in understanding how plants tolerate salinity. These advances have resulted in new breeds of salt-resistant plants created through both traditional and transgenic plant breeding methods [3]. The objective of this paper is to describe the recent progress in salt tolerance research in plants. Salinity studies for a variety of major plant species are reviewed here.

Salt stress describes the adverse effects of excessive amounts of soluble salts in the soil environment on agricultural plants. Salt tolerance, on the other hand, encompasses a plant's natural adaptations to counteract the excessive soluble salt levels in their surrounding soil. Areas with a dry climate, low-lying land, and a high water table can experience high soil salinity due to the evaporation of underground saline water that

brings salt up to the soil surface (plow layer). The soil salinity can reach concentrations of over 1% from natural causes, such as evaporation, seawater intrusion, irrigation with saline water and other factors. In agricultural research, soil types are defined by the type of salt(s) found in the soil. Soil that primarily contains sodium carbonate (Na2CO3) and sodium bicarbonate (NaHCO3) is called alkaline soil, whereas soil dominated by the presence of sodium chloride (NaCl) and sodium sulfate (Na2SO4) is called saline soil. However, saline and alkaline soils can easily mix and is then referred to as saline-alkali soil [4].

The activity of many cytoplasmic enzymes can be affected by cellular ion levels. These enzymes are active in the presence of high amounts of K+ but their activity is negatively impacted by excessive levels of Na+. Therefore, a plant's salt tolerance depends on the in-tracellular content of K+ and the acclimatization of the plant to excessive amounts of Na+. Plants that can-

not adequately remove the excess Na+ from the soil suffer from hyperosmotic stress, ion poisoning and oxidative damage.

Plants have difficulty absorbing free water from saline soil and can experience fluid extravasation because excessive salinity in the soil will decrease the water potential and cause water to reenter the soil. Hence, one of the common consequences of salt stress is physiological drought, known as hyperosmotic stress [4]. Ion poisoning arises from two different processes. The influx of large amounts of Na+ into plants increases the Na+ content, which is poisonous to the plant because it reduces or deactivates the activity of several enzymes. The functional loss of these enzymes jeopardizes the integrity of cell membrane system and increases the permeability of the cell's plasma membrane. As a result, metabolic imbalances occur in plants. The other phenomenon involved is the antagonism among ions during ion absorption. For instance, relatively high concentrations of Na+ and Cl— can obstruct the uptake of K+, Ca2+, Mg2+ and Li+ [6], which causes malnutrition and retards plant growth. To reestablish ionic homeostasis and alleviate hyperosmotic stress, leaf surfaces close their stoma to suppress transpiration, thus minimizing the plant's water deficit and its carbon dioxide uptake. As a result, photosynthesis is reduced, and the activity of phosphoenol pyruvate carboxylase (PEP carboxylase) and ribulose-1,5-bisphosphate carboxylase (RUBP carboxylase) is decreased, which breaks up chloroplasts to resolve the coupling of oxidative phosphorylation. Unused electrons from the photosynthetic electron transport chain react with oxygen to form reactive oxygen species (ROS) to cause a rapid increase in intracellular ROS, resulting in metabolic inactivation and cell death as well as a decline in quality and yield of plants, a process known as oxidative damage. Salt stress also causes cells to accumulate toxic metabolites. For example, under salt stress, wheat and maize produce free ammonia due to oxidative stress, which is detrimental to cells. Besides, there is a negative correlation between the degree of salt stress and crop growth rate. Retarded growth is partly caused by inefficient photosynthesis due to stomatal closure and limited CO2 uptake. More importantly, salt stress inhibits cell division and expansion. A potentially important link between stress and cell division was revealed by inducing ICK1 in Arabi-dopsis. ICK1 is a cyclin-dependent protein kinase that helps drive the cell cycle. Salt stress causes ABA to accumulate, which induces ICK1 and inhibits cell division. Cell division could also be influenced through transcriptional and/or post-transcriptional regulation of other components of the cell cycle machinery [2]. Therefore, Salt stress changes the individual development, prohibits the growth and differentiation of tissues and organs, shortens the growing period, reduces the length and number of lateral roots and the leaf area, darkens the leaf color, and creates a more slender

stem that cannot support the weight of shoots and roots [7].

MECHANISMS OF SALINITY TOLERANCE IN

Most plants use the following signaling pathways to adapt to highly saline environments. First, the root epidermis and cortex cell membrane receptor proteins sense stress signals. These signals generate second messenger proteins that communicate with other cells, while also activating relevant protein kinases. The kinases either directly inhibit the expression of stress—responsive genes or affect the expression of transcription factors to regulate downstream stress-responsive target genes [8]. These genes work in concert during a plant's salt stress response by integrating their signaling networks to ensure that the plant survives the salinity challenge.

Generally, plants take advantage of three main surviving strategies to solve the salinity challenges. Firstly, the ability of the across membrane transportation of Na+ is enhanced to achieve ionic balance. Secondly, certain materials such as proline and BADH are synthesized and accumulated so as to reduce the osmotic stress. Thirdly, the activity of certain enzymes for scavenging ROS is improved to prevent oxidative damages.

To realize the strategies mentioned above, specific mechanisms are performed in plants.

Firstly, a common way to improve salt tolerance is to compartmentalize the excess Na+ in special tissues or cells or to efficiently secrete Na+ from the plant's roots and shoots [9, 10]. To compartmentalize Na+, the plant uses cellular ion pumps to move the salt against the concentration gradient into a vacuole, which not only decreases the water potential in the cell but also prevents damage to the protoplasm. Meanwhile, compatible osmolytes are synthesized to compensate for the osmotic difference between the vacuole and the cytoplasm [6]. Unlike animal cells, which have Na+-K+ ATPase, or fungal and some algal cells, which have Na+ ATPase for Na+ efflux, plant cells do not contain Na+ ATPase. However, Na+-H+ antiporters are abundant in plant membrane vesicles. The proton pump discharges H+ across the membrane while driving membrane transport of Na+. Vesicles equipped with Na+-H+ antiporters are directly involved in Na+