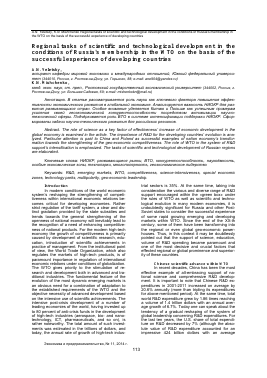 Abstract. The role of science as a key factor of effectiveness' increase of economic development in the global economy is examined in the article. The importance of R&D for the developing countries' evolution is analyzed. Particular attention is paid to China and Poland as successful examples of nation economy's transformation towards the strengthening of the geo-economic competitiveness. The role of WTO in the system of R&D support's intensification is emphasized. The tasks of scientific and technological development of Russian regions are elaborated.

In modern conditions of the world economic system's reshaping the strengthening of competitiveness within international economic relations becomes critical for developing economies. Rather strict regulation of the tariff system, a clear and distinct gradation provided by the state subsidies and trends towards the general strengthening of the openness of national economy will inevitably lead to the recognition of a need of enhancing competitiveness of national products. For the modern high-tech economy the growth of competitiveness is primarily caused by development of scientific research, education, introduction of scientific achievements in practice of management. From the institutional point of view, the World Trade Organization, which also regulates the markets of high-tech products, is of paramount importance in regulation of international economic relations under conditions of globalization. The WTO gives priority to the stimulation of research and development both in advanced and traditional industries. The fundamental feature of the evolution of the most dynamic emerging markets is an obvious need for a combination of adaptation to the established requirements of the WTO and the objective necessity of advanced development based on the intensive use of scientific achievements. The intensive post-crisis development of a number of leading economies of the world, having invested up to 80 percent of anti-crisis funds in the development of high-tech industries (aerospace, bio- and nano-technology, ICT, pharmaceuticals, and so on), is rather noteworthy. The total amount of such investments was estimated in the trillions of dollars, and today, the annual rate of growth of high-tech indus-

trial sectors is 35%. At the same time, taking into consideration the various and diverse range of R&D support encouraged within the «green box» under the rules of WTO as well as scientific and technological evolution in many modern economies, it is undoubtedly significant for Russia and other PostSoviet states to consider the successful experience of some rapid growing emerging and developing markets within WTO. Since the end of the xX-th century, some of them have been transforming into the regional or even global geo-economic powerhouses. Thus, in this context it may be doubtlessly pointed out that the support of science, education, volume of R&D spending became paramount and one of the most decisive and crucial factors that effected regional or global prominence and superiority of these countries.

In recent decades, China has been the most effective example of all-embracing support of national science and comprehensive R&D development. It is important to note that Chinese R&D expenditures in 2001-2011 increased on average by 20.6% annually (more than tripling its expenditures for above-mentioned period). At the same time, total world R&D expenditure grew by 1.86 times reaching a volume of 1.4 trillion dollars with an annual average growth of 6.7%. Today one can speak about the tendency of a gradual reshaping of the system of global leadership concerning R&D expenditures. For the last ten years, the U.S. share of total expenditure on R&D decreased by 7% (although the absolute value of R&D expenditure accounted for an impressive 424 billion dollars with an average

growth of 4.3%), and one of the EU countries decreased by 4%. The share of East and South-East Asia, by contrast, increased by 9% during the analyzed period.

East and South East Asia as a whole 34

It is also noteworthy that China's share of spending on environmental and high-tech energy-saving technologies in 2012 amounts to 61% of the corresponding spending of developing economies. In general, today the most dynamic economies in terms of increasing R&D expenditures and of increase in the number of scientific workers are such countries as China, South Korea, Brazil and India [8]. Since the middle of the 1990s the number of scientific workers in China has increased more than 3 times.

For a long period of negotiation processes China actively supported and fostered its internal innovative development. There was happening the encouragement of Chinese exports reorientation towards its greater intensity. In addition, the Chinese government has paid great attention to the national import and attraction of various types of products of intellectual property and high technology equipment to local manufacturing enterprises.

From the beginning of participation in the structure of the World Trade Organization (2001), China significantly intensified its activity within the sphere of intellectual property rights protection. For the first two years after accession to the WTO, China has increased the number of applications for patents in 3 times, which was largely due to the intensified struggle in the Chinese market after the start of liberalization of foreign trade in the conditions of transition to the WTO terms.

Being WTO member, China has been actively strengthening the scientific and technological potential of economy. PRC continued a policy aimed at attracting foreign investments and highly skilled workers in enterprises which specialize in production of high-tech products. The attraction of foreign direct investment in these enterprises is, undoubtedly, of paramount importance and yields for these companies large-scale benefits, including more favorable regime for its operations in China, rather than national treatment. While the Chinese government has control stock in such joint companies, the course of the enterprises on the use of Chinese components was largely determined.

In general, the provision of various types of preferential regimes for domestic producers in this field has also particular significance. First of all, it is a question of providing a favorable taxation regime to companies and enterprises, as well as a number of scientific-industrial clusters engaged in R&D [4, 5]. Moreover, the implementation of R&D support by China was expressly stipulated during the process of China's accession to the WTO. For instance, in

Harbin such companies are exempt from VAT payment for three years from the moment of the accreditation of the enterprise. Furthermore, for three years else preferential 50 percent VAT exemption is provided [7]. In addition, a number of export-oriented branches receive full refund of VAT from the state. As machine building is one of industries with high added value, a number of its subindustries enjoy such support. These subindustries include aviation and aerospace industry, electrical engineering, instrument-making industry and so on. As economic self-sufficiency of China in machine-building products enhances, the protectionism aimed at import replacement and based on the methods compatible with the WTO rules (including the measures of non-tariff regulation), strengthens.

The Chinese government has paid great attention to the personnel. During the transition period within WTO Chinese state prepared millions of young specialists in the domain of international law who will be able to defend the interests of the Chinese machine-building and other industrial exports in the framework of disputes in the WTO. In addition, Chinese did all their best to prepare engineers who are actively working on the up-to-date samples of foreign high-tech engineering products (for example, military aircraft) and the creation of their latest models throughout the entire coverage of machine-building products.

Despite China's accession to WTO, that led to the establishment of the uniform rate of profit tax for all companies regardless of their nationality from 2013 as a result of the end of the transition period