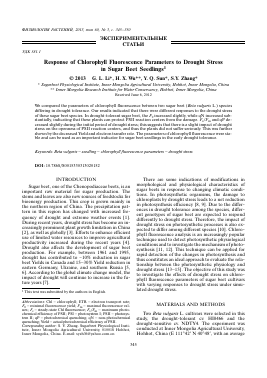 We compared the parameters of chlorophyll fluorescence between two sugar beet (Beta vulgaris L.) species differing in drought tolerance. Our results indicated that there were different responses to the drought stress of these sugar beet species. In drought-tolerant sugar beet, the F0 increased slightly, while qN increased substantially, indicating that these plants can protect PSII reaction centers from the damage. Fv/Fm and qP decreased slightly during the initial period of drought stress; this suggests that there is a slight impact of drought stress on the openness of PSII reaction centers, and thus the plants did not suffer seriously. This was further shown by the decreased Yield and electron transfer rate. The parameters of chlorophyll fluorescence were stable and can be used as an important indicator for sugar beet seedlings in the early drought tolerance.

Sugar beet, one of the Chenopodiaceae beets, is an important raw material for sugar production. The stems and leaves are also new sources of feedstocks for bioenergy production. This crop is grown mainly in the northern region of China. The precipitation pattern in this region has changed with increased frequency of drought and extreme weather events [1]. During recent years, drought stress has become an increasingly prominent plant growth limitation in China [2], as well as globally [3]. Efforts to enhance efficient use of limited water resources to improve agricultural productivity increased during the recent years [4]. Drought also affects the development of sugar beet production. For example, between 1961 and 1995, drought has contributed to ~10% reduction in sugar beet Yields in Canada and 15-30% Yield reduction in eastern Germany, Ukraine, and southern Russia [5, 6]. According to the global climate change model, the impact of drought will continue to increase in the future years [7].

Two Beta vulgaris L. cultivars were selected in this study, the drought-tolerant cv. HI0466 and the drought-sensitive cv. NDTY4. The experiment was conducted at Inner Mongolia Agricultural University, Hohhot, China (E 111°42' N 40°48', with an average

altitude of1051.5 m). Plastic pots (60 x 40 x 20 cm) were used with 30 kg soil per pot collected from 0-30 cm depth from an experimental field near Inner Mongolia Agriculture University Teaching farm. The experiment was conducted in a greenhouse with a day/night temperature of 25-30/15-20°C and a 14-h photoperiod using high pressure sodium lamps (400 W, "Philips"). The water stress treatments included: (1) no stress (control), i.e., 500 ml ofwater was added per pot to attain soil moisture content near 75-80% of saturated water content; (2) drought stress: watering with 20% PEG 6000 solution for 5 days after the appearance of the sixth leaf. The experiment was repeated three times.

Chlorophyll a fluorescence was measured on days 1, 3, and 5 during the drought treatment and days 1 and 2 after this period by means of a FMS2 pulse amplitude modulation fluorometer ("Hansatech", United Kingdom) following the procedure described by van Kooten and Snel [16]. The selected leaves were placed in darkness for 20 min before chlorophyll fluorescence was measured. The minimal fluorescence yield (F0) was obtained by application of a low-intensity red measuring light source, whereas maximal fluorescence values (Fm) were measured after applying a saturating light pulse (0.8 s) of 6000 ^mol photon/(m2 s). After dark measurements, the leaves were exposed to an actinic light. Steady-state Chl fluorescence (Fs) was achieved after exposure to the actinic light for 10 min. Saturating pulses (0.8 s) of white light (6000 ^mol photon/(m2 s)) were applied to determine maximum fluorescence in the light (F'm). The photochemical quenching (qP) and non-photochemical quenching (qN) were calculated according to the following equations:

Thus, the maximal quantum yield (quantum efficiency) of fluorescence (Fv/Fm) and effective quantum yield of PSII photochemistry (OPS2) were read with the FMS2 instrument. The PSII-driven electron transport rate, ETR, was determined according to [17]

and calculated as (1 - Fs/Fm) x 0.5 x PFD x leaf ab-sorbance, where 0.5 is a factor assuming an equal distribution of absorbed photons between PSII and PSI, and leaf absorbance was taken as 0.85. The leaf temperature during the measurements was kept at 25°C in a thermostated system. The CO2 concentration was 385-405 ^mol/mol and was monitored by a Ciras-1 infrared gas analyzer ("Hansatech"). The above parameters were measured six times.

RESULTS Effect of drought stress on F0 and F^/Fm

The variable fluorescence Fv is the difference between the maximal fluorescence from fully reduced PSII reaction center (Fm) and the intrinsic fluorescence (F0) from the antenna of fully oxidized PSII. The F0 remained constant without stress (fig. 1). However, under drought stress condition, F0 increased initially and then decreased. The F0 values in the two different sugar beet species were significantly different across daily measurements. In cv. HI0466, the F0 values under drought stress decreased significantly as compared with control in the early stage and increased slowly in the late stage, which indicates that the PSII reaction center was damaged to a lesser extent than in cv. NDTY4 where the F0 values declined and was very close to its initial values after rewatering. However, such recover was not evident for cv. NDTY4. These results appeared to suggest that there was potential damage to the PSII reaction center in this cultivar.

Effect of drought stress on qP and qN

The photochemical quenching (qP) is a measure of the proportion of energy absorbed by the PSII antenna pigments, which is used for photochemical reactions. In this context, qP also indicates the openness of the PSII reaction center [16]. The non-photochemical quenching (qN) indicates the proportion of energy, which was absorbed by the PSII antenna pigments, but dissipated as a heat. This mechanism is important to protect the plant [14]. Under drought stress, the qP decreased over time. The rate of decline was greater for cv. NDTY4 than for cv. HI0466 (fig. 2). At the end of the drought stress, the qP declined by 23.1 and 13.1% as compared to the respective values at the initiation of stress for cvs. NDTY4 and HI0466, respectively. This suggests that the degree of openness of the PSII reaction center in a drought-sensitive cultivar was lower than that for a drought-tolerant cultivar, which then decreased the rate of photosynthetic electron transfer. The qP of drought-stressed plants recovered to values similar to those of non drought-stressed plants within