научная статья по теме RESPONSES OF THE ANTIOXIDANT DEFENSE SYSTEM TO DROUGHT STRESS IN THE LEAVES OF FARGESIA DENUDATA SEEDLINGS, THE STAPLE FOOD OF THE GIANT PANDA Биология 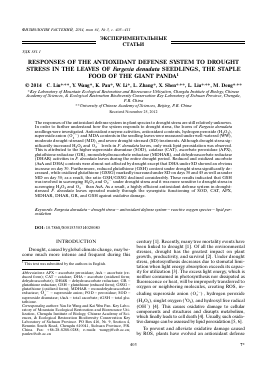 Текст научной статьи на тему «RESPONSES OF THE ANTIOXIDANT DEFENSE SYSTEM TO DROUGHT STRESS IN THE LEAVES OF FARGESIA DENUDATA SEEDLINGS, THE STAPLE FOOD OF THE GIANT PANDA»

RESPONSES OF THE ANTIOXIDANT DEFENSE SYSTEM TO DROUGHT STRESS IN THE LEAVES OF Fargesia denudata SEEDLINGS, THE STAPLE

The responses of the antioxidant defense system in plant species to drought stress are still relatively unknown. In order to further understand how the system responds to drought stress, the leaves of Fargesia denudata seedlings were investigated. Antioxidant enzyme activities, antioxidant contents, hydrogen peroxide (H2O2), superoxide anion (O2 ) and MDA contents in the seedling leaves were measured under well-watered (WW), moderate drought-stressed (MD), and severe drought-stressed (SD) treatments. Although drought stress significantly increased H2O2 and O2 levels in F. denudata leaves, only weak lipid peroxidation was observed. This is attributed to the higher superoxide dismutase (SOD), catalase (CAT), ascorbate peroxidase (APX), glutathione reductase (GR), monodehydroascorbate reductase (MDHAR), and dehydroascorbate reductase (DHAR) activities in F. denudata leaves during the entire drought period. Reduced and oxidized ascorbate (AsA and DHA) contents were almost not affected by drought except that DHA under SD showed an obvious increase on day 30. Furthermore, reduced glutathione (GSH) content under drought stress significantly decreased, while oxidized glutathione (GSSG) markedly increased under SD on days 30 and 45 as well as under MD on day 30; as a result, the ratio GSH/GSSG declined considerably. These results indicated that GSH was involved in scavenging H2O2 and O2 under drought stress and it was more sensitive to drought stress in scavenging H2O2 and O2 than AsA. As a result, a highly efficient antioxidant defense system in drought-stressed F. denudata leaves operated mainly through the synergistic functioning of SOD, CAT, APX, MDHAR, DHAR, GR, and GSH against oxidative damage.

Drought, caused by global climate change, may become much more intense and frequent during this

century [1]. Recently, many tree mortality events have been linked to drought [1]. Of all the environmental stresses, drought has the greatest impact on plant growth, productivity, and survival [2]. Under drought stress, photosynthesis decreases due to stomatal limitation when light energy absorption exceeds its capacity for utilization [3]. The excess light energy, which is neither consumed in photosynthesis nor dissipated as fluorescence or heat, will be improperly transferred to oxygen or neighboring molecules, creating ROS, including superoxide anion (O2 ), hydrogen peroxide (H2O2), singlet oxygen (1O2), and hydroxyl free radical (OH") [4]. This causes oxidative damage to cellular components and structures and disrupts metabolism, which finally leads to cell death [4]. Usually, such oxidative damage can be assessed by lipid peroxidation [5, 6].

To prevent and alleviate oxidative damage caused by ROS, plants have evolved an antioxidant defense

system for scavenging and detoxifying ROS. The system can be categorized as a combination of an enzymatic system, which includes catalase (CAT), peroxidase (POD), superoxide dismutase (SOD), ascorbate peroxidase (APX), glutathione reductase (GR), mon-odehydroascorbate reductase (MDHAR), and dehy-droascorbate reductase (DHAR), and a non-enzymatic system comprising ascorbate (AsA), glutathione (GSH), a-tocopherol, P-carotene, flavonoids, and hydroquinones [7]. APX, GR, MDHAR, DHAR, AsA, and GSH together constitute the ascorbate-glu-tathione (AsA-GSH) cycle. As a major component of antioxidant defense system, the AsA-GSH cycle can provide for efficient protection against ROS during the process of regenerating AsA and GSH through a series of cyclic reactions. Recently, researchers have established that the antioxidant defense system has a role in resisting drought stress [2, 6, 8]. Accordingly, extensive research was conducted into drought resistance and antioxidant defense system. However, little of this research was focused on wild plant species, such as Bam-busoideae plants. It tended to focus on crops, such as maize and legumes [9, 10]. Moreover, functioning component combinations of enzymatic and non-enzymatic antioxidant defense systems in seedling leaves to drought stress, as reported in many papers, are different, depending on plant species and cultivar studied and drought stress intensity and duration [6, 7]. Therefore, in order to develop drought-resistant and high-yielding wild plant species, the mechanistic relationships between drought and antioxidant defense system must be more fully understood.

Bambusoideae, an ecologically and economically important forest resource, covering more than 70 genera and 1000 species, is extensively distributed across tropical, subtropical, and temperate regions throughout the world. China is one of the world's main Bam-busoideae distribution and production regions with 39 genera and 500 species. Fargesia denudata, one of the staple foods of the giant panda, belongs to the Fargesia of Bambusoideae and grows only in mountainous ranges with altitudes between 1800 and 3400 m a.s.l. in Sichuan and Gansu provinces, western China [11]. It is an evergreen, shallow rooted plant and has a high water demand, which makes it very sensitive to drought. Accordingly, drought strongly impacts on the growth and development of F. denudata. For example, it leads to leaf loss, early flowering, and even death, thus resulting in a food shortage for the giant pandas, which seriously threatens their survival [11]. In recent years, although a large number of studies into Fargesia on aspects such as its biological and ecological properties [11], nutrient dynamics [12], photosynthesis and respiration [13], have been conducted, very few have paid attention to its protective mechanisms under drought and other stresses, especially to antioxidant defense mechanism.

Accumulation of available nutrients, for example, soluble sugar and protein in leaves can enhance plant

drought resistance [14]. Wang and Ma [11] reported that available nutrients in leaves of F. denudata were higher than in many other bamboo species, suggesting that it has a stronger drought resistance. In this context, it is also believed that a simultaneous increase in several components of the antioxidant defense system would be necessary for obtaining a rise in the plant protective capacity under drought conditions. Therefore, in this study, the activities of important antioxi-dant enzymes, the contents of some key antioxidants,

the levels of ROS (H2O2 and O2-), and the intensity of lipid peroxidation in F. denudata leaves were systematically investigated. The study would benefit us to understand the operating process of the antioxidant defense system against drought in the leaves of plant seedlings and also ensure to sustainably utilization of F. denudata for the survival of the giant panda in the face of increasingly frequent drought.

Plant materials, growth conditions, and stress treatments. The experiment was undertaken between April and October, 2011 in a greenhouse at Maoxian Ecological Station, Chinese Academy of Sciences (31°41'07" N, 103°53'58" E, 1860 m a.s.l.) in Sichuan Province, western China. Uniform and healthy two-year-old Fargesia denudata seedlings, obtained from the seedling nursery at Wanglang National Nature Reserve in Sichuan Province, western China (32°49' N, 103°55' E, 2300 m a.s.l.), were transplanted into 50-L plastic pots filled with 25 kg of homogenized topsoil from a field on the experimental site. Each pot had one seedling. The seedlings were irrigated regularly with water from a nearby stream. The temperature range was 18-31°C and the relative humidity range was 5580%.