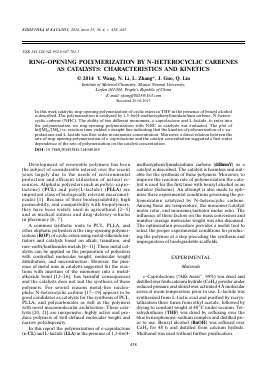 RING-OPENING POLYMERIZATION BY N-HETEROCYCLIC CARBENES AS CATALYSTS: CHARACTERISTICS AND KINETICS

Development of renewable polymers has been the subject of considerable interest over the recent years largely due to the needs of environmental protection and efficient utilization of natural resources. Aliphatic polyesters such as poly(s-capro-lactone) (PCL) and poly(L-lactide) (PLLA) are important class of biologically relevant macro molecules [1]. Because of their biodegradability, high permeability, and compatibility with biopolymers, they have been widely used in agricultural [2—5] and as medical sutures and drug-delivery vehicles in pharmacy [6, 7].

A common synthetic route to PCL, PLLA, and other aliphatic polyesters is the ring-opening polymerization (ROP) of cyclic esters using metal-alkoxide initiators and catalysts based on alkali, transition, and rare-earth/lanthanides metals [8—11]. These metal catalysts can be applied in the preparation of polyesters with controlled molecular weight, molecular weight distribution, and microstructure. However, the presence of metal ions in catalysts suggested for the reactions with insertion of the monomer into a metal-alkoxide bond [12—16], has harmful consequences and the catalysts does not suit the synthesis of these polymers. For several reasons metal-free nucleo-philic N-heterocyclic carbine [17—19] appears to be good candidates as catalysts for the synthesis of PCL, PLLA, and polycarbonates as well as the polymers with novel macromolecular architecture. These catalysts [20, 21] are inexpensive, highly active and produce polymers of well-defined molecular weight and narrow polydispersity.

In this report the polymerization of s-caprolactone (e-CL) and L-lactide (LLA) in the presence of!,3-te(4-

methoxyphenyl)imidazolium carbene (diBnimY) as a catalyst is described. The catalyst is harmless and suitable for the synthesis of these polymers. Moreover, to improve the reaction rate of polymerization the catalyst is used for the first time with benzyl alcohol as an initiator (Scheme). An attempt is also made to optimize three experimental conditions governing the polymerization catalyzed by N-heterocyclic carbene. Among these are temperature, the monomer/catalyst molar ratio, and monomer/initiator molar ratio. The influence of these factors on the mass conversion and number-average molecular weight was also discussed. The optimization procedure provides a useful tool to select the proper experimental conditions for producing the polymer at a step preceding the synthesis and impregnation of biodegradable scaffolds.

s-Caprolactone ("Alfa Aesar", 99%) was dried and distilled over fresh calcium hydride (CaH2) powder under reduced pressure and stored over activated 4 A molecular sieves at room temperature prior to use. L-lactide was synthesized from L-lactic acid and purified by recrys-tallization three times from ethyl acetate, followed by drying to constant weight at 40°C under vacuum. Tet-rahydrofuran (THF) was dried by refluxing over the blue benzophenone-sodium complex and distilled prior to use. Benzyl alcohol (BnOH) was refluxed over CaH2 for 48 h and distilled from calcium hydride. Methanol was used without further purification.

Catalyst preparation was carried out with a glass ampoule and vacuum-line technique under purfied nitrogen [22—25]. Anhydrous 1,3-bis(4-methoxyphe-nyl)imidazolium hexafluorophosphate and equiv. of sodium hydride were combined in dry THF. After a reaction time of 30 min the reaction mixture was filtered.

Polymerization was carried out in previously flamed and nitrogen-purged glass ampoules. Monomer, solvent, an initiator and catalyst were injected into the ampoules with syringes successively. Then these ampoules were placed in a thermostat for a definite time needed for polymerization. The reaction mixture was quenched with a drop of methanol. The polymer was precipitated from cold methanol, and then dried to constant weight under vacuum at 40°C.

The *H NMR was recorded in either CDCl3 or DMSO-d 6 on a Bruker AV-600 MHz spectrometer with the tetramethylsilane (TMS) as an internal standard. Differential scanning calorimetric (DSC) curves were taken on a DSC (204 F1) instrument in the temperature range from —60 to 150°C with a heating rate of10°C/min under nitrogen, the midpoint of the heat capacity change was taken as the glass transition temperature (Tg). The number-average molecular weight (Mn) and polydispersity (PDI) measurements were made with THF as an eluent (1 mL/min) at 40 °C by the gel permeation chromatography (PL-GPC220) with refractive index detector and a set of columns (PL gel 10 |im MIXED-B 300 mm x 7.5 mm, PL gel 10 |m Guard 50 mm x 7.5 mm) and calibrated using polysty-

Characteristics of the polymerization

The data in Table 1 show that the diBnimY indicated in Scheme is a very effective catalyst for the controlled ROP of LLA. High molecular weight PLLA was readily synthesized within 60 min at 15°C. However, higher monomer concentration/initiator molar ratios ([M]/[I]) resulted in polymer polydispersities greater than 1.3. Since LLA and s-CL undergo similar ROP processes via a monomer-activated mechanism [26—30], it is useful to examine the efficiency of the carbene catalyst to catalyze the ROP of s-CL.

Table 1. Production of PLLA by the ring-opening polymerization of LLA in THF at 15°C*

Table 2. Production of PCL by the ring-opening polymerization of s-CL in THF at 15°C*