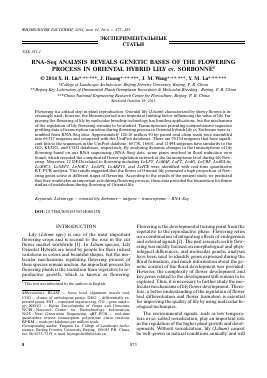 Flowering is a critical step in plant reproduction. Oriental lily (Lilium) characterized by showy flowers is increasingly used; however, the blossom period is an important limiting factor influencing the value of lily. Improving the flowering of lily by molecular breeding technology has limitless applications, but the mechanism of the regulation of lily flowering remains to be studied. Transcriptomes providing comprehensive sequence profiling data of transcription variation during flowering process in Oriental hybrids lily cv. Sorbonne were assembled from RNA-Seq data. Approximately 124.16 million 90 bp paired-end clean reads were assembled into 66 327 unigenes and compared with the UniProt databases. There are 30254 unigenes that have significant hits to the sequences in the UniProt database, 60738, 16601, and 12494 unigenes have similarity to the GO, KEGG, and COG databases, respectively. By analyzing dynamic changes in the transcriptome of lily flowering based on our RNA sequencing (RNA-Seq) data, some genes involved in floral induction were found, which revealed the complicated flower regulation network at the transcriptome level during lily flowering. Moreover, 12 DEGs related to flowering including LoLFY, LoMAF, LoFT, LoAG, LoCBF, LoAGL6a, LoSOC1, LoSEP1, LoNAC1, LoAPX, LoARF10, and LolCE were identified with real-time quantitative RT-PCR analysis. The results suggested that the flower of Oriental lily possessed a high proportion of flowering genes active at different stages of flowering. According to the results of the present study, we predicted that they would play an important role during flowering process; these data provided the foundation for future studies of metabolism during flowering of Oriental lily.

Lily (Lilium spp.) is one of the most important flowering crops and is second to the rose in the cut flower market worldwide [1]. In Lilium species, Lily Oriental Hybrids are loved by people for their richest variations in colors and beautiful shapes, but the molecular mechanisms regulating flowering process of these species remain unclear. An important process for flowering plants is the transition from vegetative to reproductive growth, which is known as flowering.

Flowering is the developmental turning point from the vegetative to the reproductive phase. Flowering relies on a combination of integrating effects of endogenous and external signals [2]. The past research on lily flowering was mostly focused on morphological and physiological differences, and molecular genetic analyses have been used to identify genes expressed during the floral formation, and much information about the genetic control of the floral development was provided. However, the complexity of flower development and key genes related to the development still remain to be explored. Thus, it is necessary to further study the molecular mechanisms oflily flower development. Therefore, a better understanding of the regulation of flower bud differentiation and flower formation is essential for improving the quality of lily by using molecular biological techniques.

The environmental signals, such as low temperature or so-called vernalization, play an important role in the regulation of the higher plant growth and developments. Without vernalization, lily (Lilium) cannot be well-grown in natural conditions annually, and will

show not-germination or blind flower phenomenon. Vernalization is a critical developmental process that allows plants to flower or germinate by exposing to cold temperatures. Currently, studies on genes related to flowering induction and flower morphogenesis have been mainly carried out for annual plants or model plants, such as rice, Arabidopsis, maize, and wheat [3]. Oriental lily was widely cultivated around the world in recent years. Although there were some studies on the flower bud differentiation process, studies on genes related to the flowering of lily are rare, mostly because of the large genome oflily and the inefficient transformation system. Only some genes related to lily flower were found, such as LMADS1 [4], LMADS2 [5], LMADS3, LMADS4 [6], LRDEF, LRGLOA, and LRGLOB from Lilium regale [7].

As a powerful modern genetic research tool, tran-scriptome sequencing has been used to analyze plenty of species, e.g., Eichhornia paniculata [8], alfalfa (Medicago sativa) [9], and tea (Camellia sinensis) [10], but transcriptome and genomic information for lily are currently unavailable. Transcriptome and expression profiling data for this species would be needed as an important resource to identify genes and to better understand the biological mechanisms of lily flowering.

Here, we used Illumina sequencing to analyze the global transcriptome alterations at different stages of the lily shoot apical meristem. This approach has allowed us to reveal the dynamic changes in the key transcriptional and development networks during the distinct stages of the flowering process, and these results provide an insight into the molecular basis underlying the physiological and anatomical changes in lily flower bud differentiation. Furthermore, this study provides the first insights into how the apex development is related to vernalization and how vernalization genes are regulated in spring growth of lily. To the best of our knowledge, this study is the first to characterize the transcriptome dynamics of lily by using RNA-Seq, which may serve as a gene expression profile blueprint for flowering induction and flower morphogenesis mechanism of lily.

cDNA library preparation and transcriptome sequencing. Sequencing using the Illumina HiSeq™ 2000 was performed at the Shanghai Biotechnology Corporation (www.ebioservice.com) according to the manufacturer's instructions ("Illumina", United States). Briefly, magnetic beads with oligo(dT) were utilized to isolate poly(A) mRNA following collection of RNA from lily shoot tip. A fragmentation buffer was added to break the mRNA into short fragments. Using these short fragments as templates, a random hexamer primer was used to synthesize first-strand cDNA. Second-strand cDNA was synthesized using buffers, dNTPs, RNase H, and DNA polymerase I. Short fragments were purified with a QiaQuick PCR extraction kit ("Qiagen") and a single A was added to cDNA fragments following end-repair. Thereafter, the short fragments were connected with sequencing adapters. Then, the DNA fragments were detected through agarose gel electrophoresis and purified with a QIAquick gel extraction kit ("Qiagen"). Finally, the library was sequenced using an Illumina HiSeqTM 2000.

Analysis of Illumina transcriptome sequencing results. De novo assembly was carried out using SOAPde-novo-Trans (v. 1.04; http://soap.genomics.org.cn/ soapdenovo.html) with the default parameters, except for the K-mer value [11]. After assessing different K-mer sizes, 29-mer yielded the best assembly for the desired application and