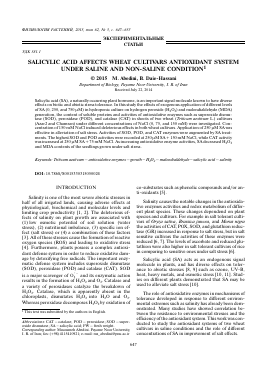 Salicylic acid (SA), a naturally occurring plant hormone, is an important signal molecule known to have diverse effects on biotic and abiotic stress tolerance. In this study the effects of exogenous application of different levels of SA (0, 250, and 750 цМ) in hydroponic culture on hydrogen peroxide (H2O2) and malondialdehyde (MDA) generation, the content of soluble proteins and activities of antioxidative enzymes such as superoxide dismu-tase (SOD), peroxidase (POD), and catalase (CAT) in shoots of two wheat (Triticum aestivum L.) cultivars (Azar2 and Chamran) under different concentrations of NaCl (0, 75, and 150 mM) were investigated. Concentration of150 mM NaCl induced deleterious effects in both wheat cultivars. Application of250 цМ SA was effective in alleviation of salt stress. Activities of SOD, POD, and CAT enzymes were augmented by SA treatments. The highest SOD and POD activities were recorded at 250 цМ SA + 150 mM NaCl, while CAT activity was increased at 250 цM SA + 75 mM NaCl. As increasing antioxidative enzyme activities, SA decreased H2O2 and MDA contents of the seedlings grown under salt stress.

Salinity is one of the most severe abiotic stresses in half of all irrigated lands, causing adverse effects at physiological, biochemical and molecular levels and limiting crop productivity [1, 2]. The deleterious effects of salinity on plant growth are associated with (1) low osmotic potential of soil solution (water stress), (2) nutritional imbalance, (3) specific ion effect (salt stress) or (4) a combination of these factors

[3]. All of these stresses cause the formation of reactive oxygen species (ROS) and leading to oxidative stress

is a major scavenger of O2- and its enzymatic action results in the formation of H2O2 and O2. Catalase and a variety of peroxidases catalyze the breakdown of H2O2. Catalase, which is apparently absent in the chloroplasts, dismutates H2O2 into H2O and O2. Whereas peroxidase decomposes H2O2 by oxidation of

This text was submitted by the authors in English.

co-substrates such as phenolic compounds and/or antioxidants [5].

Salinity causes the notable changes in the antioxidative enzymes activities and redox metabolism of different plant species. These changes dependend on plant species and cultivars. For example in salt tolerant cultivars of Oryza sativa, Brassica juncea, and Morus nigra the activities of CAT, POX, SOD, and glutathion reductase (GR) increased in response to salt stress, but in salt sensitive cultivars the activities of these enzymes were reduced [6, 7]. The levels of ascorbate and reduced glutathion were also higher in salt tolerant cultivars of rice in comparing to sensitive ones under salt stress [6].

Salicylic acid (SA) acts as an endogenous signal molecule in plants, and has diverse effects on tolerance to abiotic stresses [8, 9] such as ozone, UV-B, heat, heavy metals, and osmotic stress [10, 11]. Studies on different plants demonstrated that SA may be used to alleviate salt stress [10].

The role of antioxidative enzymes in mechanisms of tolerance developed in response to different environmental extremes such as salinity has already been demonstrated. Many studies have showed correlation between the resistance to environmental stresses and the efficiency of the antioxidant system. This work was conducted to study the antioxidant systems of two wheat cultivars in saline conditions and the role of different concentrations of SA in improvement of salt effects.

Growth conditions. All experiments were conducted hydroponically in a growth chamber with a temperature regime of 28/20°C (day/night), 16/8 h (light/dark) period and relative humidity of 70%. Seeds were germinated in Petri dishes and transferred to plastic containers with 2 L of nutrient solution (50%) and pre-cultured for 5 days. 10-day-old plants were transferred to the full strength nutrient solution, containing 0 (control), 75, and 150 mM NaCl and three levels of SA including 0 (control), 250 ^M (an appropriate concentration according to previous studies), and 750 ^M (relatively high concentration). After 21 days of treatment, the plants were used for further analyses.

Enzyme assays. Fresh leaf samples were used for enzymes extraction and determination of protein and metabolites. Leaf samples were ground at 4°C in extraction buffer. Each enzyme assays were tested for linearity between the volume of crude extract and the measured activity. Changes in the absorbance of substrates or products were measured using spectropho-tometer (Specord 200, "Analytic Jena", Germany).

Peroxidase (POD, EC 1.11.1.7) activity was determined using the guaiacol test [13, 14]. The enzyme was extracted by 10 mM phosphate buffer (pH 7.0) and assayed in solution contained 10 mM phosphate buffer, 5 mM H2O2, and 4 mM guaiacol. The reaction was started by addition of the enzyme extract at 25 °C and was followed 2 min photometrically at 470 nm. The enzyme activity unit was calculated as amount of protein required for the formation of1 ^M tetraguaia-col for 1 min.

tained 50 mM phosphate buffer and 10 mM H2O2. The reaction was started by addition of enzyme aliquot to the reaction mixture and the changes in absorbance were monitored for 2 min. Unit activity was taken as amount of enzyme, which decomposes 1 M of H2O2 in 1 min.

Other assays. Soluble proteins were determined as described by Bradford [15] using a commercial reagent and BSA as a standard.

The hydrogen peroxide content was estimated according to Harinasut et al. [7]. Samples were homogenized with 0.1% (w/v) trichloroacetic acid (TCA). Mixture was centrifuged at 12 000 g for 15 min. To 0.5 mL of the supernatant, 0.5 mL of 10 mM phosphate buffer (pH 7.0) and 1 mL of 1 M potassium iodide (KI) was added. The mixture was incubated at 25°C for 15 min. The absorbance was measured at 390 nm. H2O2 content was calculated from a standard curve prepared in a similar way.

Lipid peroxidation was estimated from the amount of malondialdehyde (MDA) formed in a reaction mixture [16]. Leaf tissues were homogenized in 0.1% (w/v) (TCA). The homogenate was centrifuged at 10 000 g for 5 min. To 1 mL of the supernatant, 4 mL of 20% TCA containing 0.5% thiobarbituric acid was added. The mixture was incubated at 95°C in water bath for 30 min, and then quickly cooled on ice. The mixture was centrifuged at 10 000 g for 15 min and the absorbance was measured at 532 nm. MDA levels were calculated from 1,1',3,3'-tetraethoxypropan standard curve.

All chemicals and reagents used in this experiment were purchased from "Sigma Aldrich" (Germany), "Fluka" (Germany) and "Merck" (Germany).

Salt stress (p < 0.05) significantly decreased fresh and dry weights of shoots in both cultivars at 150 mM NaCl. In non-saline conditions SA application had no significant effects on these parameters. Application of 250 ^M SA for 75 mM NaCl-treated plants had no significant effects but improved the parameters in 150 mM NaCl-treated plants of both cul-tivars. Seedlings of both cultivars died at 750 ^M SA + + 150 mM NaCl, while application of 750 ^M SA with 75 mM NaCl decreased the fresh and dry weights of shoots slightly in Azar2 but significantly in Cham-ran (table).

The activities of antioxidative enzymes, SOD and POD, significantly increased (p < 0.05) in both cultivars due to salt stress. Application of 75 mM NaCl increased SOD and POD activities in shoots by 140 and