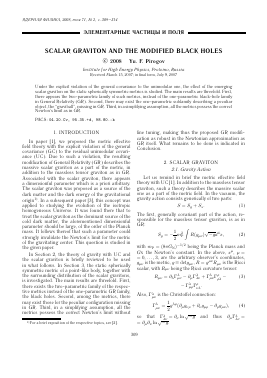 Under the explicit violation of the general covariance to the unimodular one, the effect of the emerging scalar graviton on the static spherically symmetric metrics is studied. The main results are threefold. First, there appears the two-parametric family of such metrics, instead of the one-parametric black-hole family in General Relativity (GR). Second, there may exist the one-parametric subfamily describing a peculiar object, the "graviball", missing in GR. Third, in a simplifying assumption, all the metrics possess the correct Newton's limit as in GR.

In paper [1], we proposed the metric effective field theory with the explicit violation of the general covariance (GC) to the residual unimodular covari-ance (UC). Due to such a violation, the resulting modification of General Relativity (GR) describes the massive scalar graviton as a part of the metric, in addition to the massless tensor graviton as in GR. Associated with the scalar graviton, there appears a dimensionful parameter which is a priori arbitrary. The scalar graviton was proposed as a source of the dark matter and the dark energy of the gravitational origin1). In a subsequent paper [3], this concept was applied to studying the evolution of the isotropic homogeneous Universe. It was found there that to treat the scalar graviton as the dominant source of the cold dark matter, the aforementioned dimensionful parameter should be large, of the order of the Planck mass. It follows thereof that such a parameter could strongly invalidate the Newton's limit for the metric of the gravitating center. This question is studied in the given paper.

In Section 2, the theory of gravity with UC and the scalar graviton is briefly reviewed to be used in what follows. In Section 3, the static spherically symmetric metric of a point-like body, together with the surrounding distribution of the scalar gravitons, is investigated. The main results are threefold. First, there exists the two-parametric family of the respective metrics instead of the one-parametric GR family, the black holes. Second, among the metrics, there may exist those for the peculiar configuration missing in GR. Third, in a simplifying assumption, all the metrics possess the correct Newton's limit without

fine tuning, making thus the proposed GR modification as robust in the Newtonian approximation as GR itself. What remains to be done is indicated in Conclusion.

Let us remind in brief the metric effective field theory with UC [1]. In addition to the massless tensor graviton, such a theory describes the massive scalar one as a part of the metric field. In the vacuum, the gravity action consists generically of two parts:

The first, generally covariant part of the action, responsible for the massless tensor graviton, is as in GR:

1)For a brief exposition of the respective topics, see [2].

Also, r^ is the Christoffel connection:

The second part of the gravity action, describing the massive scalar graviton, looks in the lowest derivative order as

with g being a nondynamical scalar density of the same weight as the scalar density g. Such an object is necessary to build the scalar out of g. Knowing g in the observer's coordinates, one can always rescale the latter ones locally, so that g = —1. On the other hand, the observer's coordinates being fixed, changing g by a multiplicative constant results in shifting a by an additive constant. In Eq. (5), fs is a constant with the dimension of mass. A priori, one expects fs < O(mP). Vs is a potential producing the mass for the scalar graviton. By the symmetry reasons, the potential is supposed to be suppressed.

Equation (5) violates GC, still preserving UC. In particular, this insures that the causality is not violated. Such a modified GR is the bona fide quantum field theory, as robust theoretically as GR itself [2]. Nevertheless, there being no smooth restoration of GR at the quantum level, the proposed GR modification is in fact an independent theory, which is to be verified experimentally.

Varying the gravity action with respect to g^v, g being fixed, one arrives at the modified gravity equation in the vacuum:

is to be treated as the metric energy—momentum tensor of the scalar graviton. In the above

the total energy—momentum of the ordinary matter, omitted in Eq. (1), and the scalar graviton satisfies

The modified pure gravity equation (7) can otherwise be written as

where Ts = g^vTtv is as follows:

with R = —Ts/mp generally nonzero. Explicitly, one gets

Under the violation of GC, to really start up the theory one should choose the particular coordinates, where g is to be defined. There is a natural choice. Namely, according to the present-day cosmological paradigm, our Universe is spatially flat, fairly homogeneous, and isotropic. Thus, given a point P, the observer can adjust the coordinates in the Universe so that the metric around the point at the astronomical scales, much less than the cosmological ones, may be put to the Minkowskian form, g^v = . Call these coordinates the comoving ones. In the comoving coordinates, the nondynamical variable g, characterizing the Universe as a whole, is to vary at the cosmological scales as the Universe itself. So, g can be treated in the given approximation as a constant, too. After the theory starts up in the comoving coordinates, it can be rewritten in the arbitrary observer's coordinates.

Now, let in the point P there be placed the isolated point-like body which is in the rest relative to the close ambient. The body is assumed to have no angular momentum and other physical attributes, but the mass m. Such a body disturbs the Universe metric in a vicinity of the point, not violating the spherical symmetry. The interval corresponding to the static spherically symmetric metric around such a body can be chosen in the comoving coordinates most generally as follows:

with the inverse metric

The rest of the metric elements is zero. Rotating the spacial coordinates so that in the point x there takes place n = (1,0,0), one brings the metric in this point to the diagonal form (g^v) = diag(a, -b, -c, -c). Thus, generally, the metric is anisotropic. For the isotropy, there should be fulfilled c = b. In general, one has g = -abc2 and thus

One can change the original comoving coordinates xm to the polar comoving ones (r, 9, p), so that the interval becomes

with a unit of length being tacitly understood, where it is necessary. One has now g = -abc2r4 sin2 9, with a looking nevertheless the same as in Eq. (18) due to the compensating transformation of g.

Having defined the theory in the comoving coordinates, one can choose, not violating the spherical symmetry, the new radial coordinate r = r(r), with the metric variables becoming as follows:

A priori, all the choices of r are equivalent under the reversibility. Due to this, by imposing a restriction on c one can bring the metric to the form most appropriate for the particular purposes. At that, the role of the third independent dynamical variable instead of c is played by the scalar field a(r ). The latter becomes a kind of a hidden variable in the absence of the direct interactions of the scalar graviton with the ordinary matter.

For example, imposing the relation c = b by choosing r through

one brings the interval to the isotropic form