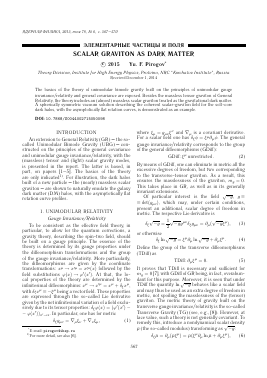 The basics of the theory of unimodular bimode gravity built on the principles of unimodular gauge invariance/relativity and general covariance are exposed. Besides the massless tensor graviton of General Relativity, the theory includes an (almost) massless scalar graviton treated as the gravitational dark matter. A spherically symmetric vacuum solution describing the coherent scalar-graviton field for the soft-core dark halos, with the asymptotically flat rotation curves, is demonstrated as an example.

An extension to General Relativity (GR) — the so-called Unimodular Bimode Gravity (UBG) — constructed on the principles of the general covariance and unimodular gauge invariance/relativity, with the (massless) tensor and (light) scalar gravity modes, is presented in the report. The latter is based, in part, on papers [1—5]. The basics of the theory are only indicated1). For illustration, the dark halos built of a new particle — the (nearly) massless scalar graviton — are shown to naturally emulate the galaxy dark matter (DM) halos, with the asymptotically flat rotation curve profiles.

To be consistent as the effective field theory, in particular, to allow for the quantum corrections, a gravity theory, describing the spin-two field, should be built on a gauge principle. The essence of the theory is determined by its gauge properties under the diffeomorphism transformations and the group of the gauge invariance/relativity. More particularly, the diffeomorphisms are given by the coordinate transformations: x^ ^ x'^ = x'^(x) followed by the field substitutions ^(x) ^ p'(x'). At that, the local properties of the theory are determined by the infinitesimal diffeomorphims: x^ ^ x'^ = x^ + 5%xM, with 5%x^ = being a vector field. These properties are expressed through the so-called Lie derivative given by the net infinitesimal variation of a field exclu-sivelydueto its tensor properties: 5%p(x) = (p'(x') — — x'))x>^x. In particular, one has for metric

where ^ = g^vZv and V^ is a covariant derivative. For a scalar field one has 5%0 = The general

gauge invariance/relativity corresponds to the group of the general diffeomorphisms (GDiff):

By means of GDiff, one can eliminate in metric all the excessive degrees of freedom, but two corresponding to the transverse-tensor graviton. As a result, this ensures the masslessness of the graviton, mg = 0. This takes place in GR, as well as in its generally invariant extensions.

Of particular interest is the field yf^^g, g = = det(g^v), which may, under certain conditions, present an additional, scalar degree of freedom in metric. The respective Lie derivative is

Define the group of the transverse diffeomorphisms (TDiff) as

It proves that TDiff is necessary and sufficient for mg = 0 [7], with GDiff of GR being, in fact, overabundant for this purpose. Moreover, it is seen that under TDiff the quantity In y/^g behaves like a scalar field and may thus be used as an extra degree of freedom in metric, not spoiling the masslessness of the (tensor) graviton. The metric theory of gravity built on the transverse gauge invariance/relativity is the so-called Transverse Gravity (TG) (see, e.g., [8]). However, at face value, such a theory is not generally covariant. To remedy this, introduce a nondynamical scalar density p. (the so-called modulus) transforming as g:

so that ^ = ln(y/=g/p.) behaves like a scalar field under GDiff, and may thus be used as a field variable in a generally covariant theory, in distinction from In yf^g alone. Define then the group of the uni-modular diffeomorphisms (UDiff) as preserving the modulus:

Generically, a theory of gravity built on the uni-modular invariance/relativity will be termed Unimod-ular Gravity (UG). Being generally covariant, UG is equivalent to the non-generally covariant TG in coordinates where p = 1 (if any). But now, due to the general covariance, one can study the theory in arbitrary observer's coordinates.

with L being the scalar Lagrangian. The UG field equations (FEs) in vacuum are obtained by extrem-izing S under 5jj = 0, with the result

and p appearing as an external functional parameter. Ultimately, this signifies an "openness" of the system of fields considered and may, conceivably, serve as an off-spring of a "new physics". Some particular cases of UG are as follows.

The marginal case with the absence of p corresponds to GR:

where h/2 = ln p (not necessarily small). This means that h and h could separately be eliminated by means of GDiff. Nevertheless, ^ = (h — h)/2 transforming homogeneously as a scalar field cannot be removed and may thus serve as an independent degree of freedom. With the rest of components in h^v transforming under GDiff exactly as in GR, the physi-cal/helicity content of UG thus includes:

The bimode gravity mediated by the systolon and graviton may naturally be referred to as the systo-gravity.

To be precise, under UG we understand collectively a generally covariant and unimodular invariant metric theory of gravity containing a nondynamical scalar density (modulus) p. For general covariance, p may enter only through p/^T^g. The UG action in the vacuum looks generically like:

where Kg is the Planck mass and A is a cosmological constant. The GR vacuum corresponds thus to R = = 4A.

The restriction yf^/p = 1 corresponds to the so-called Unimodular Relativity (UR) [9]:

so that R remains undetermined by FEs. The Bianchi identity gives additionally dR = 0. Henceforth, the UR vacuum corresponds to R = 4A0, with A0 being an integration constant, reproducing effectively the Lagrangian A term. Thus, UR is classically equivalent to GR with a cosmological constant.

In addition to the massless transverse-tensor graviton, UBG/systo-gravity describes the (nearly) mass-less scalar graviton/systolon ç, characterized by the

gravity Lagrangian is unique because:

where a = ksq. The non-harmonic term ksV ■ Va is specific to UBG/systo-gravity and may serve as a signature of the latter, being absent in other gravity theories such as, e.g.:

GR with a free massless scalar field; the free Brans—Dicke theory in Einstein frame. In essence, such a term, ensuring a peculiar dark halo solution, is in charge for treating the systolon as a DM particle.

In the case V ■ Va = 0, the UBG/systo-gravity FEs are similar to those of GR with a free massless

2)The potential Vs(<;) weakly violating the global symmetry could produce, in particular, a mass for ?.

Fig. 1. Dark halo solution çh(T), vs. the scaled radial distance t = r/Ro. The bold solid line — a numerical solution, the dashed line — the analytic approximation. The thin solid line — an exceptional solution. The same is adopted in other figures.

the higher derivative terms with ç are suppressed by the powers of 1/ks;

the derivativeless terms with ç are forbidden under the global symmetry ç ^ ç + ç02). The FEs for UBG/systo-gravity are

the black holes: no scalar field;

the vacuum holes: no ordinary matter3).

In the case V • Vo = 0, there appears a principally new spherically symmetric regular solution to the vacuum FEs. It looks approximately like (see Fig. 1):

where t = r/R0 is the scaled radial distance, with an integration constant R0. This solution describes the dark halos, with the various R0 giving the characteristic distance scales. The energy density profile of the dark halo is as follows (see Fig. 2):

with the central energy density p0 = 3k2s/Rq. This profile lies somewhere in between the two commonly accepted Monte-Carlo cases: