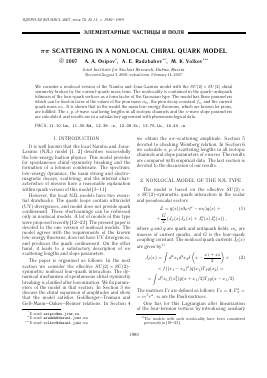 We consider a nonlocal version of the Nambu and Jona-Lasinio model with the SU(2) x SU(2) chiral symmetry broken by the current-quark-mass term. The nonlocality is contained in the quark—antiquark bilinears of the four-quark vertices as a form factor of the Gaussian type. The model has three parameters which can be fixed in favor of the values of the pion mass mn, the pion decay constant fn, and the current quark mass mc. It is shown that in the model the main low-energy theorems, which are known for pions, are fulfilled. The s, p, d-wave scattering lengths in all isotopic channels and the s-wave slope parameters are calculated, and results are in a satisfactory agreement with phenomenological data.

It is well known that the local Nambu and Jona-Lasinio (NJL) model [1, 2] describes successfully the low-energy hadron physics. This model provides for spontaneous chiral-symmetry breaking and the formation of a fermion condensate. The spectrum, low-energy dynamics, the main strong and electromagnetic decays, scattering, and the internal characteristics of mesons have a reasonable explanation within quark version of this model [3—11].

However, the local NJL models have two essential drawbacks. The quark loops contain ultraviolet (UV) divergences, and model does not provide quark confinement. These shortcomings can be redressed only in nonlocal models. A lot of models of this type were proposed recently [12—23]. The present paper is devoted to the one version of nonlocal models. The model agrees with the requirements of the known low-energy theorems, does not have UV divergences, and produces the quark confinement. On the other hand, it leads to a satisfactory description of nn scattering lengths and slope parameters.

The paper is organized as follows. In the next section we consider the effective SU(2) x SU(2)-symmetric nonlocal four-quark interaction. The dynamical mechanism of spontaneous chiral-symmetry breaking is clarified after bosonization. We fix parameters of the model in that section. In Section 3 we discuss the chiral expansion of amplitudes and show that the model satisfies Goldberger—Treiman and Gell-Mann—Oakes—Renner relations. In Section 4

we obtain the ---scattering amplitude. Section 5 devoted to checking Weinberg relation. In Section 6 we calculate s, p, d scattering lengths in all isotopic channels and slope parameters of s waves. The results are compared with empirical data. The last section is devoted to the discussion of our results.

2. NONLOCAL MODEL OF THE NJL TYPE

where q and g are quark and antiquark fields, mc are masses of current quarks, and G is the four-quark coupling constant. The nonlocal quark currents JI(x) are given by1)

!)The models with such nonlocality have been considered previously in [19—23].

Note that p = p^. The quark loop integral (5) is finite due to the regularizing form factor f (k2).

Since Lagrangian (3) contains the couplings between auxiliary fields and quarks, one expects to get mesons as bound quark—antiquark pairs, considering the simple ladder approximation. The variables corresponding to the bound physical states nah, aph are defined as follows:

The self-energies of the physical fields, being expanded around their masses man, have a standard form

The couplings gn(ml) and ga (ml) are uniquely determined by this expansion. One can find that they are

This function is almost completely determined by the form factor f (p2). For the sake of simplicity we choose f (p2) as a Gaussian exponent in Euclidean domain p2 ^ -l2, where is the Wick rotated momentum variable (l2 > 0). The function f (-l2) = = exp(-l2/A2) has damping behavior at large l2; A describes the effective size of the nonlocal interactions. The larger A, the less the effective range of nonlocality; the limit A ^^ transforms the theory to the local one. The unknown constant mq is a dimensionfull parameter which plays the role of the constituent quark mass. The self-consistent equation for the dynamical quark mass is known as the "gap" equation:

where Nf and Nc are the numbers of quark flavors and colors, respectively. The trace refers to spin variables of the quark propagator

Here, nann (p2) are the contributions of the quark one-loop diagrams:

The trace refers to both spin and isospin variables, k± = k ± p/2. Integrals over components of momenta are written in Minkowski space with a timelike metric, but when we integrate over invariants, we make a Wick rotation to Euclidean space. The basic details of such procedure will be explained in the end of this section.

The propagators of the meson fields are

The meson masses ma,n are the poles of the propagators, i.e., solutions of the following equations:

Quark propagators (6) have complex conjugated poles at chosen values of model parameters. Such structure of the quark propagator occurs frequently in the nonlocal NJL models and simulates quark confinement [13, 18, 25]. Namely, quark loop integrals do not have cuts connected with the quark—antiquark-pair creation.

The evaluation of loop integrals with momentum-dependent quark mass needs proper analytical continuation from Minkowski space to Euclidean one (where form factors are well-defined decreasing functions). Although this continuation may be nontrivial

(see, e.g., [13, 18, 25]), the low-energy region which we are interested in is free from the obstacles of analytical continuation. All integrals can easily be calculated numerically or by constructing a series expansion over external momenta. This series is rapidly convergent in the low-energy region. In order to illustrate this, let us retain two, three, or four terms in the momentum expansion of n(p2) and nn(p2). As a result, the values of a-meson mass are 611, 599, and 595 MeV. For the pion the situation is much better, here we obtain 140.02, 140, and 140 MeV, correspondingly.

3. CHIRAL EXPANSION, GOLDBERGER-TREIMAN RELATION, AND ALL THAT

At low energies the behavior of scattering or decay pion amplitudes can be described in terms of Taylor expansion in momenta and current quark masses. Equations (4) and (5) yield the first relations following from such an approximation. Let us start from the chiral expansion of the constituent quark mass

Here, M(p2) = Mq/(p2) is the momentum-dependent quark mass in the chiral limit.

Substituting this expansion in the gap equation (5) and extracting the terms up to and including the first order in mc, one obtains two equations:

they do not depend on external momenta. We always assume this analytical continuation as a definition of integrals if they are written in Minkowski space, like, for instance, ones given in Eqs. (15) or (16).

We now proceed to set up the main results of pion physics which follow from the equations of Section 2 in the chiral limit. To find the coupling fn, one should calculate the amplitude of the pion weak decay (p) = i'P^fn. The detailed description of insertion of electroweak fields into nonlocal Lagrangian is given in Appendix. Such evaluation shows that f n in the chiral limit, fn\mc=o = Fn, is given by the formula first suggested by Pagels and Stokar in [26]:

The leading term of the chiral expansion for the pion—quark—antiquark coupling g-2(m"n) (see Eq. (9)) is