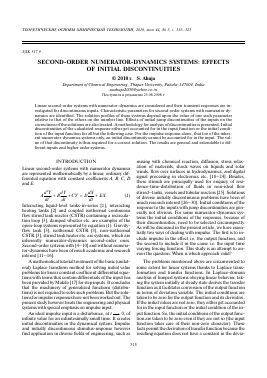 Linear second-order systems with numerator-dynamics are considered and their transient responses are investigated for discontinuous inputs. Characteristic parameters for second-order systems with numerator dynamics are identified. The solution profiles of these systems depend upon the value of one such parameter relative to that of the others on the number line. Effects of initial jump discontinuities of the inputs on the correctness of the solutions are also treated. A methodology for analysis of discontinuities is presented. Initial discontinuities of the calculated response either get accounted for in the input function or the initial condition of the input function for all but the following case. For the impulse response alone, that too of the inherent numerator-dynamics systems only, an initial discontinuity cannot be accounted for in the input. The value of that discontinuity is thus required for a correct solution. The results are general and extendable to different inputs and higher order systems.

Linear second-order systems with numerator dynamics are represented mathematically by a linear, ordinary differential equation with constant coefficients A, B, C, D and E:

A mathematical tutorial treatment ofthe basic (unilateral) Laplace transform method for solving initial value problems for linear constant coefficient differential equations with terms that contain differentials of the input has been provided by Makila [17] for step inputs. It concludes that the machinery of generalized functions (distributions) is not required to solve such problems. But the solutions for impulse responses have not been worked out. The present study however treats the engineering and physical systems with special emphasis on impulse input.

An ideal impulse input is a disturbance, at t —0, of infinite value for an infinitesimally small time. It creates initial discontinuities in the dynamical system. Impulse and initially discontinuous stimulus-response however find application in diverse fields of engineering, such as

mixing with chemical reaction, diffusion, stress relaxation of materials, shock waves on liquids and solar winds, flow over surfaces in hydrodynamics, and digital signal processing in electronics etc. [18—24]. Besides, these stimuli are principally used for enquiry of residence-time-distribution of fluids in non-ideal flow stirred—tanks, vessels and tubular reactors [25]. Solutions of diverse initially discontinuous problems have been of much research interest [26—30]. Initial conditions of the response to the inputs with jump discontinuities are generally not obvious. For some numerator-dynamics systems the initial conditions of the responses, because of their discontinuities, need to be selected circumspectly. As will be discussed in the present article, we have essentially two ways of dealing with impulse. The first is to include impulse in the effect i.e. the output function, and the second to include it in the cause i.e. the input time varying forcing function. This study is an attempt to answer the question: When is which approach valid?

tion form. The transfer function approach, in effect, corresponds to the second one of the two mentioned above.

Numerator-dynamics systems thus are the systems which contain a variable term in the numerator of the transfer function with the degree of numerator less than or equal to that of the denominator. In this paper, negative real part poles (i.e. those exhibiting stable responses) are considered, deviation variables are used and the magnitudes of the inputs are taken as positive throughout.

The second-order numerator-dynamics transfer functions exhibit an assortment of behavior, which are comprehensively analyzed in this section. For such systems the same three types of step and impulse responses viz. over-damped, under-damped and critically-damped as encountered in the standard second order systems are

exhibited. However there are some differences, which can be observed from response profiles shown in Figs. 1-4. There are discontinuities in initial values and/or initial slopes at zero time, which are not there in the values of standard impulse and the slopes of standard step responses. In general, the responses are faster than that of standard counterparts because the effective order is one. The speed of the response is not given only by the parameters t and Z, but also by the

relative magnitude of the constants in the numerator of equation (2).

The over-damped step response of these systems, unlike standard second-order systems, exhibits a range of behavior. We now find out the conditions of the respective profiles. Since the roots of the characteristic equation for the over-damped case are real and unequal, equation (2) can be written in a different form:

One of the two roots of the quadratic characteristic equation is smaller (say m) than the other (say n) for the over-damped case.

The derivative of equation (4) is the following equation, which also represents the unit impulse response:

For a feasible value of /max, the quantity within the logarithm term should be positive. This is possible under two conditions {namely (A) and (B)}: (A) l should be less than both m and n, (B) l should be more than both m and n. The condition (B) gives a negative value of time whereas (A) gives a positive value of time which corresponds to Fig. 1a, note that this curve depicts a point of infection. This time also corresponds to the zero value of impulse response in Fig. 2a The feasibility condition for equation (6) corresponding to case (A) is reiterated mathematically as: