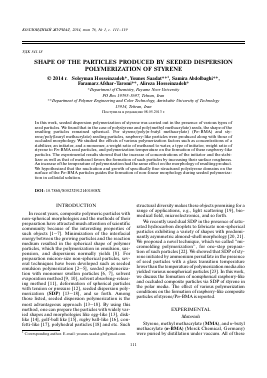 SHAPE OF THE PARTICLES PRODUCED BY SEEDED DISPERSION

In this work, seeded dispersion polymerization of styrene was carried out in the presence of various types of seed particles. We found that in the case of polystyrene and poly(methyl methacrylate) seeds, the shape of the resulting particles remained spherical. For styrene/poly(n-butyl methacrylate) (Pn-BMA) and sty-rene/poly(lauryl methacrylate) seeding particles, raspberry-like particles were produced along with those of occluded morphology. We studied the effects of various polymerization factors such as concentrations of a stabilizer, an initiator, and a monomer, a weight ratio of methanol to water, a type of initiator, weight ratio of styrene to Pn-BMA seed particles, and polymerization temperature on the formation of these raspberry-like particles. The experimental results showed that the increase of concentrations of the initiator and the stabilizer as well as that of methanol favors the formation of such particles by increasing their surface roughness. An increase of the temperature of polymerization had the same effect on the morphology of resulting product. We hypothesized that the nucleation and growth of specifically fine-structured polystyrene domains on the surface of the Pn-BMA particles guides the formation of non-linear morphology during seeded polymerization in colloidal solution.

In recent years, composite polymeric particles with non-spherical morphologies and the methods of their preparation have attracted mush attention of scientific community because of the interesting properties of such objects [1—7]. Minimization of the interfacial energy between the growing particles and the reaction medium resulted in the spherical shape of polymer particles, which the polymerization in emulsion, suspension, and dispersions normally yields [8]. For preparation micron-size non-spherical particles, several techniques have been developed such as seeded emulsion polymerization [2—5], seeded polymerization with monomer swollen particles [6, 7], solvent evaporation method [9, 10], solvent absorbing-releasing method [11], deformation of spherical particles with tension or pressure [12], seeded dispersion polymerization (SDP) [13—18], and so forth. Among those listed, seeded dispersion polymerization is the most advantageous approach [13—18]. By using this method, one can prepare the particles with widely varied shapes and morphologies like egg-like [13], disklike [14], golf-ball like [15], rugby ball-like [16], confetti-like [17], polyhedral particles [18] and etc. Such

structural diversity makes these objects promising for a range of applications, e.g., light scattering [19], biomedical field, microelectronics, and so forth.

We recently used dual SDP in the presence of saturated hydrocarbon droplets to fabricate non-spherical particles exhibiting a variety of shapes with predominantly asymmetric almond-shell morphology [20, 21]. We proposed a novel technique, which we called "micromolding polymerization", for one-step preparation of such particles [22]. We showed that SDP of styrene initiated by ammonium persulfate in the presence of seed particles with a glass transition temperature lower than the temperature ofpolymerization media also yielded various nonspherical particles [23]. In this work, we discuss the formation of nonspherical raspberry-like and occluded composite particles via SDP of styrene in the polar media. The effect of various polymerization conditions on the formation of raspberry-like composite particles of styrene/P«-BMA is reported.

(1) and (2) by counting at least 100 individual particles from the microscopic images.

monomers were stored in the refrigerator before use. A portion of 2,2'-azobis(isobutyronitrile) (AIBN) (Merck Chemical, Germany) of reagent grade was puried by recrystallization. All other materials were used without further purication, including lauryl methacrylate (LMA), PVP (weight-average molecular weight 36000 g/mol; Merck Chemical, Germany), benzoyl peroxide (BPO), ammonium persulfate (APS), potassium persulfate (KPS) and ethanol and methanol of guaranteed reagent grade.

Dispersion polymerization of styrene, MMA, n-BMA, and LMA was carried out under the conditions listed in Table 1. The morphology of produced particles was observed directly by Olympus optical microscope and Philips XL30 scanning electron microscope (SEM).

Where nt is the number of particles with diameter d.

All of the obtained seed particles except polystyrene (PS) ones were used as seeds in the SDP without any washing.

The SDP of styrene was carried out in sealed glass bottles under the conditions described in Table 2. The polymerization was performed for 24 h under nitrogen atmosphere by tumbling at 24 rpm in a thermostatic bath at 65°C. The obtained composite particles were investigated with optical microscope and SEM. Fourier transform infrared (FTIR) spectroscopy was performed with a Thermo Nicolet NEXUS 670 FTIR spectrophotometer using the KBr standard to characterize the obtained particles.

The SEM micrographs ofPS, PMMA, and Pn-BMA seed particles and optical micrograph of PLMA seed particles produced by dispersion polymerization under the conditions described in Table 1 are shown in Fig. 1. For PMMA and Pn-BMA particles, the values of Dn were 3 and 1.7 ^m and those of PDI were 1.004 and 1.012, respectively. Because of the adhesion of PLMA particles to the support due to the low glass transition temperature (Tg) of PLMA, we studied these seeds using optical microscopy to determine Dn = 2.1 ^m and PDI = 1.018. In case of PS, seed particles obtained by dispersion polymerization had bimodal size distribution (2.4 and 1.6 ^m) with PDI = = 1.008 for each size.

Okubo et al. applied SDP of styrene in the presence of Pn-BMA seed particles and produced Pn-BMA/PS composite particles with oil-in-oil structure, in which multiple fine PS domains formed inside and near the surface of the Pn-BMA particles [24]. In our study, it seems that the size of the PS domains became larger

Fig. 1. SEM micrographs of (a) PS, (b) PMMA and (c) P«-BMA seed particles; (d) optical micrograph of PEHMA particles produced by dispersion polymerization under the conditions listed in Table 1.

upon changing the polymerization conditions that results in raspberry-like morphology of P«-BMA/PS composite.

The polymerization of styrene in the presence of PLMA seeds under similar conditions gave particles with occluded morphology and with a size larger than that of the seeds. It is noteworthy that, after drying, all of the PLMA particles, which are visible in optical micrographs, are coagulated (because of the particle adhesion due to the low Tg of PLMA phase). The darker spots in these particles are the polymerized styrene domains. The presence of styrene seems to decrease the stability of the PLMA seeds that resulted in floccula-tion increasing the size of the PLMA domains. The polymerization of styrene in flocculated structure guided the formation of the particles with occluded morphology.

The raspberry-like particles described herein are attractive due to their unique surface morphology promising for the formation of light scattering coatings, those of controlled surface roughness at the micrometer scale and so forth. Most studies reported in

To develop our approach further, we studied the influence of polymerization conditions on the formation of such particles.