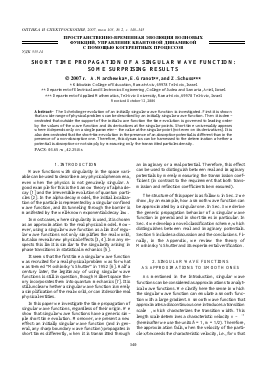 Abstract—The Schrodinger evolution of an initially singular wave function is investigated. First it is shown that a wide range of physical problems can be described by an initially singular wave function. Then it is demonstrated that outside the support of the initial wave function the time evolution is governed to leading order by the values of the wave function and its derivatives at the singular points. Short time universality appears where it depends only on a single parameter - the value at the singular point (not even on its derivatives). It is also demonstrated that the short-time evolution in the presence of an absorptive potential is different than in the presence of a non-absorptive one. Therefore, this dynamics can be harnessed to the determination whether a potential is absorptive or not simply by measuring only the transmitted particles density.

Wave functions with singularity in the space variable can be used to describe many physical phenomena, even when the physics is not genuinely singular. A good example for this is the Gamow theory of alpha decay [1] and the irreversible evolution of quantum particles [2]. In the alpha decay model, the initial localization of the particle is represented by a singular confined wave function, and its tunneling through the barrier is manifested by the well-known exponential decay law.

In most cases, where singularity is used, it is chosen as an approximation to the real physical model. However, using a singular wave function as a limit of regular wave functions not only simplifies the real world, but also reveals new physical effects [3, 4]. In many respects this limit is similar to the singularity arising in phase transitions in statistical mechanics [5].

The structure of this paper is as follows: in Sec. 2 we show, by an example, how a smooth wave function can be approximated by a singular one. In Sec. 3 we derive the generic propagation behavior of a singular wave function in general and in short times in particular. In Sec. 4 we develop a novel classification scheme, which distinguishes between real and imaginary potentials. Section 5 includes a discussion and the conclusions. Finally, in the Appendix, we review the theory of Moshinsky's Shutter and its experimental verification.

AS APPROXIMATIONS TO SMOOTH ONES

exceeds xmax ~ t/^. As a specific example, we choose where 9(x) is an arbitrary analytic function. For the

special case of a semi-infinite plane wave 9(x) = e,kx the general solution is [9]

as an approximation to the discontinuous wave function

The propagation of this initial wave function was calculated by several method [10, 11], of which we choose that of [11]. The general solution for the initial wave plane is

transform of 9(x). Using the Moshinsky function, we get

This value is negligible relative to y1, 2 only when ^x/t <§ 1 (note that the integral goes like exp(ix 2/4t) and • every spatial derivative is equivalent to a multiplication g by the factor ix/2t). Thus, we obtain again that in the regime x < xmax ~ t/£, (that is, at short distances or long periods) y1 is a very good approximation to y2. Of course, this is not surprising, because a small change (in

the L2 norm) in the initial function in the Schrodinger Using the expansion equation makes a small change in the solution. The approximation error is determined by the parameter

I. The Generic Propagation of a Jump Discontinuity

Thus, the general solution for any semi-infinite wave function is

Equation (4) corresponds to an initial wave function with discontinuities at the points a, b. The probability density is

We write a wave function with compact support as

where the indicator function %[a, b] is defined by

Since (1) is invariant to translations, the propagated We ree that; Nereis interference tet^n the t^ ^g^

time, given by exp

If the initial wave function is continuous, but has discontinuous derivatives at the edges, the leading term in the expansion (3) of the probability density gives

b. There is an interference term that depends on both discontinuities.

c. There is temporal interference that depends on the size of the initial wave function.

As a matter of fact, the representation (3) is also ap- where the tags denote spatial derivatives, i.e., y'(c, 0) = propriate for initial wave functions supported on the en- = Эу(х, 0)/Эх X = c. We see the same type of interference tire line, but have a point of non analyticity. However, in this case as well.

SHORT TIME PROPAGATION OF A SING