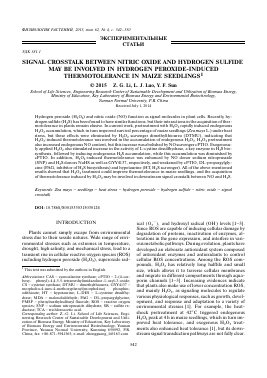 Hydrogen peroxide (H2O2) and nitric oxide (NO) function as signal molecules in plant cells. Recently, hydrogen sulfide (H2S) has been found to have similar functions, but their interactions in the acquisition of ther-motolerance in plants remain elusive. In current work, pretreatment with H2O2 rapidly induced endogenous H2O2 accumulation, which in turn improved survival percentage of maize seedlings (Zea mays L.) under heat stress, but these effects were eliminated by H2O2 scavenger dimethylthiourea (DTMU), indicating that H2O2-induced thermotolerance was involved in the accumulation of endogenous H2O2. H2O2 pretreatment also increased endogenous NO content, but this increase was abolished by NO scavenger cPTIO. Exogenous-ly applied H2O2 also stimulated increase in the activity of L-cystine desulfhydrase, a key enzyme in H2S biosynthesis, followed by inducing endogenous H2S accumulation, while this accumulation was diminished by cPTIO. In addition, H2O2-induced thermotolerance was enhanced by NO donor sodium nitroprusside (SNP) and H2S donors NaHS as well as GYY4137, respectively, and weakened by cPTIO, DL-propargylgly-cine (PAG, inhibitor of H2S biosynthesis) and hypotaurine (HT, H2S scavenger). All of the above-mentioned results showed that H2O2 treatment could improve thermotolerance in maize seedlings, and the acquisition of thermotolerance induced by H2O2 may be involved in downstream signal crosstalk between NO and H2S.

ical (O2-), and hydroxyl radical (OH) levels [1-5]. Since ROS are capable of inducing cellular damage by degradation of proteins, inactivation of enzymes, alterations in the gene expression, and interfere in various metabolic pathways. During evolution, plants have developed an elaborate antioxidant system composed of antioxidant enzymes and antioxidants to control cellular ROS concentrations. Among the ROS compounds, H2O2 has relatively long halflife and small size, which allows it to traverse cellular membranes and migrate in different compartments through aqua-porin channels [1-3]. Increasing evidences indicate that plants also make use of lower concentration ROS, and mainly H2O2, as signaling molecules to regulate various physiological responses, such as growth, development, and response and adaptation to a variety of environmental stresses [1]. For example, the heat-shock pretreatment at 42°C triggered endogenous H2O2 peak at 4 h in maize seedlings, which in turn improved heat tolerance, and exogenous H2O2 treatments also enhanced heat tolerance [1], but its downstream signal transduction pathways are not fully clear.

Nitric oxide (NO), a ubiquitous gaseous molecule, is considered as another second messenger in plants, which displays both pro-oxidant and antioxidant properties [2]. It is now largely accepted that NO is a "jack-of-all-trades" molecule regulating plant cell responses under physiological and pathological conditions throughout the entire plant life cycle. In addition to that, NO controls plant responses to a multiple of abiotic factors such as extreme temperatures, high salinity, hypoxic conditions, mechanical and oxida-tive injuries, heavy metals accumulation, treatment with herbicides, osmotic stresses, light, gravity, and UV-B [2]. Our recent work showed that NO donor sodium nitroprusside (SNP) pretreatment could improve the tolerance of maize seedlings to high temperature stress [5]. In addition, NO may also collaborate with H2O2 to switch on stress tolerance by inducing scavenging of excess H2O2 [2].

Hydrogen sulfide (H2S), playing multiple physiological roles, has recently been identified as a third endogenous gaseous transmitter after NO and reactive oxygen species (ROS), mainly H2O2, in plant systems [3], its homeostasis is regulated by synthetic and degra-dative enzymes, L-cysteine desulfhydrase (L-DES), sulfite reductase (SR), and cyanoalanine synthase (CAS) are responsible for H2S synthesis, while cysteine synthase (CS) takes charge of the degradation of H2S [3]. The positive effects of H2S is being emerged in seed germination, organogenesis, stomata opening, osmotic stress, salt stress, oxidative stress, and heavy metal stress [3]. Our previous results also showed that treatment with sodium hydrosulfide (NaHS), a H2S donor, can improve resistance of tobacco cells [4], maize and wheat seedlings [5-7] to high temperature and drought, and the acquisition of tolerance was involved in calcium messenger system and the accumulation of osmolytes such as proline and trehalose. In addition, it was reported that ethylene-induced stomatal closure requires H2S, and the Arabidopsis mutant Atl-cdes (L-cysteine desulfhydrase) does not close stomata in response to ethylene or NO [3]. Our more recent study found that pretreatment with the NO donor sodium ni-troprusside (SNP) induced accumulation of endogenous H2S, followed by improving heat tolerance of maize seedlings [6]. These data suggested that NO may be upstream signal molecule of H2S in signal transduction pathway involved in multiple physiological process like acquisition of heat tolerance in plants.

Based on the above-mentioned studies, we hypothesized that crosstalk among H2O2, NO, and H2S may exist in the acquisition of thermotolerance in different plants including maize. Maize is not the third most important food grain crop after wheat and rice only, but also a new model plant, and high temperature is a central environmental factor that affects its metabolism, growth, development, reproduction, and yield [8, 9]. However, in maize seedlings, interactions of

A commercial variety of maize (Zea mays L., Huidan No. 4) was used. The seeds were sterilized in 0.1% HgCl2 for 10 min and pre-soaked in distilled water at 26°C for 12 h for imbibition. The soaked seeds were sowed on six layers of wetted filter papers in trays (24 cm x 16 cm, approximately 300 seeds per tray) with covers and germinated at 26°C in the dark for 2.5 days.

To determine the survival percentage of maize seedlings, the treated and control seedlings were analyzed. After heat stress (48 °C for 18 h), seedlings were transferred to climate chamber with 26°C, 100 ^mol/(m2 s) illumination and 12 h photoperiod, for a week for recovery, and