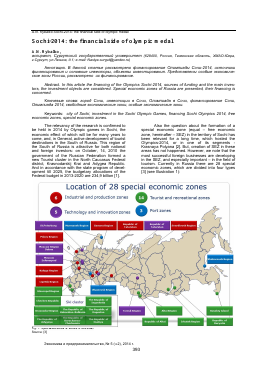 ﻿A.N. Rybalko Sochi-2014: the financial side of olympic medal

Sochi-2014: the financial side of olympic medal

Abstract. In this article the financing of the Olympics Sochi-2014, sources of funding and the main investors, the investment objects are considered. Special economic zones of Russia are presented, their financing is concerned.

The relevancy of the research is confirmed to be held in 2014 by Olympic games in Sochi, the economic effect of which will be for many years to come, and, in General, active development of tourist destinations in the South of Russia. This region of the South of Russia is attractive for both national and foreign investors: on October, 14, 2010 the government of the Russian Federation formed a new Tourist cluster in the North Caucasus Federal district, Krasnodarskij Krai and Adygea Republic. And in accordance with the state program of development till 2025, the budgetary allocations of the Federal budget in 2013-2020 are 234,9 billion [1].

Also the question about the formation of a special economic zone (equal - free economic zone, hereinafter - SEZ) in the territory of Sochi has been relevant for a long time, which hosted the 0lympics-2014, or in one of its segments -Krasnaya Polyana [2]. But, creation of SEZ in these areas has not happened. However, we note that the most successful foreign businesses are developing in the SEZ, and especially important - in the field of tourism. Currently in Russia there are 28 special economic zones, which are divided into four types [3] (see Illustration 1):

Moscow Re* Dubna lion I

The Republic of Ingushetia

In Russia there is the greatest number of free economic zones of tourist-recreational type - 14. There was a trend of significant increase in the number of foreign investors in SEZ of Russia [4]. By 2013, there were over 300 (see Illustration 2).

Fia. 2. The number of residents of special economic zones of Russia.

The key figures of SEZ's efficiency

Let us consider the interest of investors and financial flows conducted due to holding of the Olympic games Sochi-2014.

0lympics-2014 was held in two locations -the mountain and coastal clusters. The coastal clus-

ter is "Olympic Park" and is located at 265 hectares in the Imeretinskaya valley. The author made the Table 1, which provides data on the sports facilities and costs [5, 1].

A.N. Rybalko Sochi-2014: the financial side of Olympic medal

Total spending on the Olympics in Sochi was 1526 billion roubles and in terms of expenditure it is the most expensive Olympics in the history of the games [6]. Table 2 presents comparable costs for the Olympics, starting with 2004 [7].

Announced in early autumn, 2013 by President of Russia Vladimir Putin and confirmed in January, 2014 by Vice-Premier in charge of the preparations for the winter games D.Kozak the total budget allocated for the construction of all Olympic objects and the Olympic and Paralympic games 2014 in Sochi amounted to 214 billion (without cost of infrastructure). This amount is the sum of the budgets for the construction of Olympic facilities and direct holding of the games. According to President Putin: "100 billion rubles of this money is net public funding, and 114 billion will be allocated at the expense of investors". The amount of 214 billion rubles (on erection of objects) constitutes 20% of the total planned volume of investment. The remaining 80% of all the funds - investment into infrastructure of Sochi [8].

The final amount of financing of Olympic objects' construction and Sochi necessary infrastructure is 1,526 trillion rubles (about 51 billion dollars). Including the state Corporation "Olympstroy" invested 174,9 billion rubles, investors - to 1.005 trillion rubles, the administration of Krasnodar region and Sochi - 109 billion roubles, the Federal authorities -237 billion rubles [9]. Thus, investors make up the largest share in the structure of financing the Olympics. Note that the biggest creditor to the preparation for the Olympic games in Sochi is the state Corporation "Vnesheconombank", issued responsible contractors (see Table 1) the Olympic loans in the amount of 240 billion rubles [9]. Let us consider the main investors and their contribution to the Olympics:

According to the global network of agencies Havas Sports-and-Entertainment Group (HSE), taking from analysis of the results of the London Olympics 2012, the image of the companies - Olympic sponsors on average improved by 25-50%. Strengthening positive attitude towards the brand is often transformed into a significantly higher probability of purchase [3].

For Russia the holding of the Games i