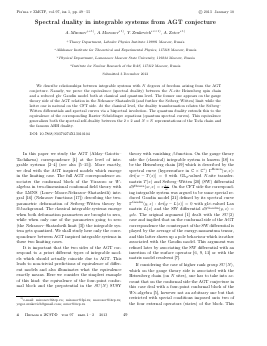 We describe relationships between integrable systems with N degrees of freedom arising from the AGT conjecture. Namely, we prove the equivalence (spectral duality) between the N-cite Heisenberg spin chain and a reduced glw Gaudin model both at classical and quantum level. The former one appears on the gauge theory side of the AGT relation in the Nekrasov-Shatashvili (and further the Seiberg-Witten) limit while the latter one is natural on the CFT side. At the classical level, the duality transformation relates the SeibergWitten differentials and spectral curves via a bispectral involution. The quantum duality extends this to the equivalence of the corresponding Baxter-Schrödinger equations (quantum spectral curves). This equivalence generalizes both the spectral self-duality between the 2 x 2 and N x N representations of the Toda chain and the famous AHH duality.

In this paper we study the AGT (Alday-Gaiotto-Tachikawa) correspondence [1] at the level of integrable systems [2-4] (see also [5-15]). More exactly, we deal with the AGT inspired models which emerge in the limiting case. The full AGT correspondence associates the conformal block of the Virasoro or W-algebra in two-dimensional conformal field theory with the LMNS (Losev-Moore-Nekrasov-Shatashvili) integral [16] (Nekrasov functions [17]) describing the two-parametric deformation of Seiberg-Witten theory by ^-background. The classical integrable systems emerge when both deformation parameters are brought to zero, while when only one of the parameters going to zero (the Nekrasov-Shatashvili limit [3]) the integrable system gets quantized. We shall study here only the correspondence between AGT inspired integrable systems in these two limiting cases.

It is important that the two sides of the AGT correspond to a priori different types of integrable models which should actually coincide due to AGT. This leads to non-trivial predictions of equivalence of different models and also illuminates what the equivalence exactly means. Here we consider the simplest example of this kind: the equivalence of the four-point conformal block and the prepotential in the SU(N) SUSY

theory with vanishing ^-function. On the gauge theory side the (classical) integrable system is known [18] to be the Heisenberg chain [19] which is described by the spectral curve (hypersurface in C x C*) rHeisen(w,x): det[w — T(x)] = 0 with GL2-valued N-site transfermatrix T (x) and Seiberg-Witten [20] (SW) differential dSHeisen(w, x) = x^f. On the CFT side the corresponding integrable system was argued to be some special reduced Gaudin model [21] defined by its spectral curve rGaudin(y,z) : det[y — L(z)] = 0 with glN-valued Lax matrix L(z) and the SW differential dSGaudin(y, z) = ydz. The original argument [1] dealt with the SU(2) case and implied that on the conformal side of the AGT correspondence the counterpart of the SW differential is played by the average of the energy-momentum tensor, and this latter shows up a pole behaviour which is rather associated with the Gaudin model. This argument was refined later by associating the SW differential with an insertion of the surface operator [6, 9, 11] or with the matrix model resolvent [7].

If considering the case of higher rank group SU(N), which on the gauge theory side is associated with the Heisenberg chain (on N sites), one has to take into account that on the conformal side the AGT conjecture in this case deal with a four-point conformal block of the WN-algebra [5], however not an arbitrary one but that restricted with special conditions imposed onto two of the four external operators (states) of the block. This

means that there are two arbitrary operators parameterized by N — 1 parameters each and two other operators parameterized by only one parameter each. In integrable terms this means that one should expect for the associated integrable system, the reduced Gaudin model that it is described by two coadjoint orbits of the maximal dimensions inserted in two points, and by two coadjoint orbits of the minimal dimensions inserted in two other points. As we shall see, this is, indeed, the case.

In this letter we show that the change of variables 2 = w, y = x/w relates the curves and SW differentials of the two integrable systems under discussion (the Heisenberg spin chain and the reduced Gaudin model). It means that with this change of variables the following relations hold true:

This type of relations between spectral curves appeared in [22]2).

Let a pair of (algebraically) integrable models be described by the spectral curves r(A, 2) = 0, r'(A',2/) = = 0 and the corresponding SW differentials dS (A, 2), dS/(A/,2/). Then the models are called spectrally dual (this term is borrowed from [23]) at the classical level if there exists a change of variables

where = emphasizes that the SW differential for the integrable system is determined up to a full differential on the spectral curve.

The duality transformation acts by bispectral involution [24] which interchanges the roles of the eigenvalue-variable and spectral parameter.

A well-known simpler example (found by L. Faddeev and L. Takhtajan [25]) is the periodic Toda chain. It can be described by both the gl(N)-valued Lax matrix:

2) We call the duality between Gaudin models described in [22] as AHH (Adams—Harnad—Hurtubise) duality. See the comment in the end of the paper.

The spectral curves defined by these representations are related by the bispectral involution, i.e.

coincide. The SW differential is the same in both cases dS = A-^. Therefore, the periodic Toda chain is a self-dual model [26].

The quantum version of the duality appears from the exact quasi-classical quantization of the spectral curves. Considering the SW differential as a symplectic 1-form [27] on C x C*-plane (y, z) yields a pair of canonical variables (p(y, z),q(z)) which brings the SW differential to dS(y, z) = pdq. Then there is a natural quantization of the spectral curve defined by the rule (p, q) ^ (hdq, q).

Let two integrable models be described by the Baxter equations

They are called spectrally dual at the quantum level if their Baxter equations coincide.

For the above mentioned models one has:

with some choice of ordering. The wave functions can be written in terms of the quantum deformation of the SW differential on the spectral curve, i.e. ^(z) = exp [-j- f9 dS(h)], where dS(h) = p(q, h)dq and p(q, 0) = p(q)|r. The monodromies of the wave function

around A- and B-cycles of r are given by the quantum deformed action type variables [4]:

where Fns is the Nekrasov-Shatashvili limit [3] of the LMNS integral [16].

which imply the quantum spectral duality.

We verify that (11) can be re-written as the quantum spectral curve of the Gaudin model (8). In this way we arrive to the quantum version of duality:

Below we briefly describe the models and formulate the spectral duality. Some comments are given at the end. Most of details can be found in [30]. In that extended version we also describe the Poisson map between models.

3) It arises as an equation for the Baxter Q-operator eigenvalues in the Quantum Inverse Scattering Method [28]. Originally, it was written in difference (Fourier-dual) form.

2. Special (reduced) gl^ Gaudin model on to}. It is described by the spectral curve

with additional conditions including the reduction constraints4'

i.e. A1 and Aq are glN matrices of rank 1 (this type of configuration was already discussed [31, 10]). Using specification (18) the spectral curve can be find explicitly using the following simple fact: For any