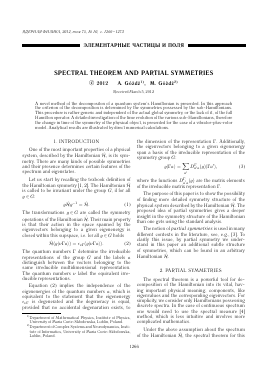 A novel method of the decompositon of a quantum system's Hamiltonian is presented. In this approach the criterion of the decomposition is determined by the symmetries possessed by the sub-Hamiltonians. This procedure is rather generic and independent of the actual global symmetry, or the lack of it, of the full Hamilton operator. A detailed investigation of the time evolution of the various sub-Hamiltonians, therefore the change in time of the symmetry of the physical object, is presented for the case of a vibrator-plus-rotor model. Analytical results are illustrated by direct numerical calculations.

1. INTRODUCTION One of the most important properties of a physical system, described by the Hamiltonian H, is its symmetry. There are many kinds of possible symmetries and their presence determines certain features of the spectrum and eigenstates.

Let us start by recalling the texbook definition of the Hamiltonian symmetry [1,2]. The Hamiltonian H is called to be invariant under the group G, if for all g e G:

The transformations g e G are called the symmetry operations of the Hamiltonian H. Their main property is that their action in the space spanned by the eigenvectors belonging to a given eigenenergy is closed within this supspace, i.e. for all g e G holds

Equation (2) implies the independence of the eigenenergies of the quantum numbers a, which is equivalent to the statement that the eigenenergy evr is degenerated and the degeneracy is equal, provided that no accidental degenaration exists, to

where the functions Daa(g) are the matrix elements of the irreducible matrix representation r.

The notion of partial symmetries is used in many different contexts in the literature, see, e.g., [3]. To clarify this issue, by partial symmetry we understand in this paper an additional subtle structure of symmetries, which can be found in an arbitrary Hamiltonian H.

The spectral theorem is a powerful tool for decomposition of the Hamiltonian into its vital, having important physical meaning, components, like eigenvalues and the corresponding eigenvectors. For simplicity, we consider only Hamiltonians possessing discrete spectra. In the case of continuous spectrum one would need to use the spectral measure [4] method, which is less intuitive and involves more complicated mathematics.

Under the above assumption about the spectrum of the Hamiltonian Hi, the spectral theorem for this

operator can be expressed as:

treated as different, although they are described by the same group structure.

The series of sub-Hamiltonians (8) reveals the intrinsic symmetry structure of the full Hamiltonian.

It can even happen that the Hamiltonian H has no global symmetry, but it has a very reach partial-symmetry structure.

Note that the set of Hermitean operators AG for which Sym(AG) = G and the condition (9) is fulfilled, defines the operator A:

Physically it means, that knowing the eigenenergies and the set of the corresponding subspaces, i.e. knowing the pairs (ev,PV), one can construct the Hamiltonian of the physical object uniquely.

Next, let us define sets of projection operators Pv in such a way that the set Og consists of operators possessing a common symmetry group G,

It is obvious that the union of all the sets Og gives the set of all the operators Pv involved in the spectral decomposition (4) of the Hamiltonian H. In addition, the sets Og and 0G/ have no common elements for G = G'.

This procedure allows to define the set of the operators, which will be called sub-Hamiltonians, associated with certain symmetry group:

which has, by definition, the orthogonal partial-symmetry decomposition given by Eq. (10).

The proof is immediate. The ortogonality of states belonging to different symmetry groups implies by construction that

for G' = G. Taking into account the orhogonal partial-symmetry decomposition one can write:

The orthogonal partial-symmetry decomposition suggests a new possible classification of the energy spectra of a physical system. The eigenstates can be groupped into energy bands corresponding to the same symmetry and generated by well defined sub-Hamiltonians. For example, a recent challenge in the experimental nuclear spectroscopy is the search for nuclei having their energy bands corresponding to different point symmetries, e.g. the ground state rotational energy band corresponds to D2^ symmetry group, and the octupole band corresponds to the tetrahedral symmetry Td, see, e.g., [5] and references therein. It requires to consider the Hamiltonians of the form (8), where every sub-Hamiltonian represents a single energy band. This problem, in some sense opposite to the symmetry breaking problem, as the resultant symmetry may be higher than the initial symmetry of the full Hamiltonian, requires further investigation and will be considered elsewhere.

As an application, in Section 5 we consider the schematic model of a vibrator-plus-rotor system, in which the moments of inertia are dependent on

the number of oscillatory quanta of the harmonic oscillator. Using this model we analyze the problem of the spontaneous choice of a symmetry of the system within the framework of the so-called projection evolution approach, which treats time as a dynamical variable. The approach is described in a series of papers [6] and briefly sketched in the following two sections.

The usually considered quantum-mechanical time evolution is realized through unitary operators, in which time appears as a parameter and not as an operator. In fact, big effort has been made to formulate the quantum mechanics in a way consistent with the general relativity assumption that time is just another space—time dimension and as such, should be treated equally with the spatial coordinates — the results are unsatisfactory till today.

Thinking about time as a quantum observable leads to the following dilemma:

(i) does the change of time imply the possible change of a quantum state,

(ii) or maybe the change of a quantum state of the system "generates" time?

The usually assumed answer (i) results in the time being just a parameter. The second answer, however, allows the time to be treated on the same footing as the other position variables in the space—time.

Our main assumption is that the change of a state is a spontaneous fundamental process realized in Nature. Therefore the quantum evolution may be viewed as a stochastic process parameterized by an ordering parameter t which, in principle, is different from time. The parameter t is only an ordering parameter, not an additional dimension of the space—time. The domain of the parameter t generally does not need to have a metric or any reacher structure. For practical reasons, however, one can always treat it as a subset of the real numbers.

The projection evolution operators at the evolution step t are defined as a family of linear mappings between spaces of trace class operators defined on Hilbert spaces K (initial space) and K' (resultant space). The formalism of quantum operations was invented around 1983 by Krauss [7] who relied on the earlier mathematical works of Choi [8]. It has the advantage that it describes oper