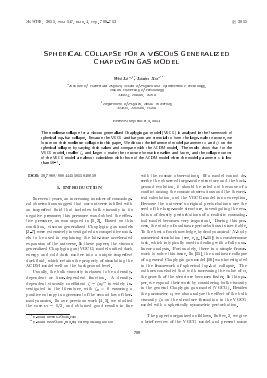 SPHERICAL COLLAPSE FOR A VISCOUS GENERALIZED

The nonlinear collapse for a viscous generalized Chaplygin gas model (VGCG) is analyzed in the framework of spherical top-hat collapse. Because the VGCG and baryons are essential to form the large-scale structure, we focuse on their nonlinear collapse in this paper. We discuss the influence of model parameters a and Co on the spherical collapse by varying their values and compare with the ACDM model. The results show that for the VGCG model, smaller Co and larger a make the structure formation earlier and faster, and the collapse curves of the VGCG model are almost coincident with those of the ACDM model when the model parameter a is less than 1(T2.

In recent years, ail increasing number of cosmologi-cal observations suggest that our universe is filled with an imperfect fluid that includes bulk viscosity in its negative pressure; this pressure was dubbed the effective pressure, as was argued in [1,2]. Based on this condition, viscous generalized Chaplygin gas models [3 7] were extensively investigated as competitive models to be used in explaining the late-time accelerated expansion of the universe. In these papers, the viscous generalized Chaplygin gas (VGCG) model unified dark energy and cold dark matter into a unique imperfect dark fluid, which retains the property of simulating the ACDM model well on the background level.

Usually, the bulk viscosity is chosen to be a density-dependent or time-dependent function. A density-dependent viscosity coefficient c = Copm is widely investigated in the literature, with Co > 0 ensuring a positive entropy in agreement of the second law of thermodynamics. In our previous work [4,5], we studied the case m = 1/2, and obtained good results in line

with the cosmic observations. If a model cannot describe the observed large-scale structure and the background evolution, it should be ruled out because of a conflict among the cosmic observations and the theoretical calculation, and the VGCG model is no exception. Because the universe's original perturbations are the seed of the large-scale structure, investigating the evolution of density perturbations of a realistic cosmolog-ical model becomes very important. During this process, the study of nonlinear perturbations is inevitable. To the best of our knowledge, hydrodyiianiical/Ar-body numerical simulation (see, e. g., [8 11]) is a cumbersome task, which is typically used in dealing with a fully nonlinear analysis. Fortunately, there is a simple framework to solve this issue. In [15], the nonlinear collapse of a general Chaplygin gas model [16] was investigated in the framework of spherical top-hat collapse. The authors concluded that with increasing the value of a:, the growth of the structure becomes faster. In this paper, we expand their work by considering bulk viscosity in the general Chaplygin gas model (VGCG). Besides the parameter a:, we also analyze the effect of the bulk viscosity Co °n the structure formation in the VGCG model with a spherically symmetric perturbation.

The paper is organized as follows. In Sec. 2, we give a brief review of the VGCG model and present some

basic equations for spherical top-hat collapse. Section 3 describes the method and main results. The conclusion is presented in the last section.

2. THE BASIC EQUATIONS FOR SPHERICAL TOP-HAT COLLAPSE IN THE VGCG MODEL

In an isotropic and homogeneous universe, the effective pressure of a VGCG model [4, 5] is given in the form [14 161

and the equaton of energy density is Bs

and we require that 0 < Ds < 1 and Co < 1/v^J- We can obtain the standard ACDM model when a = 0 and Co = 0. By considering the VGCG as a unified component and taking the assumption of a purely adiabatic perturbations, it is easy to obtain the Fricdmann equation

and the effective adiabatic sound speed for the VGCG

Because of the negative values of ir, ff. a > 0 is required in order to ensure that the speed of sound is nonnegative.

The spherical collapse (SC), which provides a way to glimpse into the nonlinear regime of the perturbation theory, was introduced first by Gunn and Gutt

1972 [17]. Following the assumption of a top-hat profile (that the density perturbation is uniform throughout the collapse), the evolution of the perturbation is only time-dependent. In other words, we can omit the gradients inside the perturbed region, as was done in [12].

In the spherical top-hat collapse (SCTH) model, the equations for background evolution are

and the basic equations in the perturbed region are

where pc = p + Sp and pc = p + Sp are the perturbed quantities, and h is related to H in the STHC framework as

where 9 = V • v is the divergence of the peculiar velocity v.

where the effective speed of sound is c2. = (Sp/Sp)i, where t stands for different energy components. Equations (11) and (12) can be rewritten in a form with the scale factor a.

From the above equations, we can find that wc and c2 are important quantities. The definition of the equation of state wr is

and the most important effective speed of sound is Pc ~ P

Fig. 1. The evolutions of density perturbations with respect to the redshift for VGCG models, where the bulk viscosity coefficient is fixed at Co = 0.000708. The thick, dashed, dotted, thin grey solid, and grey dashed lines are for a = 1,0.5,0.1,0.01,0 respectively, for baryons (a) and the VGCG (b). The horizontal line 6 = 1 denotes the limit of linear perturbation and the vertical parts of curved lines are the collapse of the perturbed regions

3. THE METHOD AND RESULTS

Table. Models for the STHC model, where the values of a are small nonnegative values because of the constraint from background evolution. Note that model "a" is identical to the ACDM model. The redshift zta is the turnaround redshift when the collapse of the perturbed region begins

Fig. 3. The evolutions of density perturbations with respect to the redshift for VGCG models, where the model parameter is fixed at a = 0.035 and the thick, dashed, dotted and grey solid curved lines are for Co = 10-3,10-4,10-5, 0 respectively for baryons (a) and the VGCG (b). The horizon line 6 = 1 denotes the limit of linear perturbation and the vertical parts of the curved lines are the collapse of the perturbed regions

nonlinear collapse. By fixing Co = 0.000708, which is obtained in our previous work [4] and varying the model parameter a = 1, 0.5, 0.1, and 0.01, we obtain the results shown in Table and in Figs. 1 and 2, where zta is the turnaround redshift when the collapse of the perturbed region begins. We also plot the collapse curves of the ACDM model using the grey dashed curves in the two figures above to compare it with the VGCG model. From these results, we can conclude that the perturbations collapse earlier for the larger values of a; furthermore, the collapse curves of the VGCG model are almost coincident with those of the ACDM model when the model parameter a is less than 10-2. This conclusion is the same as the result obtained in the previous papers, such as Ref. [12,19].

Next, we show the effect of Co on the evolution of density perturbations in the VGCG model.