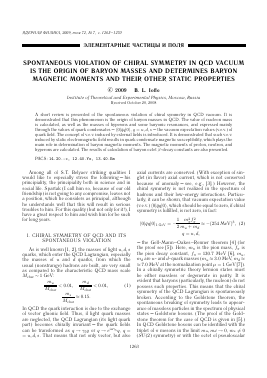 A short review is presented of the spontaneous violation of chiral symmetry in QCD vacuum. It is demonstrated that this phenomenon is the origin of baryon masses in QCD. The value of nucleon mass is calculated, as well as the masses of hyperons and some baryonic resonances, and expressed mainly through the values of quark condensates — (0|qq|0), q = u,d,s — the vacuum expectation values (v.e.v.) of quark field. The concept of v.e.v. induced by external fields is introduced. It is demonstrated that such v.e.v. induced by static electromagnetic field results in quark condensate magnetic susceptibility, which plays the main role in determination of baryon magnetic moments. The magnetic moments of proton, neutron, and hyperons are calculated. The results of calculation of baryon octet ^-decay constants are also presented.

Among all of S.T. Belyaev striking qualities I would like to especially stress the following — his principiality, the principiality both in science and in social life. Spartak (I call him so, because of our old friendship) is not going to any compromise, leaves not a position, which he considers as principal, although he understands well that this will result in serious troubles to him. For this quality (but not only for it!), I have a great respect to him and wish him for be such for long years.

1. CHIRAL SYMMETRY OF QCD AND ITS SPONTANEOUS VIOLATION

As is well known [1, 2], the masses of light u, d, s quarks, which enter the QCD Lagrangian, especially the masses of u and d quarks, from which the usual (nonstrange) hadrons are built, are very small as compared to the characteristic QCD mass scale Mchar -1 GeV:

axial currents are conserved. (With exception of singlet (in flavor) axial current, which is not conserved because of anomaly — see, e.g., [3].) However, the chiral symmetry is not realized in the spectrum of hadrons and their low-energy interactions. Particularly, it can be shown, that vacuum expectation value (v.e.v.) (0|qq|0), which should be equal to zero, if chiral symmetry is fulfilled, is not zero, in fact:

In QCD the quark interaction is due to the exchange of vector gluonic field. Thus, if light quark masses are neglected, the QCD Lagrangian (its light quark part) becomes chirally invariant — the quark fields can be transformed as q — j5q or q — eiaY5 q, q = = u, d, s. That means that not only vector, but also

— the Gell-Mann—Oakes—Renner theorem [4] (for the proof see [5]). Here, mn is the pion mass, fn is the pion decay constant, fn = 130.7 MeV [6], mu, md are u- and d-quark masses (mu & 3.0 MeV, md ~ & 7.0 MeV at the normalization point i = 1 GeV [7]). In a chirally symmetric theory fermion states must be either massless or degenerate in parity. It is evident that baryons (particularly, the nucleon) do not possess such properties. This means that the chiral symmetry of the QCD Lagrangian is spontaneously broken. According to the Goldstone theorem, the spontaneous breaking of symmetry leads to appearance of massless particles in the spectrum of physical states — Goldstone bosons. (The proof of the Goldstone theorem for the case of QCD is given in [5].) In QCD Goldstone bosons can be identified with the triplet of n mesons in the limit mu, md — 0, ms = 0 (SU(2) symmetry) or with the octet of pseudoscalar

2. THE ORIGIN OF BARYON MASSES

As was already said, there are two facts clearly indicating the spontaneous violation of chiral symmetry in QCD:

1) the existence of quark condensate and its typical hadronic scale;

connected? At first sight it seems that they are not. For dimensional grounds we can write

where m is the proton mass and c is some numerical constant. The substitution of the value of proton mass and of the numerical value (2) in (3) gives: c & 50 — an unreasonable large number. In fact, the relation of form (3) holds indeed and the approximate formula reads [8]

The formula (4) has no adjustable parameters and its accuracy is about 15%.

Let us now dwell on the derivation of a more precise expression for proton mass in QCD in terms of the v.e.v. of various operators. We use the Operator Product Expansion (OPE) method [9], intensely exploited by Shifman, Vainshtein, and Zakharov (SVZ) [10] in investigation of the properties of QCD and determination of the meson masses. Define the polarization operator:

where n(x) is three-quark current with proton quantum numbers built from u and d quark fields. The explicit form of the current n(x) is:

Let us consider first the chirality-conserving structure ni(p2), perform the OPE, and classify the operators according to their dimensions dn. The operator of dimension 0 is the unit operator, O0 = 1. Its contribution is proportional to p4 ln p2. (The polynomical terms are disregarded, they are not contributing to the sum rules below.) The next term of OPE has the dimension d = 4 and is proportional to gluon condensate, O4 = (as/n)(0lG'nvG'nv|0). (The quark masses are neglected.) The next in dimension is the d = 6 operator, corresponding to the v.e.v. of the product of 4-quark fields, O6 = (0|qTq • qPq|0), q = u,d. The contribution of this operator has no loop integration (Fig. 1c), C6 ~ 1/p2. The contribution of the other d = 6 operator, proportional to the product of three gluonic fields, has two loop integration and is strongly suppressed numerically. The corresponding diagrams (up to d = 8) are shown in Fig. 1. The construction of OPE for chirality-violating structure n2(p2) is similar. The lowest dimension operator is

where a, b, c, are the color indeces, eabc is the unit antisymmetric tensor, C is charge conjugation matrix. (The argumentation, why this form of the current is the most suitable for determination of proton mass and other proton properties, was given in [8, 11].) The general form of n(p) is

where p = The first term in (7) conserves

chirality, while the second violates chirality. The OPE is written separately for chirality-conserving and chirality-violating structures:

In the right-hand side of (10) the model of hadronic spectrum is used:

It is assumed that the resonance is separated from continuum by the gap, the continuum is equal to the asymptotics of ni(p2) and starts at continuum threshold s0. The equality

In case of proton the resonance contribution is equal to:

and vp is the proton spinor. Equation (12) is not well defined because of divergences at the left-hand side and subtraction terms at the right-hand side. In order to kill both and improve the convergence of OPE and dispersion-relation representation SVZ suggested to apply the Borel transformation to Eq. (12). Put Q2 = = -p2. Borel transformation of the function f (Q2) is defined by:

If f (Q2) can be represented by dispersion relation —

Collecting all terms of OPE, represented by diagrams of Figs. 1 and 2, and applying the Borel transformation to (12), we get the sum rules for photon

Borel transformation improves the convergence of OPE, since