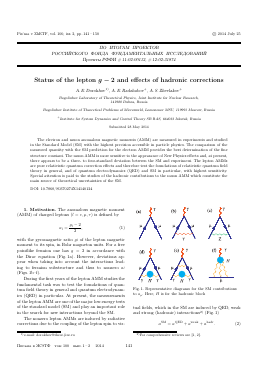 Status of the lepton g — 2 and effects of hadronic corrections

The electron and muon anomalous magnetic moments (AMM) are measured in experiments and studied in the Standard Model (SM) with the highest precision accessible in particle physics. The comparison ol the measured quantity with the SM prediction for the electron AMM provides the best determination ol the fine structure constant. The muon AMM is more sensitive to the appearance of New Physics effects and, at present, there appears to be a three- to four-standard deviation between the SM and experiment. The lepton AMMs are pure relativistic quantum correction effects and therefore test the foundations of relativistic quantum field theory in general, and of quantum electrodynamics (QED) and SM in particular, with highest sensitivity. Special attention is paid to the studies of the hadronic contributions to the muon AMM which constitute the main source of theoretical uncertainties of the SM.

1. Motivation. The anomalous magnetic moment (AMM) of charged leptons (I = r) is defined by

with the gyromagnetic ratio gi of the lepton magnetic moment to its spin, in Bohr magneton units. For a free pointlike fermion one has g = 2 in accordance with the Dirac equation (Fig. la). However, deviations appear when taking into account the interactions leading to fermion substructure and thus to nonzero o; (Figs. lb-f).

During the first years of the lepton AMM studies the fundamental task was to test the foundations of quantum field theory in general and quantum electrodynamics (QED) in particular. At present, the measurements of the lepton AMM are one of the major low-energy tests of the standard model (SM) and play an important role in the search for new interactions beyond the SM.

Fig. 1. Representative diagrams for the SM contributions to a.,,. Here, H is for the hadronic block

tual fields, which in the SM are induced by QED, weak and strong (hadronic) interactions2' (Fig. 1)

The electron and muon AMMs are among the most accurately measured quantities in elementary particle physics. Today, the electron AMM serves as the best quantity to determine the fine structure constant with the highest accuracy. At the same time, for aM, there is a deviation at the level of 3-4 a of the SM prediction from the measured value. Even if this does not give a clear indication for the existence of New Physics, it allows us to provide stringent constraints on the parameters of hypothetical models.

The outline of this paper is as follows. In Section 2, we briefly report on the status of the electron AMM. In Section 3, the latest experimental and theoretical results on aM are presented. In Section 4, we review the most problematic theoretical input coming from the contribution due to the hadronic light-by-light (HLbL) scattering mechanism. Section 5 is devoted to some technical details of the calculations of the HLbL within the nonlocal chiral quark model (NxQM). Conclusions are presented in the last Section.

2. Electron AMM and fine structure constant. In 2008, the unique measurement by the Harvard group of Prof. G. Gabrielse, using a one-electron quantum cyclotron, obtained the electron AMM with unprecedented accuracy [3]

This result leads to the determination of the fine structure constant a with the extraordinary precision [4, 5]

that is in agreement with the measurement (3).

3. Muon AMM: experiment vs theory. In 2006, there were published the results on aM measurements by the E821 Collaboration at Brookhaven National Laboratory (BNL) [9]. The combined result, based on nearly equal samples of positive and negative muons, is4'

This exiting result is still limited by the statistical errors and proposals to measure aM with a fourthfold improvement in accuracy have been proposed at Fermilab (USA) [10] and J-PARC (Japan) [11]. A future experiments plan to reduce the present experimental error to a precision of 0.14 ppm.

The accuracy of these calculations is enough for any planed experiments in new future.

In general, the weak contributions (Fig. lc) are small due to suppressing factor a/n ■ m /Ml ~ 10~9, where Mw is a typical mass of heavy Z, and H bosons. The one- and two-loop evaluations indicate that they are known with a sufficiently high accuracy [13, 14]

where the remaining theory error comes from the unknown three-loop contributions and dominantly from light hadronic uncertainties in the second-order elec-troweak diagrams with quark triangle loops. The most important feature of these new estimates, that significantly increase the theoretical precision, is to use the LHC result on the Higgs-boson mass measured by ATLAS [15, 16] and CMS [17, 18] Collaborations.

Strong (hadronic) interaction produces relatively small contributions to aM, however they are known with an accuracy comparable to the experimental uncertainty in (6). In leading in a orders, these contributions can be separated into three terms

In (9), a^ is the leading in a contribution due to the hadron vacuum polarization (HVP) effect in the internal photon propagator of the one-loop diagram (Fig. Id),

is the next-to-leading order contribution related to iteration of HVP (Fig. le). The last term is not reduced to HVP iteration and it is due to the hadronic light-by-light (HLbL) scattering mechanism (Fig. If).

Hadronic contributions in (9) are determined by effects dominated by long distance dynamics, the region where the methods of perturbation theory of Quantum Chromodynamics (QCD) do not applicable and one must use less reliable nonperturbative approaches. However, in case of HVP, using analyticity and unitarity (the optical theorem) a^vp can be expressed as the spectral representation integral [19]

which is a convolution of the hadronic spectral function

with the known from QED kinematical factor

where mM is the muon mass. The QED factor is sharply peaked at low invariant masses t and decreases mono-tonically with increasing t. Thus, the integral defining a^vp is sensitive to the details of the spectral function

Py'(t) at low t. At present there are no direct theoretical tools that allow one to calculate the spectral function at low t with required accuracy. Fortunately, pv (t) is related to the total e+e~ —> 7* —> hadrons cross-section a(t) at center-of-mass energy squared t by

and this fact is used to get quite accurate estimate of a^vp. The most precise recent phenomenological evaluations of a^vp, using recent e+e~ —> hadrons data, provide the results

In addition, data on inclusive decays of the r-lepton into hadrons are used to replace the e+e~ data in certain energy regions. This is possible, since the vector current conservation law relates the 1=1 part of the electromagnetic spectral function to the charged current vector spectral function measured in r —> v +non-strange hadrons (see, i.e., [22]). All these allow one to reach a substantial improvement in the accuracy of the contribution from the HVP during the last decade.

Similar, the dispersion relation approach and the same phenomenological input lead to the estimate of the next-to-leading hadronic contribution (Fig. le) [21]

Thus, the HVP and next-to-leading order contribution related to HVP are known with an accuracy better than 1 per cent.

In near future it is expected that new and precise measurements from CMD3 and SND at VEPP-2000 in Novosibirsk, BES III in Beijing and KLOE-2 at DAFNE in Frascati allow to sig