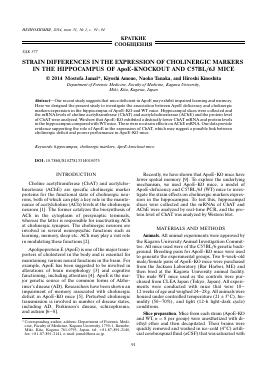 STRAIN DIFFERENCES IN THE EXPRESSION OF CHOLINERGIC MARKERS IN THE HIPPOCAMPUS OF ApoE-KNOCKOUT AND C57BL/6J MICE © 2014 Mostofa Jamal*, Kiyoshi Ameno, Naoko Tanaka, and Hiroshi Kinoshita

Abstract—Our recent study suggests that mice deficient in ApoE may exhibit impaired learning and memory. Here we designed the present study to investigate the association between ApoE deficiency and cholinergic markers expression in the hippocampus of ApoE-KO and WT mice. Hippocampal slices were collected and the mRNA levels of choline acetyltransferase (ChAT) and acetylcholinesterase (AChE) and the protein level of ChAT were analyzed. We show that ApoE-KO exhibited a distinctly lower ChAT mRNA and protein levels in the hippocampus compared with WT mice. There were no strain effects on AChE mRNA. Our data provide evidence supporting the role of ApoE in the expression of ChAT, which may suggest a possible link between cholinergic deficit and poorer performance in ApoE-KO mice.

Apolipoprotein E (ApoE) is one of the major transporters of cholesterol in the body and is essential for maintaining various neural functions in the brain. For example, ApoE has been suggested to be involved in alterations of brain morphology [3] and cognitive functioning, including attention [4]. ApoE is the major genetic source of the common forms of Alzheimer's disease (AD). Researchers have been shown an impairment of memory associated with cholinergic deficit in ApoE-KO mice [5]. Perturbed cholinergic transmission is involved in number of disease states, including AD, Parkinson's disease, schizophrenia, and autism [6—8].

Recently, we have shown that ApoE-KO mice have lower spatial memory [9]. To explore the underlying mechanism, we used ApoE-KO mice, a model of ApoE-deficiency and C57BL/6J (WT) mice to investigate the strain effects on cholinergic markers expression in the hippocampus. To test this, hippocampal slices were collected and the mRNAs of ChAT and AChE were analyzed by real-time PCR, and the protein level of ChAT was analyzed by Western blot.

Animals. All animal experiments were approved by the Kagawa University Animal Investigation Committee. All mice used were of the C57BL/6 genetic background. Breeding pairs for ApoE-KO mice were used to generate the experimental groups. Two 8-week-old male/female pairs of ApoE-KO mice were purchased from the Jackson Laboratory (Bar Harbor, ME) and then bred at the Kagawa University animal facility. The male WT mice used as the controls were purchased from CLEA Japan (Tokyo, Japan). All experiments were conducted with mice that were 10— 12 weeks of age and weighed 24—28 g. All animals were housed under controlled temperature (21 ± 3°C), humidity (50-70%), and light (12-h light-dark cycle) conditions.

Slice preparation. Mice from each strain (ApoE-KO and WT, n = 8 per group) were anesthetized with di-ethyl ether and then decapitated. Their brains were quickly removed and washed in ice-cold (4°C) artificial cerebrospinal fluid (aCSF) that was saturated with

carbogen gas (95% O2, 5% CO2). The aCSF consisted of 124 mM NaCl, 21 mM NaHCO3, 3 mM KCl, 1.25 mM NaH2PO4, 1.6 mM CaCl2, 1.8 mM MgSO4, and 10 mM glucose at pH 7.4. Coronal brain slices (500 ^m thick) through the hippocampus were cut with a microslicer (DTK-1000, Dosaka, Japan) while immersed in the ice-cold aCSF. The slice was then dip immediately to an oxygenated aCSF solution. Using a standard microscope for visualization, the hippocampus from one half-brain was removed and immediately transferred to a tube containing 0.5 mL of Trizol (In-vitrogen) for RNA. The tissue samples were subsequently homogenized with Polytron (PT 2500E, Switzerland), and an additional 0.5 mL of Trizol was added for a total sample volume of1.0 mL. The hippocampus from other half-brain was collected into a 1.5 mL tube for protein and then stored at —70°C until assayed.

Real-time PCR. RNA was isolated by the phenolchloroform method and then quantified using a spectrophotometer (GE healthcare biosciences AB, Uppsala, Sweden). The mean 260/280 absorbance ratio was 1.82 ± 0.05. A 5-^g aliquot of total RNA from each tissue sample was used as a template for reverse transcription and was primed with 1 ^L of oligo (dT)18 primer (Clontech, Takara Bio Com., Japan); an appropriate amount of diethyl pyrocarbonate (DEPC)-treated water was added to a final volume of 13.5 ^L. The synthesis reaction contained 4 ^L of 5x reaction buffer, 1 ^L of 10 mM dNTP-mix, 0.5 ^L of 40 U/^L recombinant RNase inhibitor, and 1 ^L of 200 U/^L MMLV reverse transcriptase in a final volume of 20 ^L. The total RNA was preincubated for 2 min at 70°C prior to cDNA synthesis, and the reverse transcription reaction was performed for 60 min at 42°C followed by 5 min at 94°C. The following primer sequences were used to amplify the ChAT, AChE and an internal standard P-actin: P-actin forward primer 5'-AGCCATGTACGTAGCCATCC-3', reverse primer 5'-TTTGATGTCACGCACGATTT-3', ChAT forward primer 5'-GGTGGCCCAGAAGAG-CAGTATC-3', reverse primer 5'-ATTGGAGGCAG-GCGTTCATC- 3' and AChE forward primer 5'-TACTCTGGACGAGGCG-3', reverse primer 5' - CGGTCGTATTATATCCCAGC- 3'. A SYBR Green master mix (Roche, USA) was used to measure the accumulation of PCR product for each reaction. The PCR amplification protocol consisted of one cycle at 95°C for 10 min followed by 45 cycles at the following parameters: 40 s of denaturation at 95°C, 40 s of annealing at 60° C and 1 min 20 s of extension at 72°C using the ABI Prism 7700 Sequence Detection System driven by the ABI prism SDS version 9.1 software (Applied Biosystems). The relative expression of the genes of interest was normalized to the mean of the P-actin (internal control) mRNA that was amplified along with each sample.

Western blot. Hippocampus was homogenized with Polytron in 0.5 mL of 20 mM ice-cold Tris-HCl (pH 7.4) containing 0.32 mM sucrose. An additional 0.5 mL of Tris-HCl was added for a total sample volume of 1.0 mL. After centrifugation at 10000 g at 4°C for 15 min, the supernatant was used for Western blot analyses. The protein content of the supernatant was determined by Bradford (Bio-Rad, Hercules, CA) using bovine serum albumin (Sigma Chemical, St. Louis, MO) as the standard. Samples were run on 10% SDS PAGE with molecular weight markers (BioRad), then transferred electrophoretically to PVDF membranes. Membranes were incubated with primary antibodies against ChAT (1 : 500, Chemicon International Inc., Temecula, CA, USA) and then with corresponding horseradish peroxidase-linked secondary antibodies. The band intensities were evaluated by an LAS-1000plus lumino-imaging analyzer (Fujix).

Statistics. All values were expressed as the mean ± standard error of the mean (SEM); values of P < 0.05 were considered significant. The student's t-test was used to assess significant differences between the two strains.

Figure shows a comparison of ChAT and AChE mRNA (A) and ChAT protein (B) between ApoE-KO and WT mice. Aldh2-KO mice exhibited significantly lower levels of ChAT mRNA (P < 0.001) and protein (P < 0.01) compared to WT mice. No statistically significant strain differences of AChE were observed in the hippocampus.

Our recent study indicates that ApoE-KO mice have lower spatial memory [9]. To explore this issue, we compared the levels of hippocampal cholinergic markers expression in ApoE-KO and WT mice. The present results demonstrated that ApoE-KO mice exhibited significantly lower ChAT expression at the mRNA and protein levels than WT mice, with no difference in AChE mRNA. Many researchers have compared AChE between ApoE-KO and WT mice in the regions of the brain and they showed similar patterns of AChE staining between these two strains of mice [10, 11]. Our finding of low level of ChAT mRNA in ApoE-KO mice was consistent with the previous study that reported that ChAT activity was markedly lower in the hippocampus and frontal cortex of the ApoE-KO mice than in the corresponding brain areas of the WT mice [5]. The synaptic densities of cholinergic and other neural projections in specific brain regions ofApoE-KO mice are markedly lower [12]. Given some previous findings in terms of cholinergic function in ApoE-KO mice [12—13], we have hypothesized that the deficit in cognitive performance observed in the ApoE-KO mice could be due to a selective deterioration of ChAT expression.

STRAIN DIFFERENCES IN THE EXPRESSION OF CHOLINERGIC MARKERS

Strain effects on ChAT and AChE mRNA (a) and ChAT protein (b). *p < 0.001 and fp < 0.01 versus WT mice. Data represent the means ± SE. ß-Actin was used as an internal control for mRNA and protein expression.

ApoE has been suggested to be a risk factor for AD. Several in vitro studies on glutamate receptors have pr