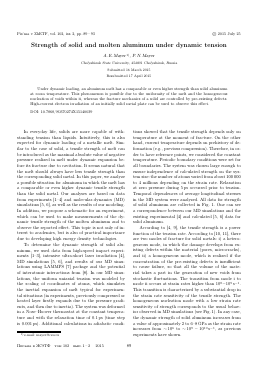 Strength of solid and molten aluminum under dynamic tension

Under dynamic loading, an aluminum melt has a comparable or even higher strength than solid aluminum at room temperature. This phenomenon is possible due to the uniformity of the melt and the homogeneous nucleation of voids within it, whereas the fracture mechanics of a solid are controlled by pre-existing defects. High-current electron irradiation of an initially solid metal plate can be used to observe this effect.

In everyday life, solids are more capable of withstanding tension than liquids. Intuitively, this is also expected for dynamic loading of a metallic melt. Similar to the case of solid, a tensile strength of melt can be introduced as the maximal absolute value of negative pressure realized in melt under dynamic expansion before its fracture due to cavitation. It seems natural that the melt should always have less tensile strength than the corresponding solid metal. In this paper, we analyze a possible situation for aluminum in which the melt has a comparable or even higher dynamic tensile strength than the solid metal. Our analyses are based on data from experiments [1-4] and molecular-dynamics (MD) simulations [5, 6], as well as the results of our modeling. In addition, we propose a schematic for an experiment, which can be used to make measurements of the dynamic tensile strength of the molten aluminum and to observe the reported effect. This topic is not only of interest to academics, but is also of practical importance due to developing high energy density technologies.

To determine the dynamic strength of solid aluminum, we used data from high-speed impact experiments [1-3], intensive ultra-short laser irradiation [4], MD simulations [5, 6], and results of our MD simulations using LAMMPS [7] package and the potential of interatomic interactions from [8]. In our MD simulations, the uniform uniaxial tension was modeled by the scaling of coordinates of atoms, which simulates the inertial expansion of melt typical for experimental situations (in experiments, previously compressed or heated layer firstly expands due to the pressure gradients, and then due to inertia). The system was deformed in a Nose-Hoover thermostat at the constant temperature and with the relaxation time of 0.1 ps (time step is 0.001 ps). Additional calculations in adiabatic condi-

tions showed that the tensile strength depends only on temperature at the moment of fracture. On the other hand, current temperature depends on prehistory of deformation (e.g., previous compression). Therefore, in order to have reference points, we considered the constant temperature. Periodic boundary conditions were set for all boundaries. The system was chosen large enough to ensure independence of calculated strength on the system size: the number of atoms varied from about 100 000 to 4 millions depending on the strain rate. Relaxation at zero pressure during 5ps occurred prior to tension. Temporal dependences of average longitudinal stresses in the MD system were analyzed. All data for strength of solid aluminum are collected in Fig. 1. One can see a correspondence between our MD simulations and the existing experimental [4] and calculated [5, 6] data for solid aluminum.

According to [4, 9], the tensile strength is a power function of the tension rate. According to [10, 11], there are two modes of fracture for solid metals: i) a heterogeneous mode, in which the damage develops from existing defects within the material (pores, microcracks), and ii) a homogeneous mode, which is realized if the concentration of the pre-existing defects is insufficient to cause failure, so that all the volume of the material takes a part in the generation of new voids from stochastic fluctuations. The transition from mode i to mode ii occurs at strain rates higher than 108 —109 s-1. This transition is characterized by a substantial drop in the strain rate sensitivity of the tensile strength. The homogeneous nucleation mode with a low strain rate sensitivity of strength corresponds to the usual behavior observed in MD simulations (see Fig. 1). In any case, the dynamic strength of solid aluminum increases from a value of approximately 2 to 6-8 GPa as the strain rate increases from ~ 106 to ~ 109 — 1010s_1, as previous experiments have shown.

For super-high strain rates (>108s the tensile strength of the melt at 1000 Iv is determined from the results of our MD simulations (see Fig. 1). The LAMMPS [7] package is also used with the potential of interatomic interactions from [8]. To analyze the tensile strength of the aluminum melt in a wider range of strain rates, we used a model [12] based on the classical theory of a metastable liquid [13]. The homogeneous nucleation and growth of spherical voids in the melt at negative pressures are considered in this model. The growth of the voids is described by the Rayleigh-Plesset equation [14] and the thermal fluctuations [15] provide the nucleation for super-critical voids, which are able to grow at a given negative pressure. The maximum absolute value of the negative pressure is when the growth rate of the volume of the voids is equal to the growth rate of the volume of the melt. This maximum value is the

tensile strength of the melt at the given strain rate and temperature. The calculated strain rate dependence of the tensile strength of the aluminum melt at 1000 Iv is shown in Fig. 1. In these calculations, we take into account the size distribution of the voids (all voids are divided into generations according to the time of nucleation). We used data [16] for surface tension, data [17] on viscosity of the melt, and the wide-range equation of state [18] to determine the thermodynamic parameters of the melt. One can see a close fit between the model [12] and MD in the range of strain rates > 108 s_1, where MD simulation makes sense.

• 106s_1, the melt becomes more durable than the monocrystalline aluminum. This phenomenon is due to a weak rate sensitivity of the strength of the melt in the homogeneous nucleation mode, whereas the solid metal transitions to the heterogeneous fracture mode and its rate sensitivity sharply increases. Therefore, a higher melt strength may be achieved if the homogeneous nucleation mode occurs in the melt over the strain rate range from 106 to 108s_1.

In order to argue our idea, Fig. 1 also presents MD simulation results of uniaxial tension with the constant strain rate of aluminum with high concentration (5 000 and 40 000 per cubic micrometer) of small pores (with diameter of 5 nm). Simulation conditions were similar to the cases of solid aluminum without defects and aluminum melt considered before. Initial pore and the void formed in the course of deformation are imaged in Fig. 2 (the program Ovito [19] was used for visualization). One can see a sharp drop of the tensile strength with the strain rate decrease in the case of solid metal with pores in Fig. 1. Difference in strength of perfect monocrystal and porous solid aluminum grows up with the strain rate decrease. The strength of our models of porous material becomes less than the melt strength at the strain rates < 5 • fO10 and < 1 • 1010 s_1 depending on concentration of pores. It means that softening due to the presence of defects (pores) is more substantial than the thermal softening. On the other hand, one can see in Fig. f the transition to homogeneous mode of fracture for porous aluminum with concentration of pores of 5 000 per cubic micrometer at the strain rate of 1011 s_1 - the tensile strengths of porous and perfect aluminum coincide at such strain rate. Calculations show that a decrease

Fig. 2. (Color online) Initial pore and void formed at late stage of deformation; aluminum, temperature is 300 K, strain rate is 109 s_1. Color corresponds to the value of centro-symmetry parameter; visualization with use of Ovito [19]

of the pore concentration leads to a shift of the considered strength drop in the direction of smaller strain rates. Therefore, the transition between homogeneous and heterogeneous modes of fracture accompanied by the strength drop substantially depe