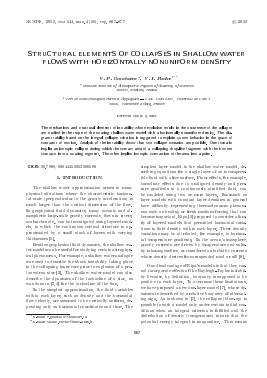 The mechanisms and structural elements of instability whose evolution results in the occurrence of the collapse are studied in the scope of the rotating shallow water model with a horizontally nonuniform density. The diagram stability based on the integral collapse criterion is suggested to explain system behavior in the space of constants of motion. Analysis of the instability shows that two collapse scenarios are possible. One scenario implies anisotropic collapse during which the contact area of a collapsing drop-like fragment with the bottom contracts into a rotating segment. The other implies isotropic contraction of the area into a point.

The shallow water approximation arises in many physical situations where the characteristic horizontal scale (perpendicular to the gravity acceleration) is much larger than the vertical dimension of the flow. In geophysical fluid dynamics, many oceanic and atmospheric large-scale gravity currents, flows in rivers, avalanches etc., can be investigated using layered models, in which the continuous vertical structure is approximated by a small stack of layers with varying thicknesses [1].

In the simplest approximation, the fluid variables within each layer, such as density and the horizontal flow velocity, are assumed to be vertically uniform, depending only on horizontal coordinates and time. The

simplest layer model is the shallow water model, describing equations for a single layer of an incompressible fluid with a free surface. Finer effects, for example, baroclinic effects due to unaligned density and pressure gradients in a continuously stratified fluid, can be modeled using two or more layers. Inasmuch as layer models with constant layer densities in general have difficulty representing thermodynamic phenomena such as heating or fresh medium forcing that can become important, Ripa [5] proposed to consider a family of layered models that permitted horizontal variations in fluid density within each layer. These density variations may be attributed, for example, to horizontal temperature gradients. In the ocean/'atmosphere, gravity currents are driven by temperature and salinity inhomogeneities, or considered as turbidity currents whose density derives from suspended mud or silt [6].

One disadvantage of Ripa s models is that they cannot incorporate effects of the Raylcigh Taylor instability because, by definition, buoyancy is supposed to be positive in each layer. To overcome these limitations, we have proposed a new one-layer model [7], whose dynamics is described by a relative buoyancy of alternating sign. As is shown in [7], the collapse (blow-up) is possible in such a model only under certain initial conditions when an integral criterion is fulfilled and the distribution of density (temperature) is such that the potential energy integral is nonpositive. This means

that the mechanism responsible for initiating the collapse is the Rayleigh Taylor instability.

Undoubtedly, the collapse sooner or later leads to small-scale processes ignored in the simplified model [7]. However, it is extremely unlikely that in a more complete dissipation-free model, the solutions change so dramatically that collapses are completely eliminated. In particular, as shown in [8, 9], accounting for the nonlinear dispersion duo to nonhydrostatic pressure effects does not cancel collapses in shallow water models. Even if the collapsing solutions are eliminated or, what is more probable, the self-similarity is lost, such solutions are still of a certain value because they can be regarded as initial or intermediate asymptotes [10].

Paper [7] was limited to the study of only integral criteria and power laws of collapses. The obtained results therefore turn out to be incomplete because the problem of finding the space structure for self-similar solutions remained beyond the scope of that work. Hero, wo intend to fill this gap. By analogy with [8,9,11 13], it is natural to expect that development of a large-scale instability in the model discussed below also leads to disintegration of the strongly perturbed flow and to the occurrence of drop-like fluid fragments. It is these formations that play the role of structural elements from which it is possible to compile an overall picture of the instability up to the turbulence stage. Because drop-like fragments produce space time singularities responsible for power-law tails in the short-wave range of the spectrum, the study of structural elements provides the key to understanding strong turbulence [14, 15].

This article is organized as follows. In Sec. 2, we construct the minimal model and formulate the governing equations in the shallow water approximation with horizontal density gradients. In Sec. 3, we discuss the rigorous integral criterion for isotropic collapse. We assume that this phenomenon arises at the final stage when the development of the instability has led to disintegration of strongly perturbed flows. After the formation of localized fluid fragments, a time conies when finite-time singularities form. The self-similar scenarios of collapses and their corresponding structural elements are considered in Sec. 4 6. We summarize our results in Sec. 7.

pendix for more details). This model supposes that two incompressible fluids with densities g = const and g + g'(xi,x2-t) are separated by the surface s = = !)(■>■ \ ••'••j - /) and contained between two rigid parallel planes i = 0 and i = / under the action of gravity g. If the horizontally nonuniform density jump g' between the fluids is small and the lower layer is sufficiently thin, such that the inequalities q'/q -C 1 and h/I -C 1 hold, then the shallow water approximation leads to the equations

These equations describe the depth-averaged flow in the lower layer, and our notation is as follows: Xi = (xi, x2) are the Cartesian coordinates; &i = 0/dt, di = d/dxf. eik is the unit antisymmetric tensor, ('ii = «22 = 0, ei2 = —621 = 1; ui = («1, «2) arc horizontal components of the depth-averaged velocity in the layer; and h is its thickness. Because ii is the constant angular velocity with which the layer is rotating about the vertical axis, the term 20eikuk describes the Coriolis acceleration components. The field variable r = gg'/g has the meaning of the relative buoyancy and can therefore take any sign.

In the cases where density variations are produced only by temperature ones, AT, and are linearly connected, the relative buoyancy can be computed as r = —// I AT. where ß is thermal expansion coefficient. This parameterization allows studying the heating and cooling effects in shallow water models [16, 17].

We note that in the case r = 1, Eqs. (1) (3) reduce to the usual shallow water equations. The other limit case r = — 1 leads to the so-called "inverted" shallow water model describing the layer of a heavy fluid bounded above by a solid slab. The equilibrium in the unperturbed state is provided by the pressure of a light fluid or a gas lying below. Examples of using the inverted shallow water model in various applications are presented in [18]. Understandably, such equilibrium is unstable and short-lived. The heavier fluid eventually falls down to the bottom. But initial and intermediate stages of the instability, when the system is far from the final state, are of the utmost importance. Their study-provides a way for understanding the processes of vertical mixing in many physical applications, including atmospheric and ocean science.

There is one more useful interpretation of Eqs. (1) (3) as equations of hydrodynamic type derived from first principles (conservation laws). As

can bo verified directly, if the variables h and r are regarded as densities of IIlclSS and entropy, Eqs. (1) (3) follow from the Hamiltonian formulation [19, 20] of two-dimensional motion of a nonbarotropic rotating gas with the Hamiltonian

where e(h,r) is the internal energy density, which in our case is given by e = h2r/2, and dx = dxidx2-In terms of the variables h, r, and

(referred to as the liydrodynamic momentum density), nontrivial Poisson brackets defining the dynamics for the given family of models take the form

Primed field variables imply the dependence on the primed spatial coordinates, and 6 = 6(x — x') is the Dirac delta function.

In addition, any system with Poisson brackets (4), (5) automatically preserves the integrals (Casimirs)

for any function F(t). Among them, we note the conservation law

As we see in what follows, this quantity together with o