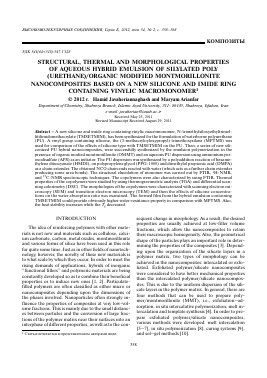 Abstract — A new silicone and imide ring containing vinylic macromonomer, N-trimethylsiloxyethyltrimel-litilimidomethacrylate (TMSETMIM), has been synthesized for the formulation of waterborne polyurethane (PU). A vinyl group containing silicone, the (3-methacryloyloxypropyl) trimethoxysilane (MPTMS) was used for comparison of the effects of silicone type with TMSETMIM on the PU. Then, a series of new sili-conized PU hybrid nanocomposites, were successfully synthesized by the emulsion polymerization in the presence of organic modied montmorillonite (OMMT) and an aqueous PU dispersion using ammonium per-oxodisulfate (APS) as an initiator. The PU dispersion was synthesized by a polyaddition reaction of hexame-thylene diisocyanate (HMDI), on polypropylene glycol (PPG-1000) and dimethylol propionic acid (DMPA) as a chain extender. The obtained NCO chain ends reacted with water (which acts as a further chain extender producing some urea bonds). The structural elucidation of monomer was carried out by FTIR, 1H-NMR, and 13C-NMR spectroscopic techniques. The copolymers were also characterized by using FTIR. Thermal properties of the copolymers were studied by using thermogravimetric analysis (TGA) and differential scanning calorimetry (DSC). The morphologies of the copolymers were characterized with scanning electron microscopy (SEM) and transition electron microscopy (TEM) and then the effects of silicone concentrations on the water absorption ratio was examined. The formed film from the hybrid emulsion containing TMSETMIM could provide obviously higher water-resistance property in comparison with MPTMS. Also, the heat stability increases while the Tg decreased.

The idea of reinforcing polymers with other materials is not new and materials such as cellulose, calcium carbonate, carbon, metal oxides, montmorillonite and various forms of silica have been used in this role for quite some time. Just as in other fields of nanotech-nology, however, the novelty of these new materials is to what scale by which they occur. In order to meet the rising demands of applications, hybrids of inorganic "functional fillers" and polymeric materials are being constantly developed so as to combine their beneficial properties or to induce new ones [1, 2]. Particulate-filled polymers are often classified as either micro or nanocomposites depending upon the dimensions of the phases involved. Nanoparticles often strongly influence the properties of composites at very low-volume fractions. This is mainly due to the small distances between particles and the conversion of large fractions of the polymer matrix near their surfaces into an interphase of different properties, as well as to the con-

Polyurethanes (PU) represent extraordinarily versatile polymeric materials, which can be tailored to meet the highly diversified demands of modern technology such as coatings, adhesives, and composites [11]. As waterborne polymer systems are environmentally-friendly, they have been widely used in coatings and adhesives. Properties of polyurethane are modified either by varying polyurethane microstructures or by dispersing inorganic and organic fillers within the polyurethane continuous matrix. A wide variety of fillers, including clay and wollastonites or montmorillo-nite, are being applied to polyurethane formulations in order to reduce costs and to reinforce the polyurethane matrix. Many papers have described the use of special intercalated organophilic clays in PU matrix and a few researchers have reported on morphological studies and improvements in the properties of aqueous aliphatic PU nanocomposites have been determined [12—15]. In the present study, the aim is to further improve the properties of new silylated aqueous PU by reinforcing organic modified montmorillonite via exfoliated method.

In a three-neck flask equipped with a teflon-stirrer and a thermometer and purged with nitrogen gas at a constant flow rate, 1.83 g (0.03 mol) of ethanolamine was added gradually into the solution of trimellitic anhydride 5.76 g (0.03 mol) in 50 ml of DMF and the mixture was stirred two h in a water bath to obtain a clear amic acid solution. A mixture of 5.5 g phosphorus pentaoxide, 2.5 g sulfuric acid and 50 ml DMF was then added drop-wise to the amic acid solution, al-

The organic modified montmorillonite (OMMT) was prepared using the following procedure [16]. 5g of MMT and 50 ml distilled water were put into a three-necked flask. 1.4 ml sodium silicate was added to ad-

just pH to 11. The mixture was allowed to stand for 1 d