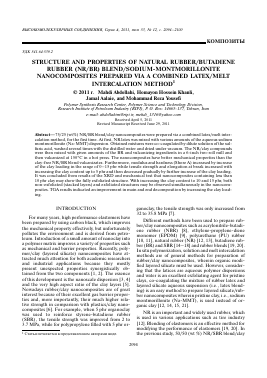 Abstract—75/25 (wt%) NR/BR blend/clay nanocomposites were prepared via a combined latex/melt intercalation method, for the first time. At first, NR latex was mixed with various amounts of the aqueous sodium montmorillonite (Na-MMT) dispersion. Obtained mixtures were co-coagulated by dilute solution of the sulfuric acid, washed several times with the distilled water and dried under vacuum. The NR/clay compounds were then mixed with given amounts of the BR and vulcanizing ingredients in a 6-inch two-roll mill and then vulcanized at 150°C in a hot press. The nanocomposites have better mechanical properties than the clay-free NR/BR blend vulcanizates. Furthermore, modulus and hardness (Shore A) increased by increase of the clay loading in the range of 0—15 phr while tensile strength and elongation at break increased with increasing the clay content up to 5 phr and then decreased gradually by further increase of the clay loading. It was concluded from results of the XRD and mechanical test that nanocomposites containing less than 10 phr clay may show the fully exfoliated structure. With increasing the clay content to 10 and 15 phr, both non-exfoliated (stacked layers) and exfoliated structures may be observed simultaneously in the nanocomposites. TGA results indicated an improvement in main and end decomposition by increasing the clay loading.

For many years, high performance elastomers have been prepared by using carbon black, which improves the mechanical property effectively, but unfortunately pollutes the environment and is derived from petroleum. Introduction of a small amount of nanoclay into a polymer matrix improves a variety of properties such as mechanical and barrier properties. Recently, polymer/clay (layered silicate) nanocomposites have attracted much attention for both academic researchers and industrial applications because they mostly present unexpected properties synergistically obtained from the two components [1, 2]. The essence of this development is the nanoscale dispersion [3, 4] and the very high aspect ratio of the clay layers [5]. Nowadays rubber/clay nanocomposites are of great interest because of their excellent gas barrier properties and, more importantly, their much higher relative strength in comparison with plastics/clay nanocomposites [6]. For example, when 5 phr organoclay was used to reinforce styrene-butadiene rubber (SBR), the tensile strength was improved from 2 to 3.7 MPa, while for polypropylene filled with 5 phr or-

NR is an important and widely used rubber, which is used in various applications such as tire industry [12]. Blending of elastomers is an effective method for modifying the performance of elastomers [19, 20]. In the previous study, 50/50 (wt %) NR/SBR blend/clay

nanocomposites were prepared via mixing the latex of a 50/50 NR/SBR blend with aqueous clay (Na-MMT) dispersion and co-coagulating the mixture [19]. Nanocomposites containing less than 10 phr clay showed the fully exfoliated structure. With increasing the clay content to 10 phr, both non-exfoliated (stacked layers) and exfoliated structures were observed in the nanocomposites. Mechanical properties of NR/SBR blend/clay nanocomposites were better than clay-free NR/SBR blend vulcanizate. Furthermore, tensile strength, elongation at break and hardness (Shore A) increased with increasing the clay content up to 6 phr and then remained almost constant.

To the best of our knowledge, there is only one report in the literature regarding to the preparation of NR/BR blend (60/40 wt%)/clay nanocomposites containing various amounts of organoclay (Cloisite 15A) by melt intercalation method [20]. Results indicated that NR and BR molecules have intercalated the interlayers of organoclay which resulted in the increase of interlayer distance. Tensile strength, modulus, hardness, abrasion resistance and tear strength increased with the increase of organoclay content while the elongation at break decreased moderately. The rate of thermal degradation of nanocomposites greatly decreased with incorporation of 5 phr organoclay and further loading of organoclay did not significantly affect this property.

In the present work, NR/BR blend (75/25 wt%)/clay nanocomposites were prepared for the first time by a combined latex/melt intercalation method. At first, NR latex was mixed with various amounts of aqueous dispersion of sodium montmoril-lonite (Na-MMT). The obtained mixture was co-coagulated by dilute solution of sulfuric acid, washed with distilled water several time and dried under vacuum. The NR/BR (75/25 wt%) blend/clay nanocomposites were prepared by mixing the NR/clay (Na-MMT) compounds with given amounts of butadiene rubber (BR) and vulcanizing ingredients. Structure and various properties of the nanocomposites were studied in detail.

Recipe for vulcanization of NR/BR/Na-MMT compounds

75/25 (wt%) NR/BR blend/clay nanocomposites were prepared via combined latex/melt intercalation method. At first, clay (Cloisite Na+) was dispersed in deionized water with vigorous stirring by a special type of stirrer (Polytron, Switzerland) at a concentration of 2 wt% and an aqueous suspension of clay was obtained. Then, a given amount of NR latex was added into the aqueous clay suspension and stirred for 30 min. Finally, the mixture was co-coagulated by dilute solution of sulfuric acid (2%), washed with water several times until the pH become about 7 and dried at 80°C for 24 h under reduced pressure. The NR/clay mixtures were then obtained.

To obtain the vulcanized NR/BR blend and its nanocomposites, the above-mentioned mixtures as well as the clay-free NR were mixed with given amounts of BR and curing ingredients according to the recipe in table in a 6-inch two-roll mill. Firstly, NR and NR/clay mixtures containing various amount of Na-MMT were mixed with BR and then compounded with DOP, ZnO and stearic acid at 60—70°C. Then, accelerators, sulfur and antioxidant were added respectively to the mixture. The obtained rubber compounds were vulcanized in a standard mold (2 mm x x 110 mm) at 20 ton pressure and 150°C for the optimum cure time (t90) determined by an oscillating disk rheometer. Thus, vulcanizates of NR/BR blend and its

nanocomposites with various amounts of Na-MMT were prepared.

Characterization of the Nanocomposites

X-ray diffraction (XRD) analysis was performed using a Philips Analytical X-ray diffractometer. An acceleration voltage of 40 kV and 25 mA were applied using CuZ"a radiation with wavelength X = 0.154 nm. The diffraction curves were obtained within the range of scattering angles (29) of 1°—10° at a scan rate of 1°/min.

Tensile and tear tests on the specimens were performed using a Zwick/Roell Tensile tester at a stretching speed of 500 mm/min for tensile test and 50 mm/min for tear test at the ambient temperature (25°C) according to ISO 37-1994. A Zwick hardness tester was employed according to ASTM D2240 to measure hardness (Shore A) of the prepared samples. Abrasion tests were performed according to ASTM D2228 on a Zwick abrasion tester. The abrasion was defined as inverse of the mass loss of a sample. To measure each property, five specimens were tested and average values were reported.

Thermogravimetric analysis (TGA) was per