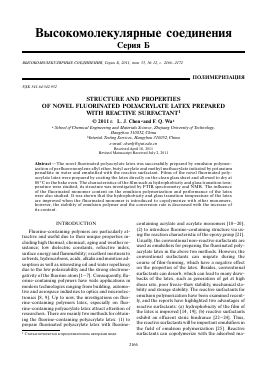 a School of Chemical Engineering and Materials Science, Zhejiang University of Technology,

Abstract—The novel fluorinated polyacrylate latex was successfully prepared by emulsion polymerization of perfluorononylene allyl ether, butyl acrylate and methyl methacrylate initiated by potassium persulfate in water and emulsified with the reactive surfactant. Films of the novel fluorinated polyacrylate latex were prepared by coating the latex directly on the clean glass sheet and allowed to dry at 80°C in the bake oven. The characteristics of the film such as hydrophobicity and glass transition temperature were studied; its structure was investigated by FTIR spectrometry and NMR. The influence of the fluorinated monomer content on the emulsion polymerization and performance of the latex were also studied. It was shown that the hydrophobicity and glass transition temperature of the latex are improved when the fluorinated monomer is introduced to copolymerize with other monomers, however, the stability of emulsion polymer and the conversion rate is decreased with the increase of its content.

Sodium 2-hydroxy-3-(methacryloyloxy) propane-1-sulfonate (HMPS), which is the copolymerized stabilizer with good properties, can be copolymerized with other vinyl group monomers, e.g., acrylate, vinyl acetate and styrene because the C=C bond in the

HMPS has high reactivity. In the present paper, using the intermediate perfluoro nonene and 3-allyl alcohol as the staring reactants (see Scheme 1), we would like to report the convenient method to synthesize new fluorinated polyacrylate latex by the emulsion polymerization technique with the reactive surfactant (see Scheme 2). The emphasis is put in the present work on the structure and the properties of the novel fluorinated polyacrylate latex.

BA and MMA were distilled under reduced pressure prior to polymerization. HMPS was of industrial grade and purchased from Foshan Kodi Gas Chemical Industry Co., LTD. Potassium persulfate and sodium bicarbonate were used as received. The water used in this experiment was distilled followed by deionization.

Perfluorononylene allyl ether (PFAE) was prepared according to Scheme 1. Triethylamine and 3-al-lyl alcohol were introduced into a three-necked flask with the stirrer. Acetone was then added into the flask and was agitated for 5 min with the stirrer. Perfluoro nonene was added dropwise within 3 h at room temperature. The reaction continued for 5 h after perfluoro nonene was dripped completely. The resulting mixture was dissolved in 2.5% HCl solution to separate the mixture. The lower layer was washed with 5% HCl solution and then with the distilled water. The obtained liquid was dried with Na2SO4. Finally, the liquid was purified further with reduced pressure distillation. FTIR spectrum of PFAE is shown on Fig. 1. As is seen, 1613 cm-1 is the characteristic stretching peaks of C=C bond; 1428 cm-1, 966 cm-1 and 753 cm-1 are

The results obtained confirmed that PFAE had been prepared.

In copolymerization we used the mixture of monomers, which consisted of16.00 g BA, 8.00 g MMA and varying amount of PFAE. A homogeneous aqueous solution containing 110.0 g de-ionized water, 0.90 g NaHCO3 and 2.00 g HMPS was charged into a 250 ml four-neck flask equipped with reflux condenser, mechanical stirrer, dropping funnels and heated with the water bath. The stirring speed was maintained at 200 rpm throughout the runs. The reaction temperature was increased to 80°C within 30 min. An initiator solution containing 0.18 g potassium persulfate and 6.0 g de-ionized water and a monomer mixture containing 4.00 g BA and 2.00 g MMA were charged to the reactor to form the seed latex within 15 min. The seeded polymerization was continued for an additional 10 min. At that point, the rest of initiator solution and mixed monomers was added slowly to the reactor using two separate dropping funnels. The feeding time for the initiator and the monomer emulsion stock solutions were 3.5 and 3.0 h, respectively. After the feed

was completed, the temperature was raised to 90 °C and maintained for another 30 min to increase monomer conversion. The latex was then cooled to below 40°C, and NH4OH (25 wt. %) was added to increase the pH to about 8.0. Finally, the mixture in the flask was cooled and filtered. Thus, the latex was obtained.

FTIR spectrometric analyzer (Thermo Nicolet AVATAR370, USA) was used to analyze the chemical structures of the latex films. *H-NMR and 19F-NMR spectra were recorded with Bruker AVANCE 500MHz (Switzerland) spectrometer. CDCl3 was used as internal reference for chemical shift of and 19F. The amount of coagulum was measured by collecting the solid deposited on the reactor walls and stirrer, and by the residual of filtered latex. It is expressed as the weight of coagulum per total weight of monomer added. Conversion rate was determined by the mass difference of a sample taken before and after evaporation of the liquid phase. The sample was dried completely, and the residual polymer was weighed. The contact angle between film and water was determined with the DataPhysics contact angle meter (0CA-20, Germany) at room temperature. DSC (DSC Q100, USA) was applied to determine the glass transition temperature of the film of the latex. The heating temperature was in the range from -40 to 100°C. The heat rate was 10 K/min. The film of latex is obtained from coating the latex on the clean glass and drying for 2 h at 80 °C in the bake oven. In the case, the water and un-reacted monomers were removed completely.