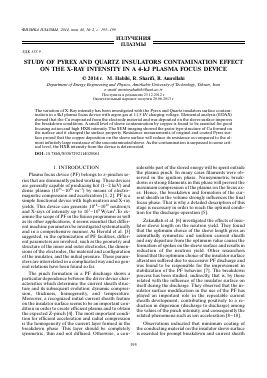 The variation of X-Ray intensity has been investigated with the Pyrex and Quartz insulators surface contamination in a 4kJ plasma focus device with argon gas at 11.5 kV charging voltage. Elemental analysis (EDAX) showed that the Cu evaporated from the electrode material and was deposited on the sleeve surface improves the breakdown conditions. A small level of sleeve contamination by copper is found to be essential for good focusing action and high HXR intensity. The SEM imaging showed the grain-type structure of Cu formed on the surface and it changed the surface property. Resistance measurements of original and coated Pyrex surface proved that the copper deposition on the sleeve surface will reduce its resistance as compared to the almost infinitely large resistance of the uncontaminated sleeve. As the contamination is surpassed to some critical level, the HXR intensity from the device is deteriorated.

Plasma focus device (PF) belongs to z-pinches series that are dominantly pulsed working. These devices are generally capable of producing hot (1—2 keV) and dense plasma (1025—1026 m-3) by means of electromagnetic compression and acceleration [1, 2]. PF is a simple functional device with high neutron and X-ray yields. This device can generate 1018-1020 neutron/s and X-rays of intensity up to 107-109 W/cm2.To examine the scope of PF in the fusion programme as well as its other applications, it seems essential that different machine parameters be investigated systematically and in a comprehensive manner. As Herold et al. [3] suggested, in the optimization of PF facilities, different parameters are involved, such as the geometry and structure of the inner and outer electrodes, the dimensions of the electrodes, the material and configuration of the insulator, and the initial pressure. These parameters are interrelated in a complicated way and no general relations have been found so far.

The pinch formation in a PF discharge shows a particular dependence between the driver device characteristics which determine the current sheath structure and its subsequent evolution: dynamic compression, thickness, homogeneity, and temperature. Moreover, a recognized initial current sheath feature on the insulator surface seems to be an important condition in order to create efficient plasma and to obtain the expected Z-pinch [4]. The most important condition for efficient acceleration and radial compression is the homogeneity of the current layer formed in the breakdown phase. This layer should be completely symmetric, thin and not diffused. Otherwise, a con-

siderable part of the stored energy will be spent outside the plasma pinch. In many cases filaments were observed in the ignition phase. Nonsymmetric breakdown or strong filaments in this phase will prevent the maximum compression of the plasma on the focus axes. Hence, the breakdown and formation of the current sheath in the volume strongly influences the final focus phase. That is why a detailed description of this stage is necessary in order to reach the optimal condition for the discharge operation [5].

Zakaullah et al. [6] investigated the effects of insulator sleeve length on the neutron yield. They found that the optimum choice of the sleeve length gives an azimuthally symmetric and uniform current sheath and any departure from the optimum value causes the formation of spokes on the sleeve surface and results in reduction of the neutron yield. Other researchers found that the optimum choice of the insulator surface alteration suffered due to successive PF discharge and was found to be responsible for the improvement in stabilization of the PF behavior [7]. The breakdown process has been studied, indirectly, that is, by those related with the influence of the insulator surface on itself during the discharge. They observed that the insulator surface modification in the use of the PF has played an important role in the repeatable current sheath development, contributing positively to a reduction in dispersion (discharge to discharge) among the values of the pinch intensity, and consequently the related phenomena such as ion acceleration [8-10].

formation, since the copper deposition on the sleeve surface will reduce its resistance as compared to the almost infinitely large resistance of the uncontaminated sleeve. The lower resistance of the sleeve surface in turn will help the breakdown and current sheath formation. One may speculate that during the breakdown and current sheath formation, high-Z impurities somehow appear which increase the mass content in the current sheath and hence lower the velocity during the axial run. After the glass sleeve had sustained some 100 plasma shots, multiple focusing spikes appear in almost every shot. When the cumulative discharge energy across an insulator sleeve exceeds about 1 MJ, copper deposition on the sleeve surface makes it rough with a grain-type structure. This decreases the resistance of the sleeve surface which in turn may therefore increase the current partition and lower the snowplow efficiency. The system becomes less reproducible and shot-to-shot variations in the neutron yield become pronounced. In a plasma focus, the plasma in contact with the electrode material before the radial phase and therefore the material does get evaporated, but the time scale involved in the phenomena are too fast. As a result, little attention was given to the effect of electrode material on radiation yield in plasma focus devices.

In this paper, we have studied the effect of insulator sleeve contamination on hard X-ray (HXR) intensity registered by a fast plastic scintillation detector.

In this project, the measurements were undertaken with a 4 kJ Mather-type PF device which is powered by a 40 ^F and 30 nH capacitor.

Experiments were carried out with argon as the filling gas at 11.5 kV charging voltage with a discharge energy of ~2.4 kJ per shot. As it is shown in Fig. 1, an insulator sleeve with a length of 5.2 cm, a thickness of 0.3 cm and an inner diameter of 3 cm slides over the anode. Optimum pressure at the applied voltage of 11.5 kV is determined as 0.95 Torr. Some conditioning shots are fired at the optimum pressure before recording the data, to ensure that the readings are recorded for the best condition. After five shots, the previous gas is purged and fresh gas is filled to minimize the effect of impurities accumulated in the working gas. In order to measure the time-resolved HXR emission, a fast plastic scintillation detector is used. The detector (NE 102A, a 5-cm long, 5-cm-diameter cylinder) coupled with a high gain photomultiplier tube biased at — 1.1 kV, is located horizontally in the side-on position [13].

Typical signals of the Rogowski coil and plastic scintillator for three different numbers of shots are plotted in Fig. 2. Rogowski coil signals are registered to choose only discharges with a high degree of current sheath symmetry. As the shot number increases, the hard X-ray intensity decreases.

To investigate how the impurity content in the focus plasma varies with the contamination of the Pyrex sleeve and how it could influence the detraction of HXR intensity by the increase of shot number we analyzed the surface for both the contaminated Pyrex sleeve and an uncontaminated one. Fig. 5 shows an image of the Pyrex insulator that was used in this experiment. As it is clear, the affective surface of contaminated Pyrex in Fig. 1 isn't crystalline in proportion to the original Pyrex.

The insulator sleeve was made of Pyrex and according to the EDAX analysis which is shown in Fig. 5, (for two different points on insulator surface), it is composed of (as percentage of weight): 45% oxygen, 2.1% sodium, 2.3% aluminum, 50% silicon, and less than 1% potassium.

The information about the insulator surface topography which was obtained by SEM imaging from the Pyrex (Fig. 6, at two different values of electronic magnification) indicated that before using the insulator on plasma focus it has a flat surface without any impurity.