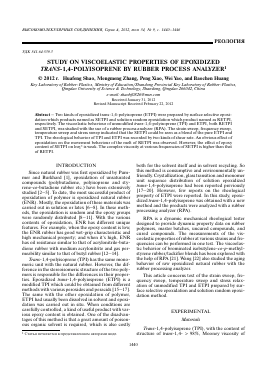 Abstract — Two kinds of epoxidized trans-1,4-polyisoprene (ETPI) were prepared by surface selective epoxi-dation which products named as SETPI and solution random epoxidation which product named as RETPI, respectively. The viscoelastic behaviour of unmodified trans-1,4-polyisoprene (TPI) and ETPI, both RETPI and SETPI, was studied with the use of a rubber process analyzer (RPA). The strain sweep, frequency sweep, temperature sweep and stress sweep indicated that the SETPI could be seen as a blend of the pure ETPI and TPI. The rheological behavior of TPI and ETPI was recorded by two kinds of shear rate. An obvious effect of epoxidation on the movement behaviour of the melt of RETPI was observed. However, the effect of epoxy content of SETPI on lnn* is weak. The complex viscosity at various frequencies of SETPI is higher than that of RETPI.

Since natural rubber was first epoxidized by Pum-mer and Burkhard [1], epoxidation of unsaturated compounds (polybutadiene, polyisoprene and sty-rene-co-butadiene rubber etc.) have been extensively studied [2—5]. To date, the most successful product of epoxidation of polymer is epoxidized natural rubber (ENR). Mostly, the epoxidation of these materials was carried out in solution or latex [6—8]. In these methods, the epoxidation is random and the epoxy groups were randomly distributed [8—11]. With the various contents of epoxidation, ENR has different unique features. For example, when the epoxy content is low, the ENR rubber has good wet-grip characteristic and high mechanical property; and when it's high, ENR has oil resistance similar to that of acrylonitrile-buta-diene rubber with medium acrylonitrite and gas permeability similar to that of butyl rubber [12—14].

Trans-1,4-polyisoprene (TPI) has the same monomeric unit with the natural rubber. However, the difference in the stereoisomeric structure of the two polymers is responsible for the differences in their properties. Epoxidized trans- 1,4-polyiosprene (ETPI) is a modified TPI which could be obtained from different methods with various peroxides and peracids [15—17]. The same with the other epoxidation of polymer, ETPI had usually been dissolved in solvent and epoxidation was carried out in situ. When conditions are carefully controlled, a kind of useful product with various epoxy content is obtained. One of the disadvantages of this method is that a great amount of poisonous organic solvent is required, which is also costly

both for the solvent itself and in solvent recycling. So this method is consumptive and environmentally unfriendly. Crystallization, glass transition and monomer unit sequence distribution of solution epoxidized trans-1,4-polyisoprene had been reported previously [17—20]. However, few reports on the rheological property of ETPI were reported. In this study, epoxidized trans-1,4-polyisoprene was obtained with a new method and the products were analyzed with a rubber processing analyzer (RPA).

RPA is a dynamic mechanical rheological tester designed to provide dynamic property data on rubber polymers, master batches, uncured compounds, and cured compounds. The measurements of the viscoelastic properties of rubber at various strains and frequencies can be performed in one test. The viscoelastic behavior of brominated isobutylene-co-^-methyl-styrene rubber/tackifier blends has been explored with the help of RPA [21]. Wang [22] also studied the aging bahavior of raw epoxidized natural rubber with the rubber processing analyzer.

Peracetic acid, at a concentration about 2 mol l-1, was prepared by the reaction of 98% acetic acid with 35% hydrogen peroxide at 303 K.

Other chemicals and solvents were purchased as good laboratory grades.

Surface selective epoxidation (the pretreatment aqueous suspension method): The TPI powder was initially pretreated with pretreating agent at room temperature for 24 h. Then with the dropwise addition of peracetic acid and stirring, the epoxidation was carried out in a 2000 ml at 303 K. After 1.5 h, the epoxidized polymers were filtrated from the reaction mixture and treated with 1.0 M Na2CO3 solution to neutralize the acid and decompose the unreacted hydrogen peroxide. Then the samples were washed with water and kept overnight in a 0.1 M Na2CO3 solution. Finally, the products were dried at 313 K under vacuum for 48 h. Through controlling the initial mole ratio of the TPI and peracetic acid, ETPI with different epoxy degree was obtained directly.

Solution random epoxidation. The ETPI polymer was prepared by the addition of appropriate amounts of freshly prepared peracetic acid to a 5% stirred TPI solution in chloroform at 303 K. After 1.5 h the epoxi-dized polymer was isolated by methanol precipitation and purified by reprecipitation from chloroform. The polymer was vacuum dried at 313 K for 48 h.

The 1H-NMR spectra was obtained in a 5-mm tube with 5% solution of the samples in deuterochloroform with a BrukerFT/AC-80 spectrometer using tetrame-thylsilane as internal reference.

Quantitative analysis was carried out by integration of characterization peaks area to get the content of epoxidized polymer. The chemical shift at 5.08 and 2.68 ppm, assigned to the olefinic and epoxy methane protons, were used for calculating the epoxy content of the polymer [20]. The epoxy content (D) was calculated by the following equation:

Ring-opening reaction is negligible since no signals appeared in the region of formyloxy proton at around 8.00 ppm.

RPA (RPA 2000, Alpha Technologies) was used to measure the viscoelastic properties of epoxidized rubbers. RPA is capable to a temperature accuracy of ±0.1 K and can be operated with strain and frequency sweeps in wide ranges of strain amplitude and temperature. In this work, three different types of tests, temperature sweep, frequency sweep, and strain sweep were programmed in RPA.

The strain sweep was carried at a frequency of 60 cpm (cycle per minute) and at a temperature of 373 K. Shear storage modulus (G'), loss modulus (G") and complex viscosity (n*) were recorded.

In frequency sweep, strain and temperature were kept constant, whereas the frequency was varied in a preprogrammed way. Frequency sweep was carried at 373 K and the applied strain was 0.5 degree arc (about 7% strain). Shear storage modulus (G'), loss modulus (G") and complex viscosity (n*) were recorded at each frequency.

Temperature sweep was carried out at 0.5 degree arc (7% strain) and 60 cpm (cycle per minute). The temperature was varied from 353 to 453 K. Shear storage modulus (G') and loss modulus (G") were recorded at each temperature.

Unlike epoxidation of solution method, with pre-treatment aqueous suspension method, the particle of ETPI wasn't dissolved by good solvent of TPI. The powder was first swelled by appropriate solvent (see Fig. 1) and the swelled particle suspended in solution. With the addition of peracetic acid, epoxidation was carried at the surface and amorphous area of TPI because the pretreating agent can't permeate crystalline region. Compared with solution method, SETPI obtained with the pretreatment aqueous suspension method has low content of epoxy and the epoxy groups were not randomly distributed on macromolecules. According to the work of A.E. Woodward [18], the double bonds which in the amorphous and crystal sur-