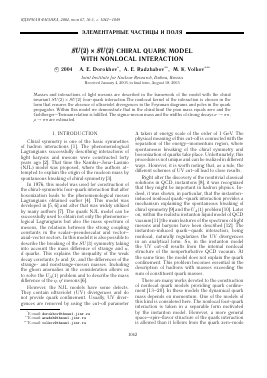 Masses and interactions of light mesons are described in the framework of the model with the chiral invariant SU(2) х SU(2) four-quark interaction.The nonlocal kernel of the interaction is chosen in the form that ensures the absence of ultraviolet divergences in the Feynman diagrams and poles in the quark propagator. Within this model we demonstrate that in the chiral limit the pion mass equals zero and the Goldberger—Treiman relation is fulfilled. The sigma-meson mass and the widths of strong decays a ^ nn, p ^ nn are estimated.

Chiral symmetry is one of the basic symmetries of hadron interactions [1]. The phenomenological Lagrangians successfully describing interactions of light baryons and mesons were constructed forty years ago [2]. That time the Nambu—Jona-Lasinio (NJL) model was proposed, where the authors attempted to explain the origin of the nucleon mass by spontaneous breaking of chiral symmetry [3].

In 1976, this model was used for construction of the chiral-symmetric four-quark interaction that after bosonization leads to the phenomenological meson Lagrangians obtained earlier [4]. This model was developed in [5, 6] and after that was widely utilized by many authors [7]. The quark NJL model can be successfully used to obtain not only the phenomeno-logical Lagrangians but also the mass spectrum of mesons, the relations between the strong coupling constants in the scalar—pseudoscalar and vector— axial-vector sectors. In this model it is also possible to describe the breaking of the SU(3) symmetry taking into account the mass difference of strange and u, d quarks. This explains the inequality of the weak decay constants fn and fK, and the differences of the strange- and nonstrange-meson masses. Including the gluon anomalies in the consideration allows us to solve the UA(1) problem and to describe the mass difference of the n, n' mesons [6].

However, the NJL models have some defects. They contain ultraviolet (UV) divergences and do not provide quark confinement. Usually, UV divergences are removed by using the cut-off parameter

A taken at energy scale of the order of 1 GeV. The physical meaning of this cut-off is connected with the separation of the energy—momentum region, where spontaneous breaking of the chiral symmetry and bosonization of quarks take place. Unfortunately, this procedure is not unique and can be realized in different ways. However, it is worth noting that, as a rule, the different schemes of UV cut-off lead to close results.

Right after the discovery of the nontrivial classical solutions in QCD, instantons [8], it was recognized that they might be important in hadron physics. Indeed, it was shown, in particular, that the instanton-induced nonlocal quark—quark interaction provides a mechanism explaining the spontaneous breaking of chiral symmetry [9] and the UA(1) problem [10]. Later on, within the realistic instanton liquid model of QCD vacuum [11] the main features of the spectrum of light mesons and baryons have been described [12]. The instanton-induced quark—quark interaction, being nonlocal, naturally regularizes the UV divergences in an analytical form. So, in the instanton model the UV cut-off results from the internal nonlocal structure of the nonperturbative QCD vacuum. At the same time, the model does not explain the quark confinement. This problem becomes essential in the description of hadrons with masses exceeding the sum of constituent quark masses.

There are many works devoted to the construction of nonlocal quark models providing quark confinement [13—20]. In these models the dynamical quark mass depends on momentum. One of the models of this kind is considered here. The nonlocal four-quark interaction is taken in a separable form motivated by the instanton model. However, a more general space—spin—flavor structure of the quark interaction is allowed than it follows from the quark zero-mode

arguments. Namely, the four-fermion couplings in different channels are fixed directly from the meson mass spectrum. Further, we use one of the simplest ansatz for the nonlocal kernel, which allows us to obtain the dynamically generated quark propagator without poles. Our model is close to the model [17]. However, our choice of the nonlocal kernel is motivated by the existence of the nonlocal quark condensate in QCD.

The paper is organized as follows. In Section 2, we consider a nonlocal four-quark interaction and after bosonization derive the gap equation for dynamical quark mass. The nonlocal kernel is defined in Section 3. In Section 4, the masses and couplings of the scalar and pseudoscalar mesons are obtained and the main parameters of the model are fixed. The verification of the Goldberger—Treiman relation is given. In Section 5, calculations of the p-meson coupling constant, gp, and the decay width p ^ nn are given. The axial-vector meson, a1, and the n—a1 mixing are also considered. The last section is devoted to the discussion of our results.

where q(x) = (u(x),d(x)) are the u and d quark fields, mc is the diagonal matrix of the current quark masses, Gn, Gp, and Gai are the coupling constants of the scalar—pseudoscalar, vector, and axial-vector quark currents, correspondingly. The nonlocal quark currents JI(x) are expressed as

where the nonlocal function f (x) normalized by f (0) = 1 characterizes the space dependence of the quark condensate. In (2) the matrices rI are defined

where Ta are the Pauli matrices and 7^, y5 are the Dirac matrices.

In this article, we mainly consider the strong interactions. The electroweak fields may be introduced by gauging the quark field by the Schwinger phase factors (see, e.g., [17, 21, 22]). This method is used in derivation of the Goldberger—Treiman relation.

After bosonization the action becomes

where a,n,p,a1 are the a, n, p, a1-meson fields, respectively. The field a has a nonzero vacuum expectation value (a)o = a0 = 0. In order to obtain a physical scalar field with zero vacuum expectation value it is necessary to shift the scalar field as a = a + a0. This leads to appearance of the nonlocal quark mass m(p2) instead of the current quark mass mc.

where mq is dimensional parameter, which plays the role of the constituent quark mass. These relations result from the solution of the gap equation

Nc is the number of quark colors. In the leading order of the 1/Nc expansion the quark propagator S(p) with dynamical mass is given by

Let us remind that in the instanton model the nonlocal function f (p2), defining the kernel of the nonlocal four-quark interaction, is expressed in terms of the profile function of the quark zero mode. In [17], taking the same separable form of the kernel, the function f (p2) was chosen in the Gaussian form. This choice also removes UV divergences, but in addition provides the quark confinement. Here, we follow different ideology. Namely, close to [13] we demand absence of pole singularities in the scalar part of the quark propagator 1)1

what constrains the model parameters mq and A as

where e is the base of exponent. As a result, only one parameter remains free. This is due to equivalence of the third case to the choice of normalization condition m(p2 = pi) = s/pl.

Note, that the left side of (8) coincides with the nonlocal quark condensate if the quark propagator is taken in the form (7) [23]. The function Q(p2) is considered as an entire function in the complex

p2 plane, decreasing in the Euclidean domain at p2 ^ to. In particular, in this work the Gaussian function is used:

where n and A are arbitrary parameters. At each p Eq. (8) has the following solutions:

1. There is some region of real p2, where p2Q2(p2) > 1. This situation leads to the appearance of complex values of the quark mass. We do not consider this case further.

2. The relation p2Q2(p2) < 1 is fulfilled in the whole domain of real p2. Then from two possible solutions we can use only the solution m-(p2) which decreases at p2 ^ to:

3. The function p2Q2(p2) equals 1 at a single real point p2. In this case the continuous mass function is